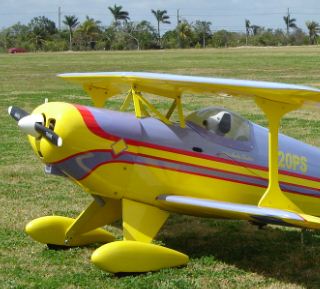 Converting a 1/3-scale aerobat from glow to electric comes with a host of considerations: which motor and mount to use? What voltage and amperage battery packs? What size prop works best? And last but not least, does it need a safety arming switch? In this article, Joe Ziomek of Islamorada, Florida shares how he converted an RC Guys 1/3-scale Pitts to clean, reliable electric power.

When Andy Sheber and I conceived and drew plans for a1/3 Pitts S1 for glow power back in the early 80s, electric powered flight was a dream as the batteries (NiCd) and motors (brushed type) and speed controllers were not able to even sustain flight when installed in an ultralight free flight model. 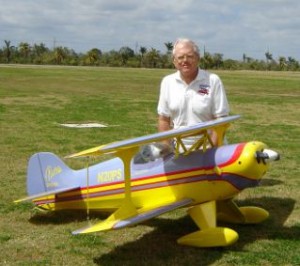 Since then the advent of LiPo batteries, power MOSFET/IGBT transistors and brushless motors with neodymium magnets have made true electric conversion and equality with both gasoline and glow fuel motors possible.
The RC Guys Pitts S1 is the lightest 1/3-scale Pitts ARF available on the market. It reflects our scratch model building heritage with a lightweight, tough design. The model weight at 12 to 14  pounds with motor and 1572 sq. in. of wing area makes this Pitts a superb candidate for electric conversion. 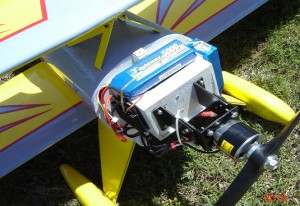 Total electric power weight is 4.9 pounds or an addition 14 oz. of weight which is easily carried by the 1572 sq. in. of combined wing area.

Pitts Conversion:
The glow motor mount was removed along with the fuel tank and the throttle servo. A new electric motor mount was fabricated or the Great Planes extra large mount (GPMG 1265) can be used (same weight). The thrust lines were made the same as the glow motor. The firewall had 2 degrees of right thrust and 2 degrees of down thrust so the mount was bolted to the firewall directly and the thrust lines were lined up using a small square. The forward location of the motor was determined by fitting the cowl back on and measuring the distance from the front of the cowl to the E-flite 1.6 motor thrust washer. The Great Planes mount can be easily adjusted to this required dimension distance thrust washer to front of cowl.

E-flite 1.6 motor Performance and prop selection.
The motor was mounted, the e Silver Series ESC was screwed to the side of the motor box and three 3S 5000 mah batteries were installed with Velcro around the motor box.

A selection of props was made based on the e Flite recommendation from 18X8 to 20X10 of various brands ie  APC, Power Prop and Master Airscrew composite.

Since the Plane was not designed for e power and the batteries are mounted under the cowl, when the batteries are installed the motor is armed, the cowl is installed, and the propeller is installed, the system represents a possible problem if an unintended event would occur. If the receiver is powered by a separate battery pack, the receiver is off and the ESC should not turn on the motor.

Installing a separate safety switch or fuse is recommended to ensure that the motor will not function until the pilot is ready for flight.

Solution: A separate 100ampere Maxi Fuse is installed in series with the interconnection wires between the three battery packs. The fuse holder is installed low on the firewall and the fuse is inserted from below the cowl and behind the propeller arc. The 100 amp Maxi Fuse is available from Crutchfield (crutchfield.com) and is used for high power audio systems. The fuse holder is available from DC Power LLC (www.dcpwr.com) and comes with a #8 red wire attached. The #8 wire is cut and soldered into the wire of the battery series connection wiring.  When ready for flight the Maxi Fuse is installed from below the cowl and all is safely ready for flight.

Safety Before Flight:
With the considerable power, 2200 watts, 75 amps and over 30 volts, safety is a must consideration. I decided to insert a fuse into the battery circuit. The Maxi Fuse can be used up to 100 amps. I located the fuse holder from Crutchfield Electronics, RF RFFM 100 amp Maxi Platinum Plated Wafer Fuse ($4.99).

The MAXI Style Inline Fuse Holder from DC Power LLC (wes@dcpwr.com) with #8 gauge wire ($4). The fuse holder has a loop of #8 gauge wire that is soldered into the battery circuit. Locating the fuse holder at the bottom of the firewall at the normal exhaust exit, the batteries, esc, prop, spinner and all can be safely installed. Then at the last the MAXI fuse is inserted and all is safely ready to go since the fuse can be inserted from behind the prop arc from below the cowl.

First Flight July 29, 2010
The first flight as always is a stomach churner. The amount of initial torque available from the brushless electric motor versus the glow motor is very dramatic. Make sure you have two clicks of right rudder trim in before takeoff or the Pitts may surprise you with its acceleration torque pull to the left and climb.

Loops, rolls, inverted no problem. Sadly the 6 minute mark came, and it was time to set up the approach and land to allow 2 minutes for a missed approach.

Biplanes have a lot of drag so do not try for a full stall landing but fly it onto the deck and then cut the power. Remember that the rudder can be ineffective at a high angle of attack as it can be blanked by the fuselage so keep some power on until you are on the runway.

Good luck with your conversion to the E Pitts S1E.