On Feb. 1, 2003, (15 years ago), the Space shuttle Columbia disintegrated over Texas. This is the Miami Herald’s original coverage from that day.

Space shuttle Columbia, carrying a cross-section of America’s human treasure and the first Israeli astronaut, disintegrated in flames Saturday over Texas. All seven astronauts died.They never had a chance. Astronauts have no way to escape a shuttle as it streaks through the atmosphere without power and at 13,000 miles an hour to a landing at Cape Canaveral. 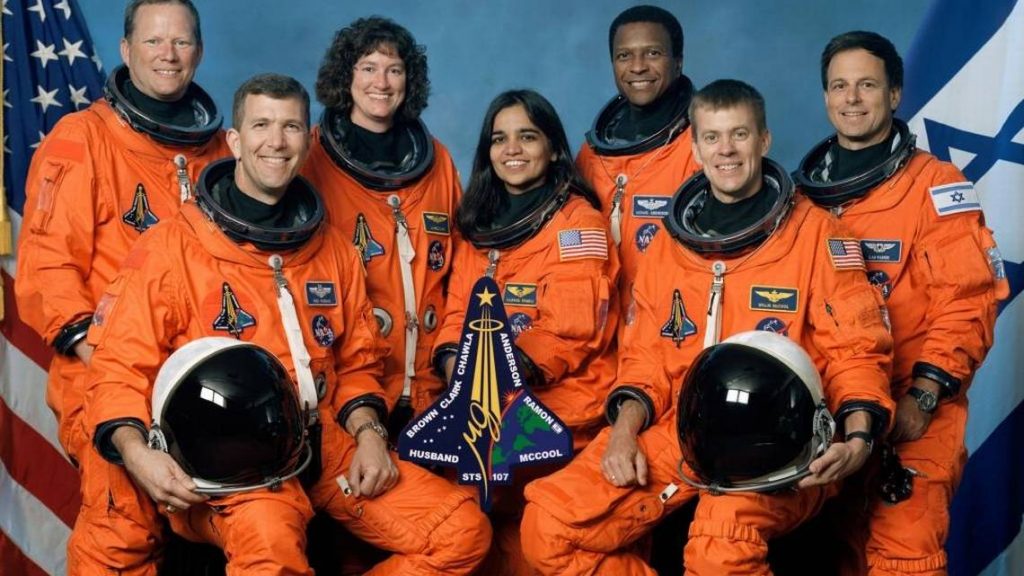 Initial speculation about the cause focused on possible damage sustained by the shuttle’s left wing during blastoff 16 days earlier. The crew included three U.S. military officers, one of the nation’s few black astronauts and a woman who immigrated to America from India. Six were married. Among them, the astronauts of shuttle Columbia had 12 children.

Astronauts are pioneers on the frontiers of space and they depend on muscular but fragile technology and the machines failed them Saturday.“I take the risk because I think what we’re doing is really important,” Michael Anderson, 43, Columbia’s payload commander, said before the shuttle blasted off from Cape Canaveral on Jan. 16. It was the shuttle program’s 113th mission and second major disaster.

“This day has brought terrible news and great sadness to our country,” President Bush said. “The Columbia is lost. There are no survivors.

“The crew of the shuttle Columbia did not return safely to Earth, yet we can pray they all are safely home. May God bless the grieving families.”

No cause was immediately apparent, but sensors aboard Columbia reported a sudden spike of intense heat, an indication that the ship’s heat shield had been breached — possibly on that left wing. The temperature at that point of reentry: 3,000 degrees. The altitude: 207,135 feet, the equivalent of 39 miles above Earth. Government officials said there was no indication of terrorism and the shuttle was well out of the range of missiles when the accident occurred.

The president and others vowed that the human space program would continue, after a lengthy investigation. “It’s more than a job, this is a passion for us,” said Ron Dittemore, NASA’s shuttle program manager. “There’s going to be a period of mourning in this community, then we’re going to fix this problem and we’re going to get back on the launch pad.”

The shuttle was only 16 minutes from the landing strip at the Kennedy Space Center when NASA lost communications with it. The last word from Columbia came at 9 a.m. from Rick Husband, 45, the shuttle’s commander and an Air Force colonel: “Roger.”

Then, a muffled sound. Then, only static. Residents far below reported hearing a loud bang. Tragically reminiscent of the January 1986 explosion that destroyed shuttle Challenger and killed all seven astronauts on that ship, Saturday’s accident scarred the sky with smoke and debris, and failure, and death.

Debris rained over hundreds of miles of Texas fields and highways, stretching from near Dallas all the way to Louisiana. Residents reported finding metal fragments and piles of ash and what appeared to be a door of the shuttle. In Hemphill, Texas, near the Louisiana border north of Jasper, debris and human remains were scattered across more than 50 sites, authorities said.

Some debris was also found in Newton, Jasper and San Augustine counties. Several hundred workers from state, local and federal agencies logged the location of the evidence, tagged it and placed it in bags.

Authorities throughout the region urged residents not to touch or even approach the debris. It could contain hazardous material, experts said, and it could carry vital clues to the cause of Columbia’s demise.

Early today, recovery crews were still conducting the grim, agonizing search for human remains. NASA engineers and managers launched the first phase of a painstaking search for the cause.

Early speculation centered on an explosion caused by a structural defect or the possibility that crucial, heat-protecting tiles on the shuttle’s left wing were damaged when they were struck by a piece of fuel-tank insulation during blastoff.

NASA engineers concluded during the flight that any damage to the wing was minor and posed no safety hazard — an assertion certain to be tested during a probe that NASA Administrator Sean O’Keefe promised would be complete and vigorous.

Flags were lowered to half-staff at the White House, the Capitol, the Kennedy Space Center in Central Florida, the Johnson Space Center near Houston and at countless other locations around the nation.

At the Kennedy Space Center, spouses and children of the astronauts were gathered from the landing strip after the accident and taken to a secluded location. A NASA official said they were “bearing up under the grief.”

In addition to Anderson, who grew up on military bases and was black, and Husband, a former test pilot, also aboard Columbia were:

All but Brown were married. Ramon had four children, McCool had three, Anderson had two, Husband had two and Clark had one. Ramon, McCool, Brown and Clark were space rookies.

Before the 16-day scientific flight, Ramon spoke evocatively about the symbolic nature of his assignment — and its meaning to his people.

Though a secular Jew, he planned to observe the Sabbath, when possible, and eat kosher food aboard the shuttle. He called it an “act of solidarity with Jewish tradition.”

“I was born in Israel,” said Ramon, “and I’m kind of the proof for the whole Israeli people that whatever we fought for and we’ve been going through in the last century — or maybe in the last 2,000 years – is becoming true.” 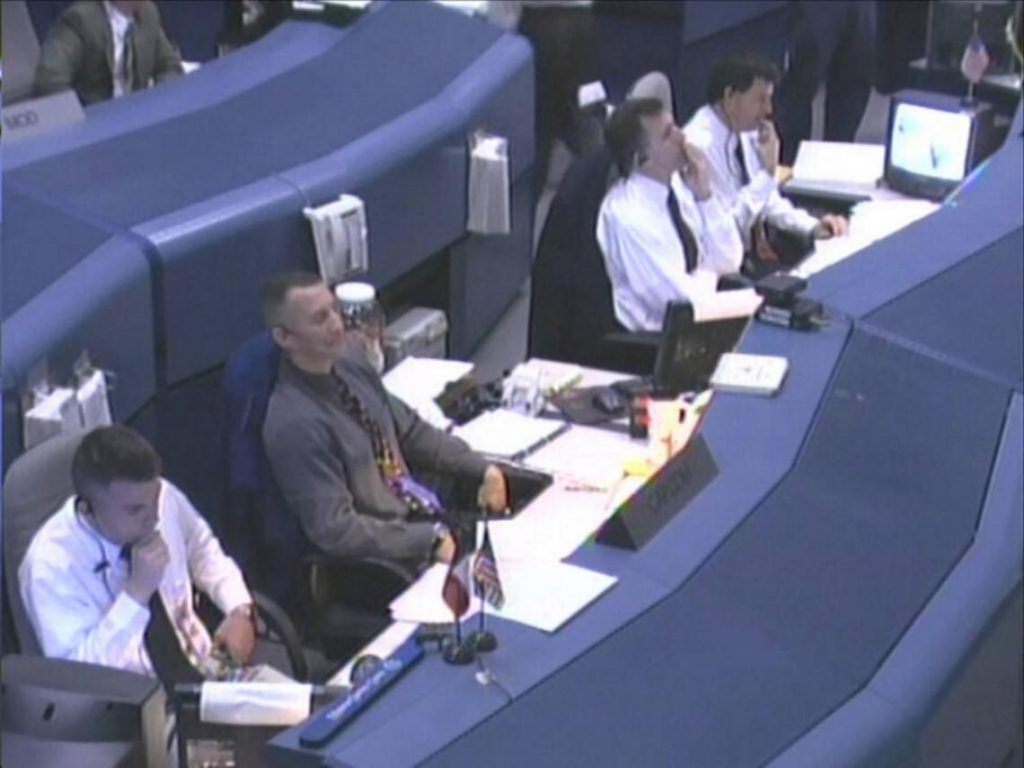 (Above) In this image from television on Feb. 1, 2003, NASA mission control in Houston, Texas, wait to hear from the space shuttle Columbia. Space shuttle Columbia disintegrated in flames over Texas minutes before it was to land in Florida. TV video showed what appeared to be falling debris, as NASA declared an emergency and warned residents to beware of falling objects.

Clark, another rookie, echoed his words.

“This is my first flight and I’m very excited,” she said before liftoff. “I can’t wait to look down on our planet from space.”

The oldest shuttle in the fleet, Columbia was inaugurated in flight on April 12, 1981. This was its 28th trip to space.

It was supposed to land at the Kennedy Space Center at 9:16 a.m. EST.

NASA reported shortly after 9 a.m. that it had lost contact with the returning spaceship. At Mission Control near Houston, flight controllers stared solemnly at their computers.

The shuttle and crew were over north-central Texas at that time, according to NASA.

“It kind of sounded like something hit the top of our house, almost,” said Courtenay Hanson, 34, who lives north of Dallas. “We were sitting at the kitchen table, and the house rumbled. The windows rumbled.”

They walked outside a few minutes later.

“We could see two white streaks,” she said. “We watched them go from over our house out into the horizon.”

Courtenay’s 4-year-old daughter, Caitlin, watched the streaks and asked what had happened.

Despite the assurances of government officials, suspicions of terrorism or sabotage were likely to be aroused because of the presence onboard of Ramon, the first Israeli astronaut.

Ramon’s father, Eliezer Wolferman, was watching the landing at an Israeli television studio. At first, Wolferman expressed hope that what they were seeing was “just a little mistake.”

When he and broadcasters learned about the shuttle, the cameras panned away, respecting the man’s privacy.

In Viera, about 30 miles south of the Kennedy Space Center, Brad Bettin of Melbourne stood outside a Wendy’s at lunchtime. He noticed a flag outside, and he slowly lowered it to half staff. “I just stopped to get my son food, saw this and it didn’t belong up,” he said.

With the shuttle likely to be grounded for a lengthy period, the fate of the already controversial space station was in serious doubt.

Costing taxpayers $52.7 billion and scheduled to take more than six years, the space station is the most ambitious U.S. space project since the Apollo moon landing. Its construction requires dozens of shuttle flights.

The current occupants of that station — NASA astronauts Ken Bowersox and Don Pettit and Russian Nikolai Budarin — can return to earth aboard Russian spacecraft. The quasi-independent Aerospace Safety Advisory Panel and other experts have been warning NASA for years about the dangers of an aging shuttle fleet and the need for safety upgrades that have been delayed because of a lack of funds. In the recent past, then-NASA Administrator Dan Goldin had been candid about the inherent hazards of space flight.