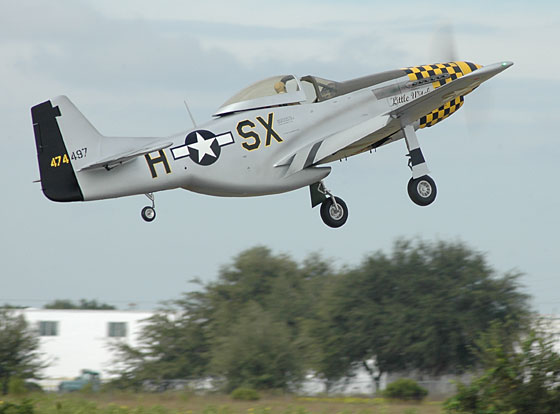 If the chilly weather is starting to set in where you are and you’re looking to extend your RC Summer. You’re getting ready to winterize that big AMR 1/3-scale Waco you finished last Spring and have flown for the past 6 months. You’re really comfortable with it now; it looks perfect in the air and gets even more “ooohs and aaahs” than it did when you first brought it out. Rather than “early retirement” to the workshop to embark on that new “Winter” project, how about a trip to Florida to spend some time with RCers who feel the same way you do and share similar passions in their models?

If you haven’t heard of it before, “Monster Planes USA” is the brainstorm of Frank Tiano and the event has just celebrated its third year and all indications are that it will continue to grow as more and more RC flyers become acquainted, and involved, with large scale models. By large scale, for this event anyway, means a 35 pound MINIMUM weight with the typical model coming in at significantly higher than that. The new, forthcoming AMA ruling certainly will go a long way to stimulating further activity in this exciting segment of R/C modeling. The ruling will raise the weight limit of models requiring inspection from 55 pounds to 125 pounds for prop-driven models and 100 pounds for jets. Propeller-driven models of less than 77 pounds may be certified by the owner/builder signing an affidavit attesting to the fact that the model was built to, and complies with, AMA generated guidelines. Models weighing 78-125 lbs. (prop) will still require inspection and certification in the “Large Scale Model” class, (formerly the Experimental category.) All of this is a result of a lot of work being performed by a lot of people involved in large scale modeling working towards a common objective from which we may all benefit.

In addition to the new site, the event has adopted a new schedule which seems to work well. Rather than a Friday, Saturday, Sunday period, the event scheduled was shifted to the left, with the first day being Thursday wrapping things up at the end of the day on Saturday. This revised format seems to be finding favor around the country since the Sunday of multi-day event ends up being a “travel” (return home) day for participants who have traveled distances which adversely impacts the quantity of flying on Sunday.

In addition, like many of the larger events held around the country; only 2.4 gHz radios were permitted, no crystal-controlled could be used. I didn’t realize just how helpful this seemingly small point was; it eliminates the need for a transmitter impound area, reduces the potential for accidental turn on “hits” to zero and allows use of transmitters in the pits for final system tweaking without the need for DSC cords. Seems like a good idea to me!

A quick weather report for the event….near perfect! An event like this, with specialized models, always produces some outstanding examples of craftsmanship, finishing and flying. While not a “competition” (although many awards are presented), any number of the models I saw were clearly competition caliber but were being sport flown throughout the meet. A largest number were built from kits, attesting to the potential market for these sized models, but a lot of them were “blow-ups” of existing “Giant Scale” models from designers like Ziroli, Vaillancourt, Jerry Bates and other well known modelers. A perfect example was the C-47 Gooney Bird from Tim Redelman. It spanned 144” and was powered by a pair of Q-100 engines which easily hauled the behemoth around in a very scale-like fashion and took the Runner-Up, Best WWII award. Paul Westrich also took the path of blow-up, using Glenn Torrance Models plans as the basis for his ½ SCALE Fokker D-VI. A spectacular model, it was DA150 powered swinging a 32×14 prop and tipped the scale at 86 pounds making it the heaviest model of the meet, just ahead of Shelly Smith’s 84 pound Super Decathlon.

In spite of the large number of great models on hand, it’s hard not to have some “favorites”. Three come immediately to mind; Denny DeWeese’s Bf-109 K-4 from the Dino Digiorgio’s Meister Scale stable of designs. Everything on this model looked great; paintwork, surface detail, markings, canopy, everything. If there was one thing that seemed “not quite right” to me, strictly from memory of drawings and photos, was the dihedral angle. Seemed a bit too much but I’m sure with the attention to detail Denny has lavished on the model, his documentation will stand the test of eventual competition. Scott Prossen’s Grumman F4F Wildcat, from the imported  Fisher Models kit, finished in simulated natural metal and powered by a Moki 250 radial provided a sound not to be believed and seemed to fly with authority as validated by receipt of the Best WWII award. Limiting this list to three is difficult but I would have to include the Me-163 “Komet” scratchbuilt by Joe Saitta and powered by a JetCat P120 turbine. It was almost 1/3- scale with a 103-inch span and, as good as it looked, its flying qualities were remarkable with a speed range that was amazing. It was one of those models that was a pleasure to watch, even for guys like me who have been involved for a while!

From a general public/spectator standpoint, the new facility is well laid out with easy access, nothing blocking the view of the flightline, plenty of great spots for picture taking, an ample supply of comfort stations, lots of food and beverage vendors and a team of host club members doing a great job of running things smoothly. Couple all this with the ongoing, informative narration from announcer Sam Wright and you’ve got an event that everyone seems to enjoy, and from which many of us come away inspired. If not to participate but to return and just enjoy a great event! As you’re reading this, just take a look out the window….check the temperature…..hope to see you there next year!