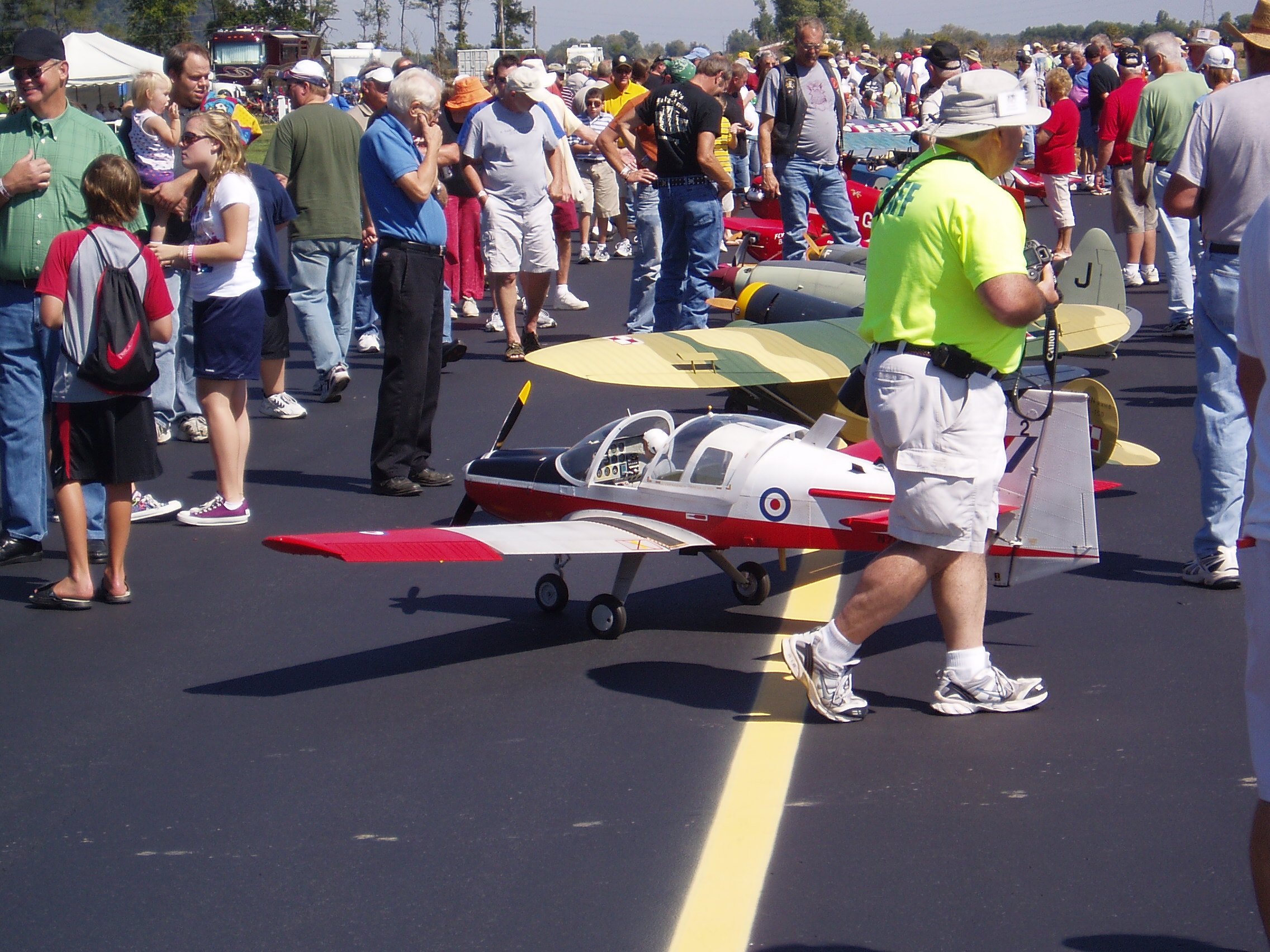 (Above) A tradition of the Masters is the noon walk around. The crowd is allowed to view the models up close and ask the contestants all about their aircraft. Here we see Bob Patton’s Scottish AV Bulldog in the foreground.

The 31st annual U.S. Scale Masters Championships was flown for the first time in Rosewood Indiana just across the river from Louisville Kentucky. What a great time meeting up with old friends and meeting new modelers with the same passion for scale as the old friends! We were blessed by calm winds and sunny skies for the majority of the flying rounds with a little moisture to keep the dust down during the static judging at the start of the contest on Thursday. This year 36 qualified contestants competed and came from all over the United States and from as far away as Brazil, Canada, England and Australia officially making it an international event. 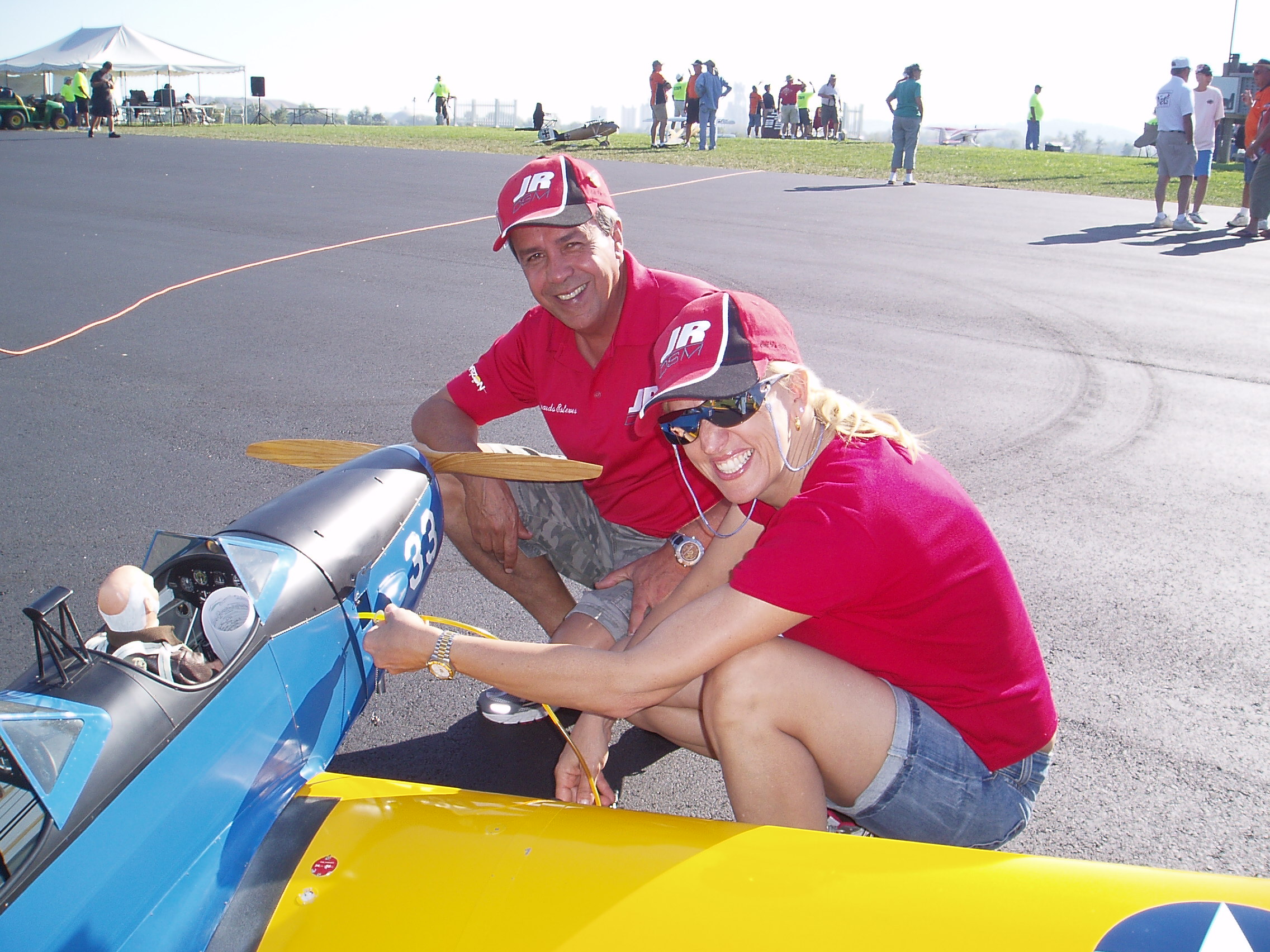 The U.S. Scale Masters was founded by 5 avid RC’rs from southern California that put together a regional qualifier concept that remains today. This was designed to highlight the scale aspect of radio control modeling during an era when pattern flying seemed to be dominating the contest scene. The “Masters” goal is to attract new people interested in building and flying scale RC aircraft by providing a forum to showcase building and flying skills. The “Masters” is also unique in that it is the only contest remaining that rotates East coast then West coast each year. This gives everyone the chance to fly in the Masters provided they qualify at one of 23 regional qualifiers across the US and Canada. Keeping the founders dream alive remains successful under the leadership of Carolyn Van Herk and the board of directors. Check out the website at: scalemasters.org and find out where the closest qualifier is to you and give it a try! You can even download the latest U.S. Scale Masters Competition Guidebook for learning how you can be successful competing in the scale circuit.

This years Masters was hosted by the Ohio River View RC Flyers with Mike Caldwell and Michael Hunt (president) leading the team. http://orvrcf.com/. Earl Devers Sr. provided many hours of his own time to ensure everything was in place and ready to go. The event was mentioned in several newspapers plus Contest Director Dale Arvin and Vanguard Leader Michael Hunt were featured on WHAS Channel 11 morning edition to help bring in hundreds of spectators seen throughout the weekend. Dale was very pleased with the outstanding help and support from the many volunteers who met every month for over a year in preparation to make this one of the smoothest run Masters on the books. 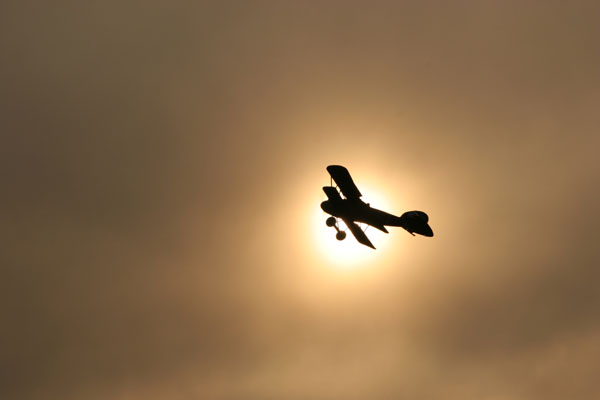 (Above) A WWI Albatross heads out on a dawn patrol Saturday morning. Photo by Gus Dattilo

(Gus, a local modeler showed up with his professional camera and provided over 750 excellent photos over the 4 days of the event. They can be seen by going to the Masters webpage and clicking on the link). Our sponsors this year really pulled through even though these are uncertain times about our country’s financial stability. There were a total of 33 sponsors made up of companies, individuals and RC clubs that provided funds and prizes for the event with 11 from the local area. It was great to see so many modelers from local clubs pitching in to provide support.

We are especially grateful to our faithful sponsors Hobby People/Airtronics and Bob Smith Industries who year after year provide the funds and prizes that help keep the dream alive. Let’s remember them when we need our next radio or glue to keep the projects moving off the work bench and into the skies above.

Sponsors of “Best Of” Awards:

Special note and thanks go to Bill Beach, avid RC modeler and president of Beach Mold & Tool who provided funds and the incredible flying site. He purchased 120 acres along the Ohio River and developed the property to become a world class RC flying site. 800 feet of seamless paved asphalt runway 8” thick and 50 feet wide sits alongside a golf green smooth grass runway with 150 feet of over run on each side. Built in sprinkler systems keep it watered and the paved parking and spectator area included stadium seating providing full viewing of the action for the hundreds of spectators that attended each day. Paved taxi ways and buried power and speaker cables keep the wires out of trip hazard way. He could be seen running the lawnmower up and down the runway prior to the event. He installed a PA system and buried the wires for the event. Bill totally enjoyed himself meeting all of the modelers and seeing their incredible scale aircraft.

(Above) Bill Beach with the half time demonstration jet. Photos by Gus Dattilo 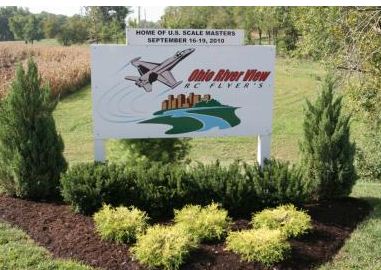 (Above) Bill had the entryway landscaped and a sign for this event made up… 1st class all the way!

The contest starts on Thursday morning with static judging held under a large pavilion at the field. This is where you present your model to the judges who compare your model to the documentation that you provide. For example if the 3-view drawing shows a pitot tube the model should have a pitot tube in the same place and shape as on the drawing. One judge will compare the outline of the aircraft, one will compare the color, one will compare markings and one judge will walk around not closer than 3 feet to inspect your craftsmanship. This judge has a tough job as they look for anything that suggests “Model” such as exposed control horns or control rods.

Static Scores were very close and shows the judges had a workout trying to find any mismatch from the documentation presented by the contestant to the actual model being reviewed.

After static the contestants usually gather at the headquarters hotel for some fun and laughs in the hospitality suite. This year this was provided by our host hotel Holiday Inn Express and Pacer Industries for the refreshments (thank you Herschel Worthy!). The flying was noticeably “professional” as commented by many of the flight judges this year. With optimum flying conditions the models seemed to float on by as if on rails. The downside of this condition is any visible wing waggle or pitch change is most likely the result of shaky hands from a nervous pilot so the precision component of the score can be affected. 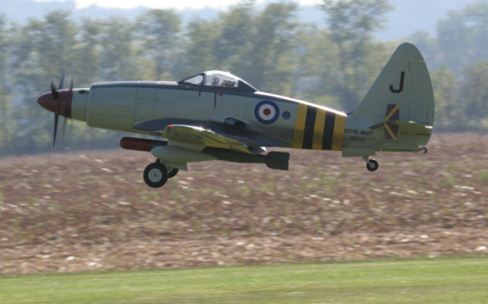 (Above) )One of the most interesting sounding aircraft to attend this year’s Scale Masters was Dave Wigley’s Westland Wyvem S4. The front prop freewheeled in the opposite direction causing turbulence with the rear prop and the sound it made was very distinct. Dave said this was an unintended design surprise!

There were 4 classes flown.

John Boyko’s Pitts coming in for a nice landing. John is an inspiration for all of us Photos by Gus Dattilo 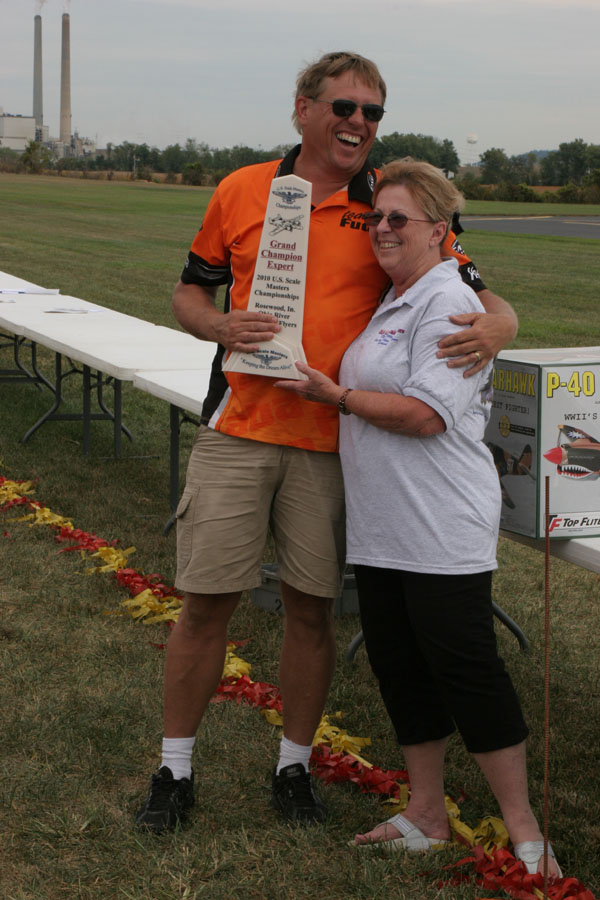 Congratulations Dave from all of us! You are a true sportsman indeed! This year’s flying was enhanced by thick calm air creating almost dream conditions the slow flying WWI aircraft. The fly-bys were rock solid and the aircraft seem to float on by without any wing wiggle or bobble. If this doesn’t inspire you nothing will! 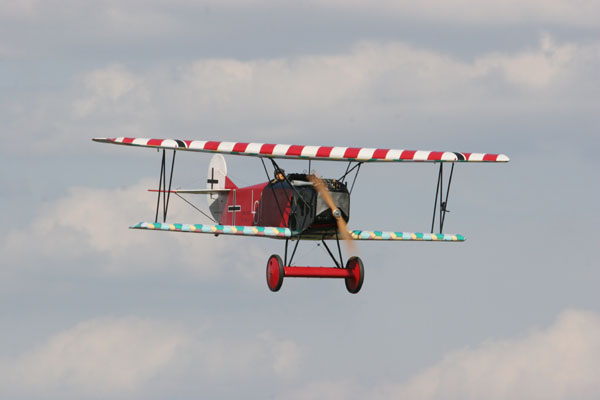 (Above) Billy Thompson’s Fokker DVII looks ominous coming in for a strafing pass. Billy took 4th place in Expert with a respectable 193.33 overall score. It was great to watch him fly this big aircraft. 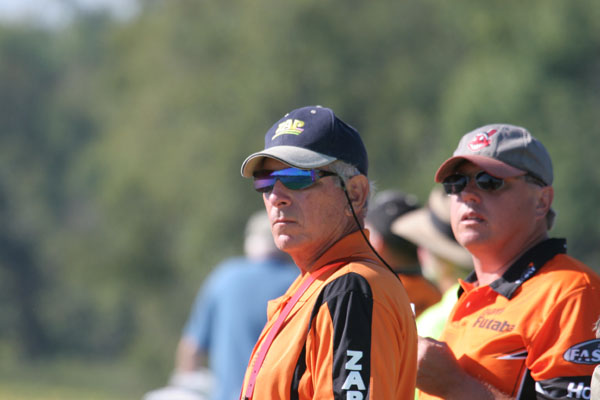 Above) It takes a lot of concentration when flying in front of the judges. Here we see team pilot and past Masters winner Dennis Crooks flying Dave Semerao’s Albatross D.Va. This is the first time Dennis has flown WWI in the Masters and with his win, completes his wins with each vintage; WWI, WWII, Civilian and Jet class.

An awards banquet was held on Saturday night to recognize those individuals for their outstanding building and flying skills and one very special award; the Harris Lee Lifetime Achievement award. 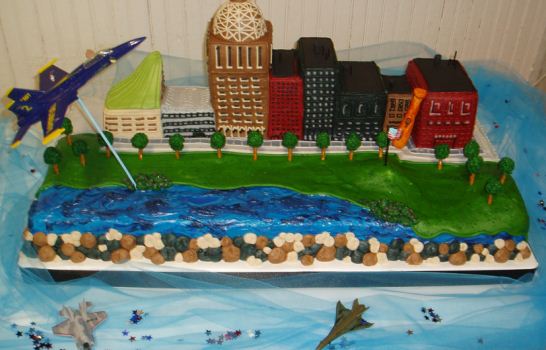 (Above) One of the two cakes we had for dessert after the excellent meal Saturday night at the Knights of Columbus Hall in New Albany Indiana.

(Above) It was great to see Roy Vaillancourt once again, it’s been years since we have seen him at the Masters but he still is one of the best. Check out his Hawker Typhoon down and dirty on a slow fly by.

There was so much more to report on that exceeds the allotted size of this article. Check out the additional photos and information on the U.S. Scale Masters website at: http://www.usscalemasters.org/forums/

I hope you can make it next year to experience this wonderful event for yourself and your family.

Find your nearest Masters Regional Qualifier and get qualified so we can see you on the flight line! 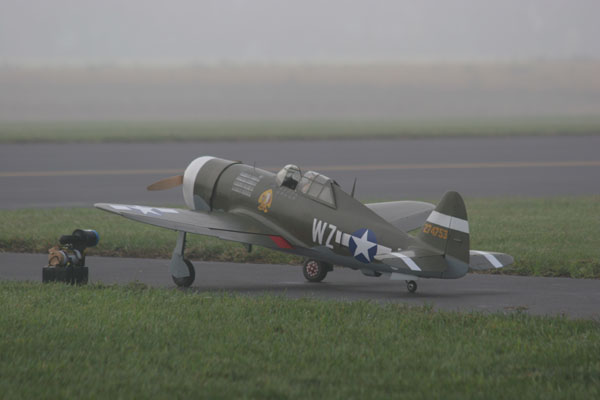