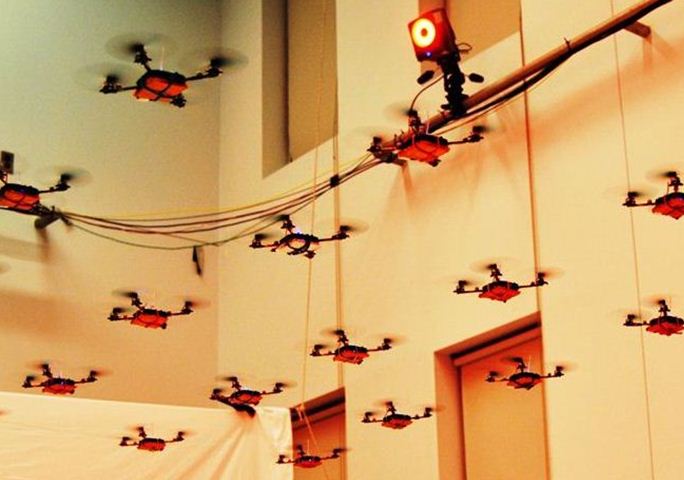 We liked this piece by Slate’s technology columnist, Farhad Manjoo. His article is subtitled, “Quadcopter drones are amazing and cute and will probably destroy us all.” Read on for Farhad’s interesting take as well as video of a micro quadcopter recital as well as a quadcopter “blooper” reel.

It was way back in May 2010 that I first spotted the flying drones that will take over the world. They were in a video that Daniel Mellinger, one of the robots’ apparently too-trusting creators, proudly posted on YouTube. The clip, titled “Aggressive Maneuvers for Autonomous Quadrotor Flight,” depicts a scene at a robotics lab at the University of Pennsylvania, though a better term for this den might be “drone training camp.”

In the video, an insectlike, laptop-sized “quadrotor” performs a series of increasingly difficult tricks. First, it flies up and does a single flip in the air. Then a double flip. Then a triple flip. In a voice-over so dry it suggests he has no idea the power he’s dealing with, Mellinger says, “We developed a method for flying to any position in space with any reasonable velocity or pitch angle.” What does this mean? It means the drone can fly through or around pretty much any obstacle. We see it dance through an open window with fewer than 3 inches of clearance on either side. Next, it flies and perches on an inverted surface—lying in wait.

Stare at this long enough and you could mistake the scene for something adorable—birds building a nest. But by this time you’ve stopped staring. Instead, you’ve opened another browser tab to look for good deals on bomb shelters and MREs.

Over the last couple years, videos like these ones from UPenn have become a mainstay of science and tech blogs. Every few weeks, there’s a new one showing drones swarming, mapping, surveilling, building, and generally wowing us with ever greater powers. Many of these flying objects are built by grad students at robotics labs, often in preparation for the International Aerial Robotics Competition. (That tournament will take place in North Dakota this summer.) The mission of this year’s competition: build a drone that can silently enter a heavily guarded, Osama Bin Laden-like compound and remove a USB flash drive from the top of an officer’s desk.

At the same time, a vibrant hobbyist community has emerged around drones. DIYDrones—founded by Wired editor and accomplished drone-maker Chris Anderson—collects pictures, videos, and how-tos from hundreds of amateurs around the world. The site suggests that making drones has become the world’s best geeky dad-and-kid hobby, the modern take on model airplanes and backyard rockets.

If this were a popularity contest, the UPenn team’s bots would have long ago sealed up the top spot. Altogether, the clips on Mellinger’s YouTube channel have been viewed 10 million times. This week, the UPenn quadrotors were given their widest, geekiest audience yet: They were featured in an irresistible TED presentation by professor Vijay Kumar, who directs the UPenn lab. Near the end of the TED talk, the team shows off an experiment that I suspect was designed to prove that these robots aren’t scary—but that ends up being the most horrifying thing of all. Together, the bots use specially modified musical instruments to play the James Bond theme.

Autonomous quadcopters at the University of Pennsylvania’s GRASP Lab play the James Bond Theme song, with quadcopters on piano, guitar, percussion and maracas. They even rock a makeshift instrument made of strings stretched across a couch frame.

In a series of videos Mellinger posted throughout that summer, we see the robot learn even more terrifying skills. It pirouettes in an ellipse. It gets a “claw-like” gripper that allows it to pick up objects, and then it learns to “cooperate” with other drones and pick things up together. It learns to land on surfaces, and to recover when its landing attempts fail; this, along with an added camera, gives it the ability to conduct “autonomous surveillance.” It figures out how to fly through several obstacles in a row and then, amazingly, through moving obstacles—it slips through a Hula Hoop that Mellinger throws up in the air. About a year ago, Mellinger posted a video showing a team of three drones building structures out of large metallic beams. The machines fly in a terrifying, coordinated ballet, each of them picking up a beam, finding the exact spot where it should be placed, and gingerly snapping the object in place.

A few weeks ago, after I read the Stanford political scientist Francis Fukuyama had built his own drone, I called him up to talk about their national security implications. Fukuyama, who describes himself as a techie and hobbyist, told me he finds drones incredibly exciting. “It’s a really neat idea that ordinary people can own and operate and make this level of technology,” he said.

He went on to describe a variety of ways that drones could alter warfare. Unmanned drones have allowed the American military to use fewer and fewer ground forces during combat. But today’s military drones have many shortcomings—they can only operate from very high up, they can only spy or kill, and they frequently kill civilians. You can imagine swarming nano drones allowing for much better performance: They could take the place of on-the-ground Special Forces troops, and even of covert operatives. In an article in the Financial Times—under the headline “Why we all need a drone of our own”—Fukuyama wrote:

The technology is not standing still. Down the road are insect-sized drones that could be mistaken for a housefly or spider, which could slip in under a door-sill to record conversations, take photos or even inject a lethal toxin into an unsuspecting victim. Systems such as these are under development by the Army’s Micro Autonomous Systems and Technology (Mast) programme, in partnership with a variety of corporations and university labs. Further into the future are nanobots, particle-sized robots that could enter people’s blood streams or lungs.

And, of course, we can’t count on being the only ones to use this technology, Fukuyama points out. At the moment, the United States enjoys asymmetric access to drones, but as the technology gets easier to put together by amateurs, every country and a horde of non-state combatants—criminals, drug cartels—will be able to do scary stuff with drones. “There could also be an anonymity to their use that doesn’t exist now with other technologies,” Fukuyama says. That could make it a perfect weapon for terrorists. “Someone is going to connect the dots sooner or later.”

The implications of these drones—for good and for ill—haven’t yet been puzzled out. That’s why it’s hard not to be filled with wonder and dread when I watch these machines do some amazing new thing. There’s no doubt about it: Drones will rule our future. We ought to start talking about how we’ll deal with them.

Thank goodness, though, they’re not perfect yet. For now, take some solace in this video of the UPenn drones’ bloopers. Laugh until you weep.