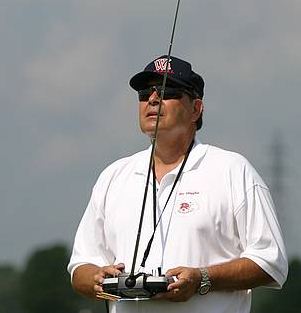 The aeromodeling world lost one of its best September 1 when Ric Vaughn, longtime E Nats CD and driving force behind the SEFF electric fly, succumbed to cancer.  Internet modeling forums were quickly swamped with tributes and farewells to one of the best-liked guys at any flying event.

I got to know Ric in my early days in electric flight.  He was a driving force behind the rapid improvements in electric sailplanes and LMR (limited motor run) competition at E Nats, and he won countless national championships.  But Ric wasn’t there solely to collect hardware; he would freely share his hard-won knowledge with other competitors in the belief that it was more important to raise the state of electric flight than to rack up wins for himself.  Toward that end he wrote a series of online articles on the ins and outs of LMR competition and served a stint as NEAC president.  But more than all that, Ric was also a friend and a character.

He had an infectious sense of humor, and his ingeniously tricked-out trailer/shop was a happy gathering spot at any flying event.

One of my favorite memories of Ric was when he was demonstrating his own-design LMR sailplane at the 2010 NEAT Fair.  On launch the massive torque of the big folding prop wrenched the motor completely out of the fuselage, and the big custom-molded sailplane pitched up into a stall. Ric coolly stepped forward and caught the sailplane in a perfect reverse of the launch.  I’ve never seen a more impressive failed launch, and the cheers were long and loud.

In addition to being a lifelong aeromodeler, Ric was a career airline pilot and senior captain for United Airlines.  His commercial career began in DC-3s and ended in 777s, and yet after thousands of hours in the air he still had that almost childlike fascination with all things that fly.  For Ric it never got old.

In addition to his modeling and aviation pursuits, Ric was an avid motorcyclist and spent years riding high performance bikes on the winding roads of the Southeast US.  He was a national class shooting competitor, and competed in air pistol at the 1984 Summer Olympic Trials.  If there was fun to be had, Ric would find it.

Ric is survived by his charming wife Rebecca and by son “RC”, daughter in law Kate and granddaughter Aydin.  Rebecca asks that in lieu of flowers, donations be sent to the Children’s Cancer Research Fund www.childrenscancer.org.