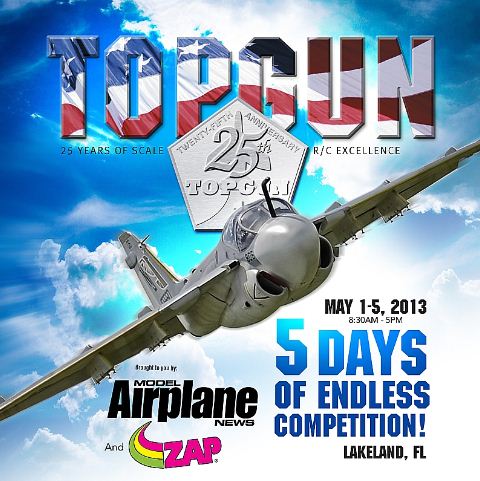 Be there or Be Square!

Top Gun 2013 Invitational is exactly what the name says. It is the best of the best by invitation only competing for over $25,000 in cash and prizes, and to see who may acquire the title of “Mr. Top Gun”. There are also numerous awards of excellence given out each year. Top Gun is the equivalent of a world championship!!!

Top Gun 2013 is a scale contest, and by that we mean that each aircraft entered is a replica of a full-scale aircraft. Scale aircraft from each era of aviation from WWI through today’s jet aircraft are flown, both civilian and military. From the model aircraft’s outline, color scheme and attention to details, a static score, of 100 points maximum, is generated from a panel of judges. Those static scores are not released until late in the completion. After static judging, each pilot will fly his aircraft four times, for a flight score of 100 points maximum. In each round of flying the pilot completes ten maneuvers, and each is scored on a scale of 0 — 10. The highest three flight scores are averaged and that result is added to the static score for a final score which determines where the competitor has placed in the competition. An overall champion, in addition to class champions, is determined at the conclusion of the event. That overall champion — “Mr. Top Gun 2013” is one of the single most coveted awards an r/c model aviation pilot may ever earn.

Various classes include: Expert, Masters, Team, Unlimited and Pro-am. Up to five places earn awards at the end of the event in each class. There are many r/c pilots who travel to central Florida each year from distant origins. About 30 — 40% of the contestants are international. FTE prides itself in providing a selection of interesting things to do while attending one of its events. In addition to watching exciting flying all day, there is usually a “not to be missed” mid-day Air Show with some spectacular “acts” as well as a considerable number of model aviation related vendors, selling or demonstrating a wide variety of merchandise. There is a great food court featuring a covered dining area. Admission is only $10 for adults (children under 12 are free) and EVERY TICKET IS A PIT PASS ——-

Bring your lawn chair, or take advantage of one of a thousand complimentary chairs, and make a day of it. You won’t be disappointed!

All events are held at Paradise Field at the Lakeland Airport. Enter from the West Pipkin Road Sun n Fun entrance just west of the GEICO building.