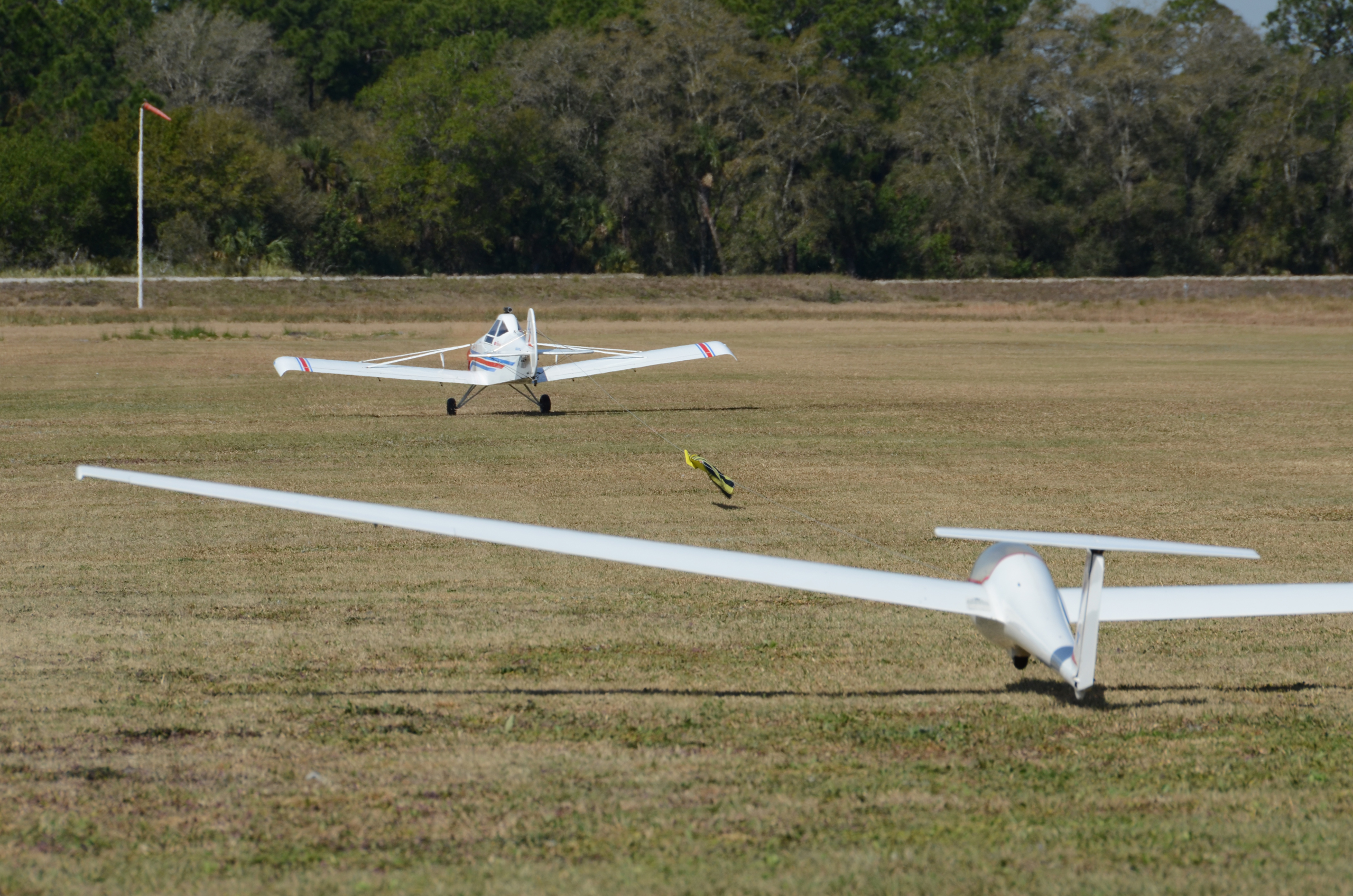 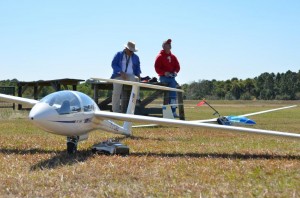 March 15-17, 2013 has come and gone and the Indian River Kontrol Society’s Second Annual Aero tow is now history. The venue was the Space Coast Aeromodeling Park at the Central Disposal Facility. The IRKS Club is indebted to the outstanding support provided by the folks who provide security and work the landfill. 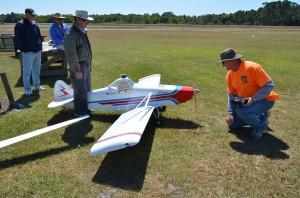 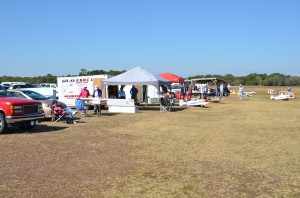 There were many entries this year!

Our Contest Directors for the aero tow is Kris Van Nostran and Co-CD, Steve Formanek. Many volunteers worked tirelessly signing in the contestants and guests, registration, safety observation, refreshments and general order of the event. Friday started out with the pilot’s meeting and Kris spared no detail. Safety! And pilot awareness of the tow-plane and glider pilots was emphasized. . Each had their role and were briefed on both how to tow and for the glider pilot!..how to follow the tow-plane. 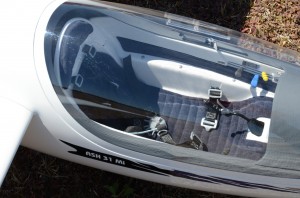 Owners took great pride in their aircraft. A little larger and I would be taking a nap about now! 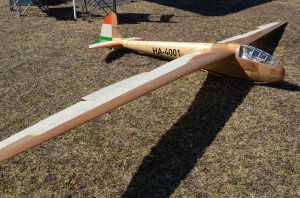 Dave DeGroodt brought his immaculate Hungarian “Nemere”. This models was planked entirely of 1/64th ply. Yes! the plywood application is “scale” and replicates the full scale aircraft very accurately! The full-scale aircraft was built in 1936. Now, can anyone tell me why there are only 4 Olympic rings? 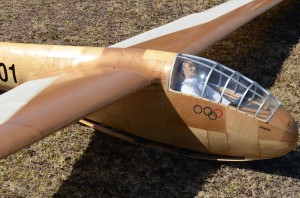 Beautiful detail of the canopy and ply-wood planking. Note there are only 4 Olympic rings.. 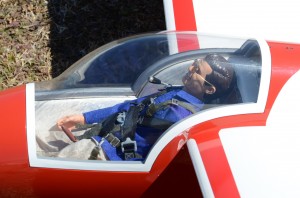 This guy is toooo comfortable! 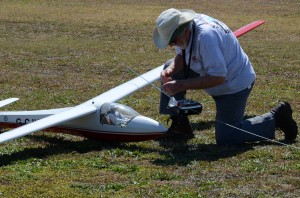 Who is that setting in my seat??

Some models had scale pilots who were  impersonating their owners! 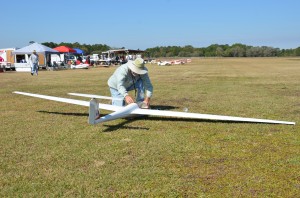 Dan Johns gets ready for a tow! 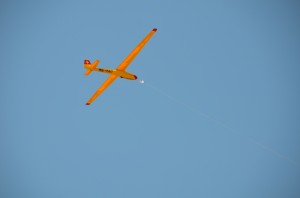 KA8 being towed to altitude. 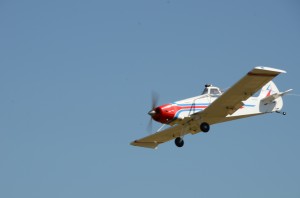 The Piper Pawnee returns for another tow…

Each aircraft possessed the necessary set-up for tow-line release. The glider pilot can release his aircraft from the tow-line, when he is satisfied with the altitude. The tow-plane release is mostly for emergencies. Should the glider get into trouble, the tow-plane pilot will inform the glider pilot he is releasing the line. I didn’t see this during the entire event. I did see, however, the glider and tow-plane release the tow-line almost Simultaneously. This happened more than once. A youngster was summoned and became a popular lad who would “fetch” the line. Heck it was only a ¼-mile walk… one way! 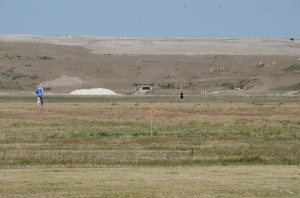 The tow-plane would Inadvertently drop the tow-line and bystanders would chase after them.

During one of the tow-line retrievals, the lad found a pair of expensive eyeglasses previously lost by another pilot. This made for a quick $20, for his efforts! 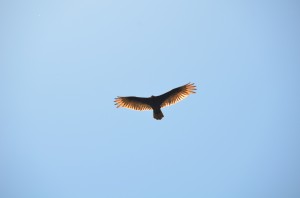 There were plenty of birds to show us where to fly for maximum lift!

What a relaxing event! Well, there were times when the Seagulls and Buzzards insisted on participating. They didn’t even bother to pay!! Wait, these guys really know how to soar! Watching the birds catch thermals were visual indicators of where to go and the pilots soon welcomed the birds. 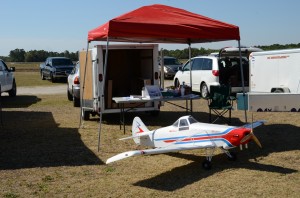 There were many entries and the gliders ranged in size to over 6 meters. The popular tow-plane for the day was the Hangar 9 Piper Pawnee. With a 130” wingspan and a DLE/DLA 112-110cc power plant up front, there was power to spare! 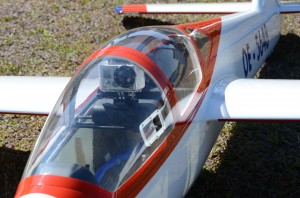 GoPro cameras are becoming a popular instrument in aerial photography 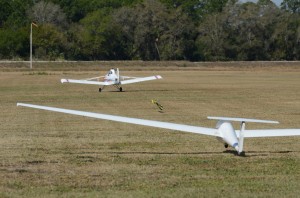 Kris’ DG1000 lifts-off ever so gently, in unison with Mark’s Pawnee. Tow Pilot-Glider Pilot coordination at its best!

Ray Alonzo won the duration event with a flight over 40 minutes long. He was forced to land or be charged for overnight camping. Just kidding… He really did have to force himself down… Thermals were that good Saturday!! 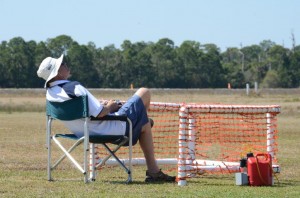 Ray closes the event for Saturday!

Until next time… Keep’m high and dry, right-side up!!