The Desert Hawks RC club of Lake Havasu City has always put on a great show with their annual London Bridge Seaplane Classic and the 33rd event was no exception.  When most of the Northern third of the country has seen their first frosts many seaplane fans gather on the shores of Lake Havasu, Arizona for the largest float fly in the country. 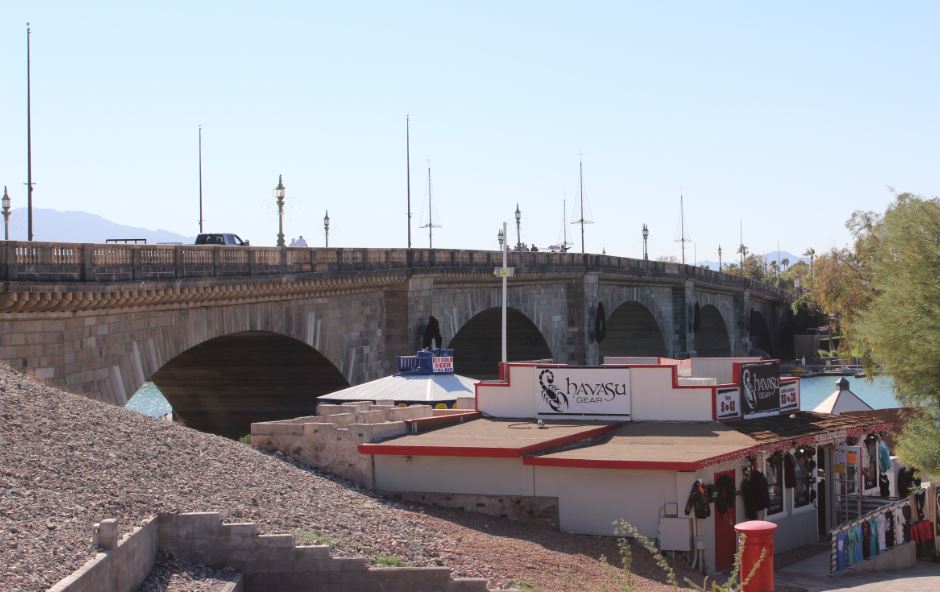 (Above) The original London Bridge moved from London, England to Lake Havasu City 50 years ago in 1968.  It has become a landmark for the city.

There you will be able to fly your favorite model airplane from the largest water runway you will ever find.  It is always a treat, light winds, bright sunshine and 70 to 80 degree temperatures. The 56 pilots that registered were in for an absolute perfect day of flying as Saturday dawned bright and sunny with the temperature running to about 70 degrees and almost no wind. All six flight lines had backup lines waiting to fly all day. 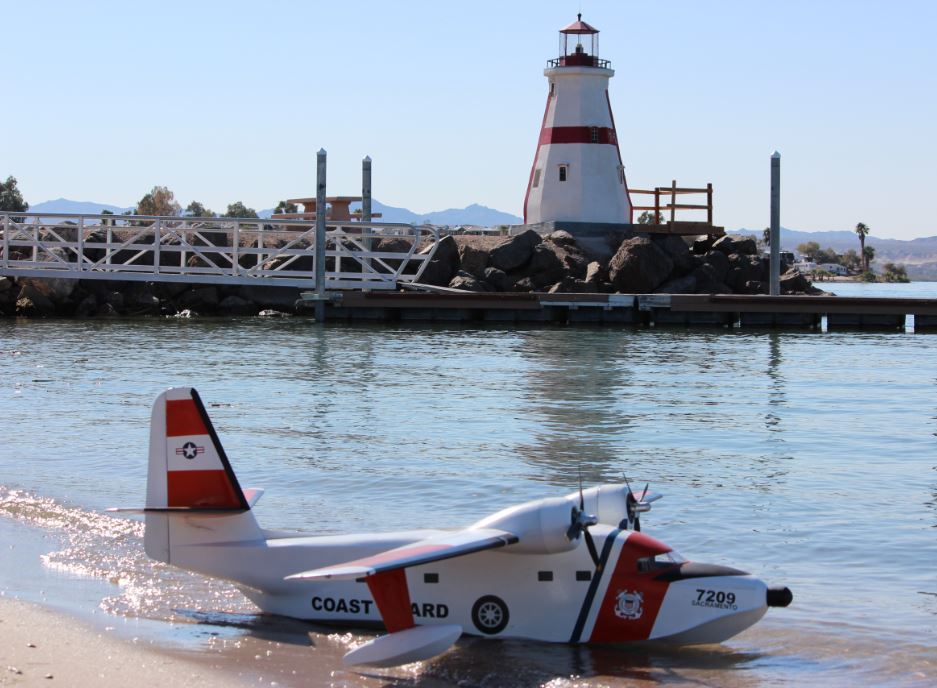 (Above) Monty Welch’s Park Scale Albatros in Coast Guard colors.  The model is 96” span and is only 10.5 lbs!  Electric powered and was built by his wife Lina Welch, truly a family project.

Every registered pilot received a T-shirt, commemorative event plaque and two tickets for the pilot’s raffle.  The site is Windsor beach State Park.  The parking lot serves as the camp ground for many of the pilots that arrive in RVs.  The Desert Hawks provide trailer shuttle service to carry all pilots, planes and support equipment from the RV compound to the beach.  They also man two recovery boats all day long on the lake for those few unfortunate incidents or dead stick landings away from the shore.  At the end of the day, they return everyone to the compound, what more could you ask for? 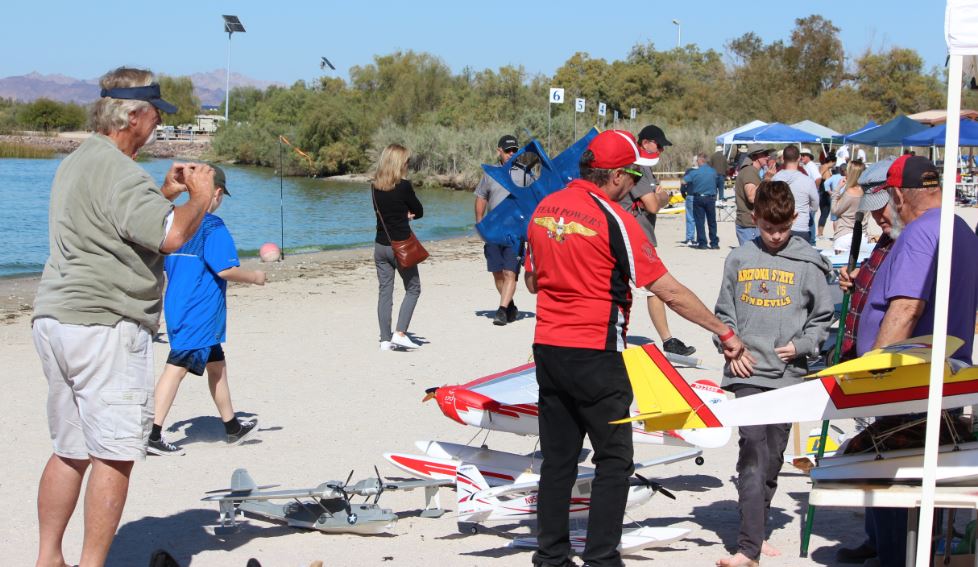 (Above) The beach was full on Saturday.  Everyone having a great time.

At night there is night flying in the grass area of the park.  In addition, there are always great scents coming from the BBQ dinners in the RV compound.  There are always groups gathering to tell stories from the past and sharing modeling ideas.  For those interested, there is a Casino shuttle that runs until late at night to take the people feeling really lucky, from the base of the London Bridge across the lake to a Casino on the California side of the lake. 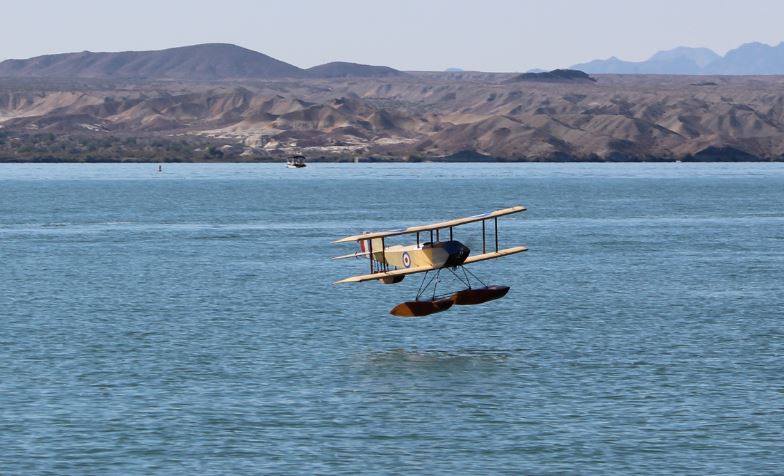 (Above) A Sopwith Schneider Baby built by Marjoe Bunney comes in for a landing.  108-inch span, 46lbs. and Quadra Q-100 for power.

The variety of aircraft is always great.  Most common are Cubs and Beavers.  There are also many flying boats, either scale like the Grumman Albatross or one of the many different sport scale designs.  There was even a Schneider Cup racer that made one flight. 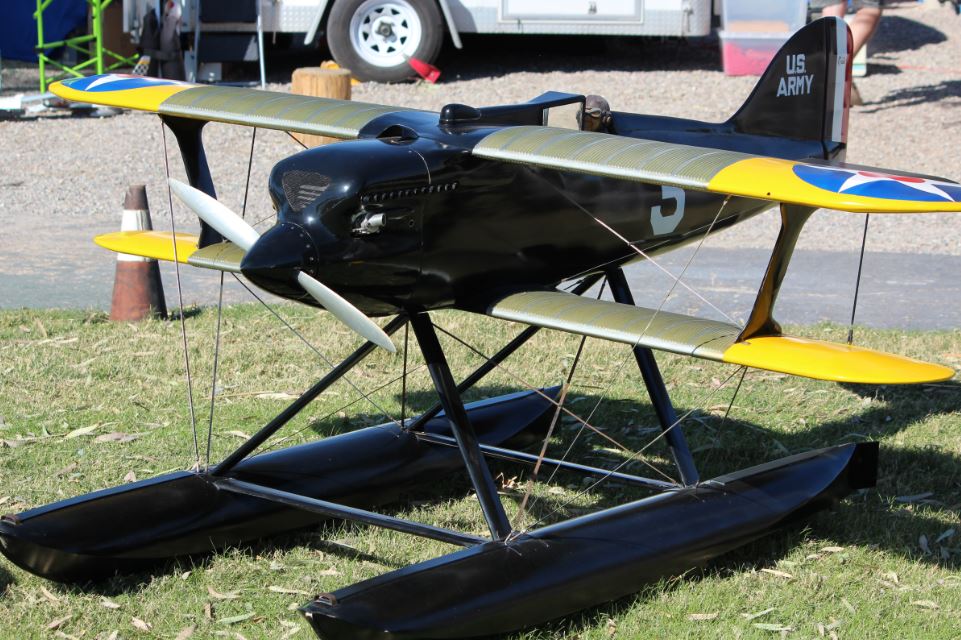 (Above) One of the Schneider cup racers. This one is a Curtis R3C-2. The full-scale was flown by Jimmy Doolittle in the 1925 Schneider cup race. This model was built by the team of Larry Tate, Jerry Lieche, John Hanks and Bob Martin in 1988.  88-inch wingspan, 39 lbs. and powered by a Sachs 4.2ci engine.

The Desert Hawks have been supporters of the historic Schneider Cup racers, and have held four Schneider Cup re-enactment races in the past.  2019 marks the 30th anniversary of the first of these events and a 30th reunion is planned.  The hope is to have enough aircraft to allow several race heats throughout the weekend. 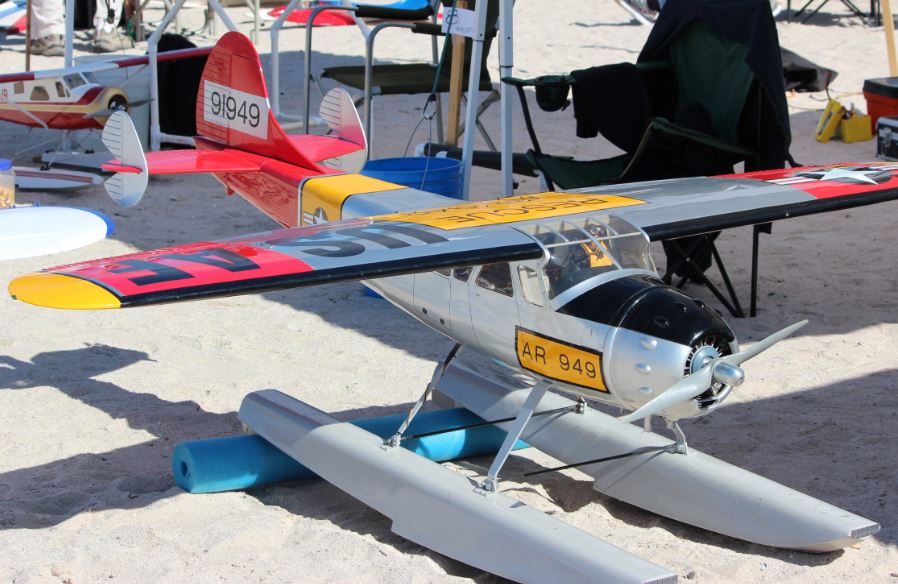 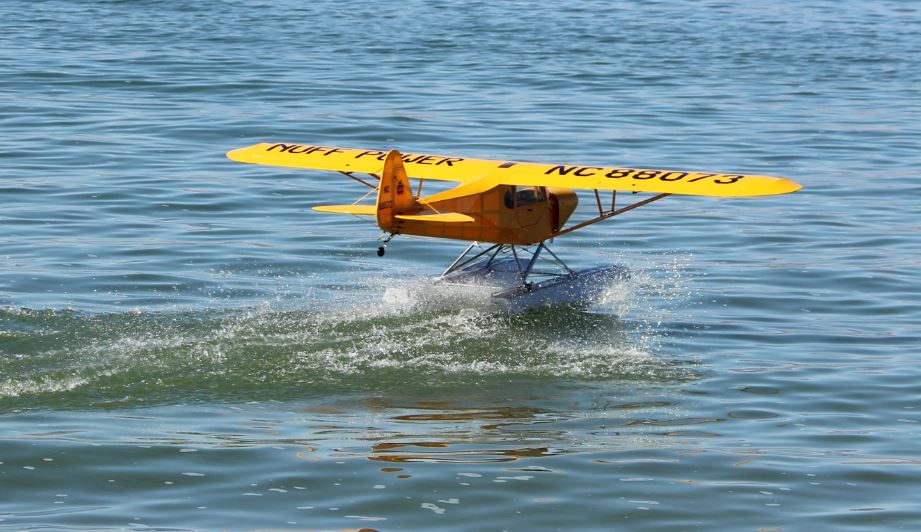 As November 2019 approaches and you are feeling the early effects of winter, gather up your favorite aircraft, add a set of floats and travel to Lake Havasu City for the 34th edition of the London Bridge Seaplane Classic.  You will not be disappointed while being treated to great hospitality and the world of float flying.  What better way to spend a weekend combining the beach, flying and friends.

For more information on the club and event: CLICK HERE 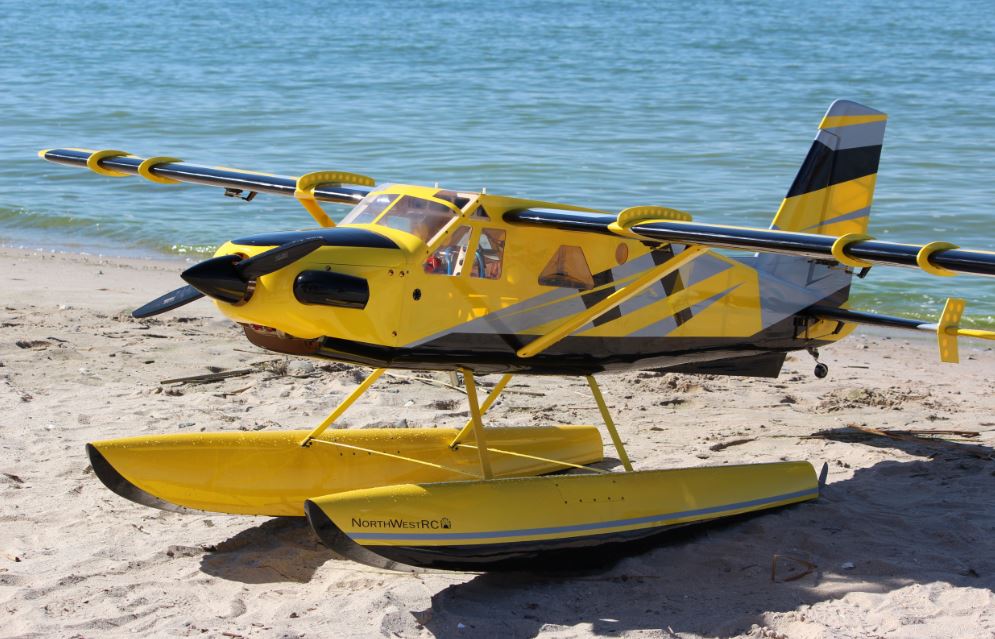 (Above) Tim Hanstine of Northwest RC put on a great show with his DA 70 powered 120-inch Turbo Bushmaster. 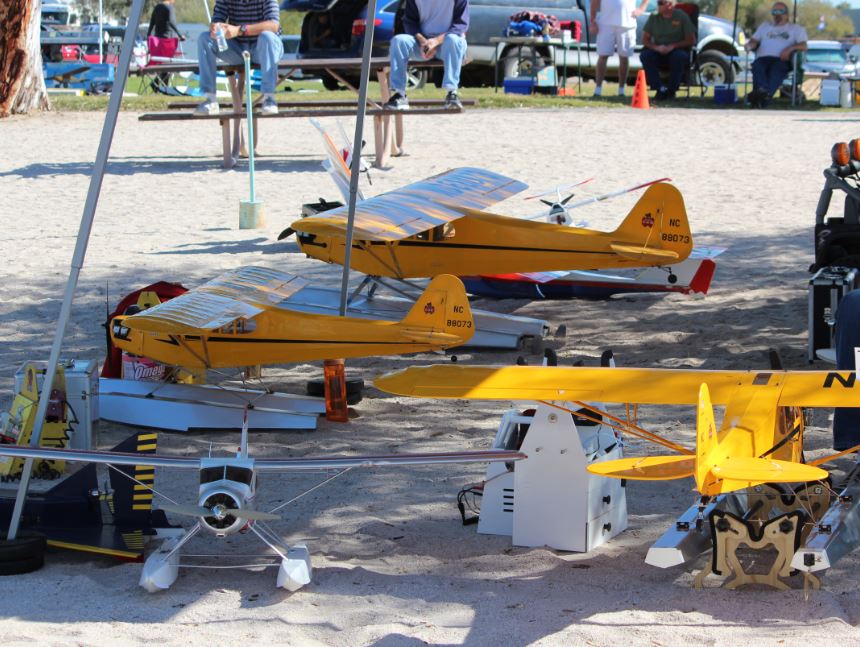 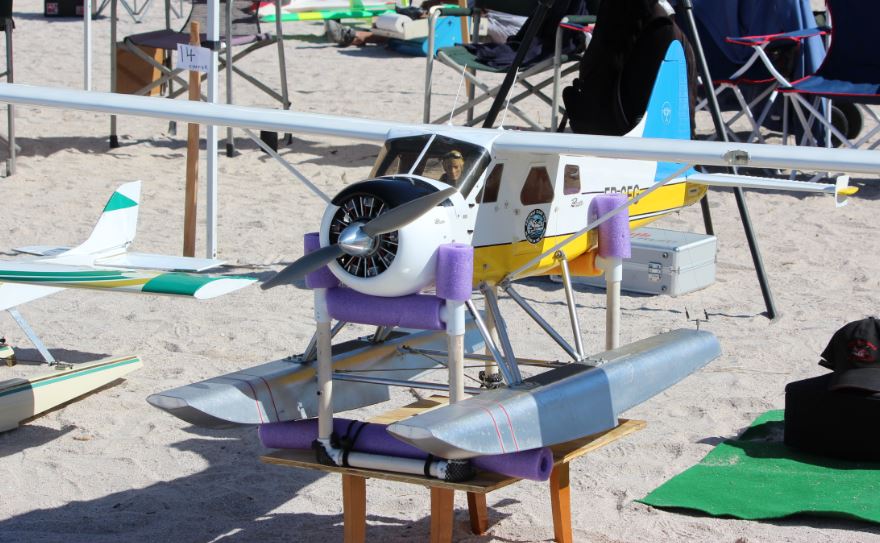 (Above) Carlos Rangel of Tucson brought his Top Model Beaver.  Electric power using an E-Flite 150 and 10 cell Li Po battery back.  1/5 Scale model has a 90” wingspan.

If you like flying off of the wet stuff, this is a great event to attend. For more details on the Schneider cup history go to Schneidercup.com.