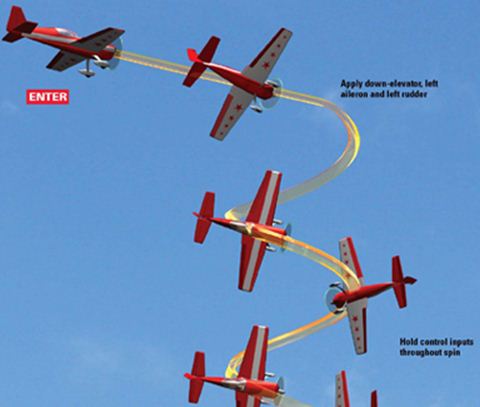 The knife-edge spin is one of the most impressive extreme aerobatic maneuvers. It’s very demanding for the pilot and the airframe. First, I’ll describe the maneuver.

In traditional knife-edge, the aircraft is rolled approximately 90 degrees from upright level flight. Then altitude is sustained by using ìtopî rudder. When the maneuver is complete, the pilot will roll the model 90 degrees to return to upright level flight. Compared with a traditional knife-edge, in a knife-edge spin, the model’s attitude remains parallel with the horizon. To do the knife-edge spin, you have to gain a lot of altitude. Then, when you are ready to begin, bring your throttle back to about 50-percent power and apply full down-elevator and right or left aileron and rudder. When the model begins to tumble, it will change its attitude and begin a tumbling descent. This is the knife-edge spin. When you are ready to exit the maneuver, simply neutralize all stick inputs, and the model will quickly come out of the spin. Then pull up-elevator ever so gently to an upright and level flight exit.

During a knife-edge spin, your model will quickly lose a lot of altitude. This is because during this maneuver, lift comes from your fuselage side area, which doesn’t even compare with the lift produced by your wing area. Make sure you gain a lot of altitude before you begin this maneuver. 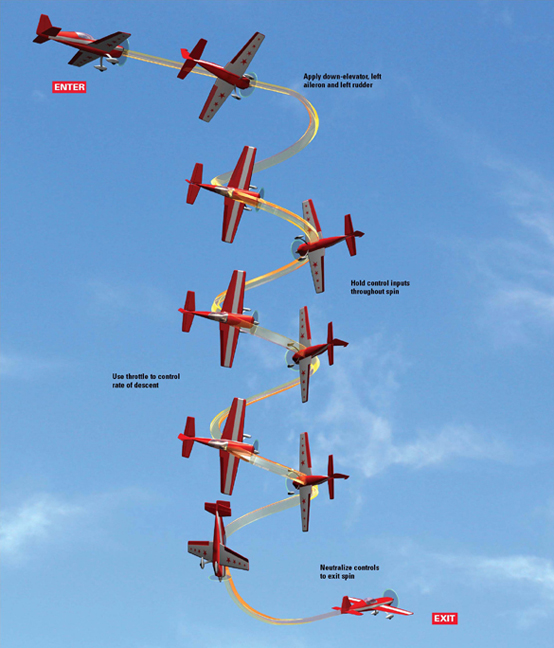 When you start to do a maneuver that stresses the airframe, e.g., the knife-edge spin, you must make sure that you have a rigid airframe with the best possible linkage setup. Also make sure that your model has more than enough servo power.

Now let’s talk about you, the pilot. Most pilots roll more comfortably in one direction than the other. If you prefer to roll right, it’s better for you to spin to the right during a knife-edge spin and vice versa. Once you’re familiar with the maneuver, you’ll be able to spin in either direction.

Begin at a high altitude and with your model parallel to the runway. In the language of aerobatics, we say our position relative to the runway is our “center.”  When the model approaches the ìcenterî of the aerobatic box, you will begin the maneuver.

You’ve finished the maneuver! Sit back, relax and enjoy the rest of your flight!

Give yourself time to learn this maneuver. If you have difficulties, do not blame yourself; instead, check your airframe and tweak your endpoint adjustments as described in Step 2 so that your model will fly the knife-edge spin.