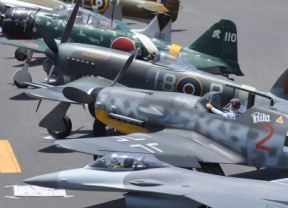 It’s time for the Pomona Valley Model Airplane Club’s annual scale event at their Chino, California club field! This weekend the club expects pilots from SoCal and neighboring states to gather for a weekend of scale fun. Last year, more than 160 scale models flew over the weekend!

Last year our 4th Annual Scale Squadron Fly-In was held, once again, at the outstanding Pomona Valley Model Airplane Club field in Chino, CA the weekend of June 5-6, 2010.   The Fly-In became a memorial event to honor one of the last founding fathers, Jerry Oretgo.  Eighty-seven pilots from 3 states graced us with their attendance with over 160 scale models to be flown for the weekend.

At noon a tank group called the Southwest Armor Group of Southern California demonstrated their tanks capability with prop buildings and vehicles they had setup on the other side of the flying field.  At the same time, an exciting gaggle of WWII fly bys was taking place.  The crowd got excited with the airplanes in the air and the tanks performance on the ground.  After the gaggle, pilots were asked to bring their models to the middle of the runway for viewing.  The public was invited for a close up meet and greet with the contestants and to vote for their favorite model airplane.  After all the excitement of the noon show the pilots went back to flying their scale models until dusk.  Later that evening the club hosted a BBQ for the pilots and their family at a Chino airport hangar that is owned by 3 club members.  The hangar is home to a full scale P-51, a T-6, and an N3N primary trainer.  The excitement was even further heightened when they fired up the P-51 for us all to hear.

The weekend concluded with 15 awards being handed out, everything from “Best Military” to “People Choice” awards.  The panicle was the presentation of the Scale Squadron Commander’s award.  The particular award is given to the pilot that exemplifies the spirit of the scale event.  In addition to the plaque an FW 190 Focke Wolf kit, once kitted by the honoree Jerry Ortego, was presented.  The lucky recipient was a Squadron club member Tim Cardin who wasted no time in building and finishing the kit in Jerry Ortego’s competition colors.  Phyllis Ortego, Jerry’s wife, was present at the award presentation.

The 2011 event will be held in the same location on June 4th and 5th.  To accommodate more flyers, this year, the club has doubled up the pit area.  This will eliminate the need for pilots to pit so far from the flying gate.  We will once again be hosting a Saturday evening banquet in the Chino Airport hangar.  This year’s banquet will also host an auction of various new large scales model airplanes and radios.  This annual event is fast becoming the talk of the west coast, so make your plans now to attend, come out and see some great flying scale models.