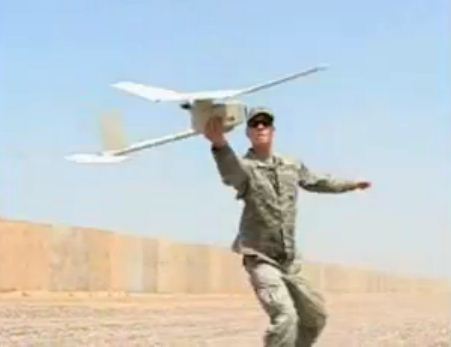 If you have stock in AeroVironment, you’ll be happy to hear this news: the company  just announced that it received $16.4 million in funding from the U.S. Army for a projected $65.8 million contract to include RQ-11B Raven systems, new miniature gimballed payloads and spare parts packages. The  Raven is a 4.2-pound, backpackable, hand-launched sensor platform that provides day and night, real-time video imagery wirelessly to a portable ground control station for “over the hill” and “around the corner” reconnaissance, surveillance and target acquisition in support of tactical units. U.S. armed forces use Raven systems extensively for missions such as base security, route reconnaissance, mission planning and force protection. Each Raven system typically consists of three aircraft, two ground control stations and spares.

Weighing 450 grams, the rugged, multi-axis Mantis i23 payload for the Raven system houses an electro-optical and infrared thermal video sensor in addition to a laser illuminator.  The single payload replaces two separate sensor payloads on the Raven air vehicle, delivering daytime and nighttime capabilities from a single package.

“The Army is quickly and easily integrating the new miniature gimbaled payload into the Raven systems because of its reliability in providing superior imagery and tracking capability in harsh environments,” said Roy Minson, AeroVironment senior vice president and general manager, Unmanned Aircraft Systems.  “We anticipate our new payload, an example of our focus on continuous and cost-effective capability enhancement for the warfighter, will become a standard component of currently fielded and future Raven systems.”

Check out the video to see a U.S. mortarman talk about how he learned to fly a Raven in Iraq.