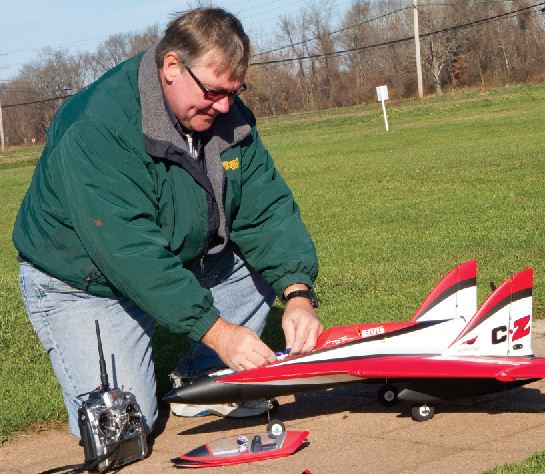 We just got the new Scimitar in the office and are ready to kick the tires and light the fire! Here’s a sneak peek of the Pilot Report coming soon to Electric Flight Magazine. How did it perform? You’ll have to wait and see! 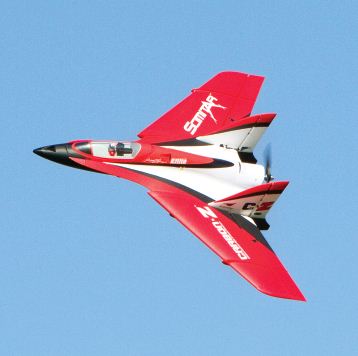 Several years ago, I was fortunate enough to see Quique Somenzini compete at the Tournament of Champions in Las Vegas and watched in total amazement as he put his model through outrageous maneuvers.  I not only admired his skill as an RC pilot but also the cordial manner with which he spoke with his many fans, including yours truly. So, when I was asked by the editors at MAN if I would like to review Quique’s latest design, I naturally jumped at the chance. They told me it was E-flite’s Carbon-Z Scimitar BNF and I said, “Scimitar?”  Well, according to my Random House Dictionary, Scimitar(pronounced simitar) is a curved, single-edged sword of Oriental origin. The Carbon-Z Scimitar, however, turns out to be a red hot fantasy-scale, twin- rudder  delta-wing electric with a revolutionary single-axis, vectored-thrust propeller system that gives the Scimitar an unheard of level of maneuverability. 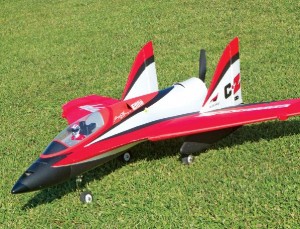 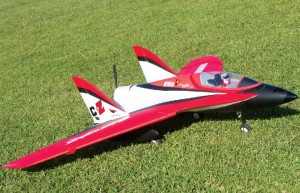 One of the most unique features  of the Carbon-Z Scimitar is the technology incorporated into its airframe; namely, Carbon-Z. This patent pending technology combines a blend of carbon, plywood and Z-foam and an entirely new design philosophy in which the wings, for example, are no longer made of solid foam but are molded in a built-up format with ribs and include embedded plywood spars  and carbon rods. This gives a lightweight structure with rigidity and strength previously unattainable  with solid foam.

The BNF version of the Scimitar comes with everything you need to get airborne except for the transmitter. The “kit” includes six high-speed digital servos, a powerful Power 32 brushless motor, a 60 amp ESC, a four-cell, 3200mAh Li-Po battery and a 3-4 cell variable rate DC Li-PO balancing fast charger. Fixed landing  gear are included but the plane is set up to accept optional E-flite electric retracts. High-quality socket-head hardware is used throughout and the necessary Allen wrenches are included. This plane goes together without glue of any kind and can be ready to fly in one evening. All of the included servo extensions are labeled and plugged into the installed Specktrum AR600 receiver. An extension is even provided for the bind plug so you don’t have to get to the receiver to bind it to your transmitter.  If you install the optional electric retracts, which I highly recommend,  you will find the wiring harness already installed with the connectors brought out to convenient locations. Obviously, E-flite has thought of just about everything. 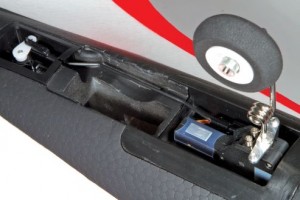 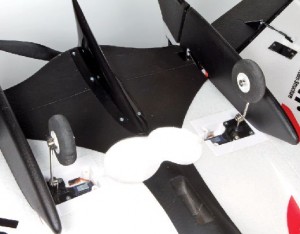 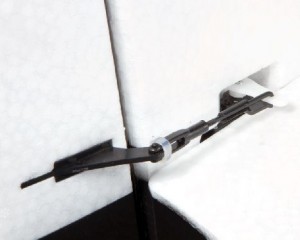 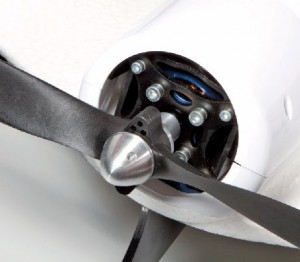 The single-axis vectored- thrust (VT) propeller system is a well engineered unit in itself consisting of the brushless motor housed in a can which, in turn,  is mounted in a housing with two ball bearing mounts. The specially designed metal gear mini servo that drives the VT unit is installed immediately behind the VT unit. E-flite recommends that the VT unit not be used until the pilot gets used to the way the Scimitar flies so they have made provisions to let you lock the unit in place after the servo is unplugged from the receiver. 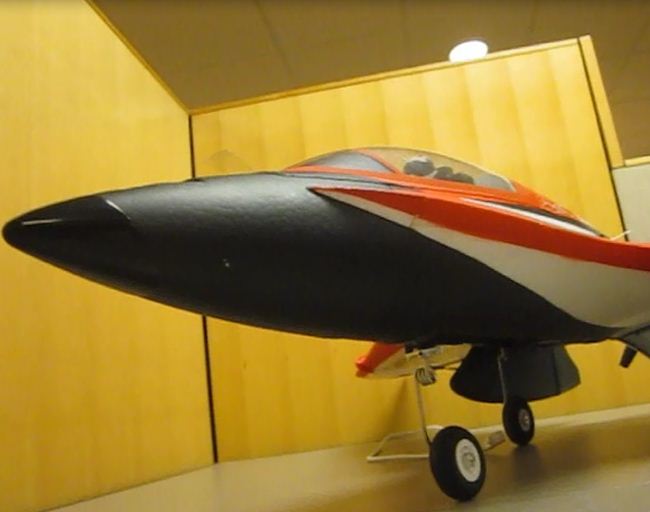 Because of the Vector Thrust on the Scimitar, the propeller must be precisely balanced to prevent excess vibration and damage to the VT servo. The propeller included with the Scimitar has “ears” located on the hub to make it easy to obtain a precise balance and detailed instructions are included to assist the modeler with that task. Fortunately, I was lucky enough to have received a prop that did not need any additional balancing. 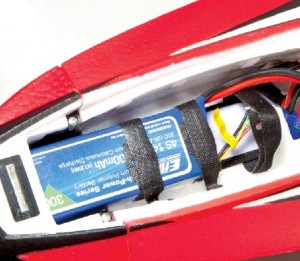 Considering the fact that the Scimitar is a BNF model, I was somewhat surprised when I saw the 95-page instruction manual but then I realized that it is written in four languages. The manual not only covers assembly but also includes information on battery warnings and charging, transmitter and receiver binding, transmitter set up, maintenance, a pre-flight check list and flying tips. All sections are adequate for an intermediate builder/flyer but, personally, I would have liked more info in the flying tip section.

The Scimitar comes in a distinctive red white and black color scheme for superior visibility and the design includes effective front and side cooling inlets with internal venting. The battery gets installed in the forward section of the fuse and is readily accessible through the magnetic canopy hatch. The receiver and ESC are accessible under a second hatch which is held in place with a single screw in the front and tabs in the rear. The VT unit can be accessed by simply removing four screws that hold the motor hatch in place.

The “no glue” assembly consists of installing two carbon rods in the fuselage the sliding on the vertical fins and wing panels. Each fin is held in place with a single screw and each wing panel uses two screws. The only place I had difficulty was getting one of the wing screws to line up but that problem was solved by making sure the wing was pressed tightly against the fin.

A DSM2/DSMX six-channel (or better) computerized transmitter with adjustable dual rates, expo, delta/elevon mixing and programmable mixing for vector thrust is recommended for flying the Scimitar. This model requires differential which is important for good axial rolls and a lot of expo for both high and low rates. Also, the VT servo has to be mixed with the rudder control to get the proper amount of yaw control. I used a JR9503 DSMX transmitter and spent a fair amount of time programming it for the various mixes recommended in the instructions.

The Carbon-Z Scimitar is not inexpensive and definitely not for beginners. It is a very unique airplane with awesome flight characteristics that will give the experienced pilot many adrenaline pumping moments. Its single-axis vectored thrust propeller system combined with its twin rudders raises its performance to previously unheard of levels. This is a very well engineered design that goes together quickly and looks great on the ground or in the air. While doing a little research for this project, I came across a comment on one of the many internet RC forums that stated that this was “a Stryker on  wheels”. Well, I can honestly tell you that that couldn’t be further from the truth. The Scimitar is in a class by itself!