Here we continue my Cheyenne scale heli project, introduced here.  The construction of the complex tail unit was covered here.

While I had good reasons to choose the Blade 600 X for my mechanics, there was one feature of this particular heli that cost me some extra work. You see, the 600 X has a 169-tooth 1.0 Modulus main gear. This gives the 600 X outstanding power transfer, but it also results in a gear nearly 5-3/8″ in diameter – too large for the Cheyenne’s slender fuselage. I had this same issue with the 450 version, and there I substituted a 132T main gear from a Shogun 400 for the T-rex 450’s stock 150T gear. This time I found the 170T 0.8 Modulus main gear from a T-Rex 600 was a drop-in replacement on the 600 X gear hub. Great! But there were a couple of hidden issues: For the motor pinion to mate with the smaller main gear I would have to move the motor rearward.  Well that’s fine, but what I found was that the center cyclic servo’s output arm was just 1/8″ from the motor!  As if that wasn’t enough, the anti-rotation bracket was also in the way!

I considered and discarded several solutions to this problem.  Then I came up with a simple idea that looked like  a winner:  Like nearly all helis with direct-to-swash cyclic servos, the 600 X has symmetrical frames.  So there are mounts for four cyclic servos even though only three are needed.  What I decided to do was to fabricate a goalpost-shaped yoke that would allow two servos to work together.  Not only would this get the servo output arm out of the way of the motor, but because this yoke would prevent the swashplate from rotating, it would make the ugly anti-rotation bracket unnecessary!

The key to making this work was my selection of Hitec HS-7954SH digital servos for cyclic.  Because these servos are programmable, I could use my Hitec HPP-21 Plus servo programmer to program the 2nd servo for reverse rotation.  The assembled yoke works perfectly, and everything worked well with the Spektrum-MicroBeast AR7200BX receiver/flybarless unit.

With the main powertrain and cyclic servos completed and the controls thoroughly tested, it’s time to move on to the extended tail. 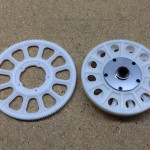 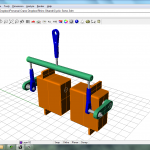 To allow moving the motor aft and eliminate the anti-rotation bracket, I designed this yoke to work with a pair of cyclic servos. The cyclic elevator yoke was machined from 1/4″ 6061 aluminum rod. Note the programmable Hitec digital servos which make this practical.