This installment continues construction of my 700-size AH-56 Cheyenne.  The project begins here.

Since the Cheyenne’s tail rotor is mounted at the end of a long extension shaft, I needed to fabricate a control linkage with a bellcrank,.  I’ve just gotten into having parts 3D printed by Shapeways.com, and this was a perfect application for their laser-sintered nylon process (this will be featured in the June issue of Model Airplane News).

I used Rhino 3D to design the pitch control arm, bellcrank and bellcrank mount, then I saved the drawings as stereolithography (STL) files and uploaded them to the Shapeways website.  Within a couple of weeks my parts arrived, and I could complete the pitch control assembly. 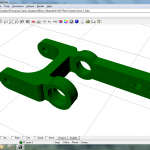 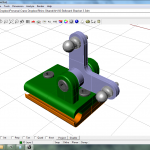 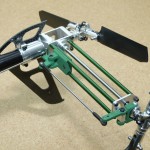 The 3D parts worked out perfectly, and in just a few minutes I had them installed on the tail unit.  The mechanics are now nearly ready for flight testing.  All that remains is installing the pusher prop pitch control rod and final ground checks.  I can’t wait!

Update:  The mechanics are now flying, and other than some vibration in the pusher prop, everything is working according to plan.  It’s now time to set the mechanics aside and move on to the process of making a mold for the fiberglass body.