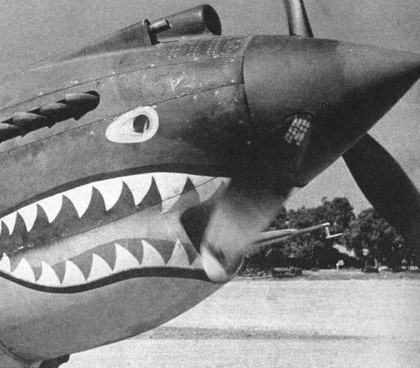 AMERICAN VOLUNTEER GROUP PILOT TAKES HIS P-40 TOMAHAWK OFF THE FIELD NORTH OF RANGOON.   NOTICE TWO GUNS ON EDGE OF EACH WING, ONE EACH SIDE OF COWLING.
Photographs for LIFE by George Rodger

One shining hope has emerged from three catastrophic months of war. That is the American Volunteer Group of fighter pilots, the so-called “Flying Tigers” of Burma and southeast China who paint the jaws of a shark on their Curtiss P-40’s (above). Outnumbered often ten to one, they have so far shot down about 300 Jap planes, killed perhaps 800 Jap airmen. They have violently wrenched from the Jap Air Force control of the skies over Burma and southeast China. They have conclusively proved what was once only a Yankee belief: that one American flier is equal to two or three Japs. “Give me,” said U.S. Lieutenant General Brett in Australia last week, “100 fighters to 200 Japs and I’ll lick them every time. I am not disparaging the Japs. They are good fighters.” On the following pages LIFE presents the first full-length portrait of the Flying Tigers in action, taken by LIFE Photographer George Rodger before Jap ground forces seized the A.V.G. base at Rangoon.

The hundred or so young men of then Flying Tigers have several tremendous assets: 1) they have had up to six years of military flying and they have and instinctive feel for what their machines will do; 2) they have been blooded in the air and 3) they are always looking for a fight. The result was bound to be something extremely painful to anybody who ran into them. On their first meeting, they actually lost four planes to the Japs’ six. On the second historic meeting, on Christmas Day, they mowed down 20 out of 78 Japs with a loss of zero. The holocaust was on.
The American Volunteer Group was recruited from U.S. Army, Navy and Marine fliers a year ago, under hush-hush circumstances to avoid offending the Japs. Its job was to help China fight. Pay was $600 a month with a $500 bonus for every Jap plane shot down. The men, who had been promised no loss of rank in the U.S. Armed Forces, began arriving in the Far East last summer, registered as tourists, acrobats, artists. They were trained and organized by China’s crack American Air Chief, Colonel Claire Chennault. When war broke out Dec. 7, they were just about set.

These great American air fighters do not talk ideologies, though they are all educated men. They do not discuss why they are fighting. They are having a good time and a highly dangerous one, but Dave Hill wants to be a rancher, Layher wants to practice law and Ed Rector wants to grow tobacco in the hills. In effect, the Japs interfere with those programs and must be eliminated.
On this page you see how the A.V.G. services and repairs its planes at an advanced airfield in Burma. Their American ingenuity at patching up their battered planes with hand tools and old material is one reason for their continued practical success over the Japs. On the alert every daylight hour, these pilots make excellent fighting teams, every man pretty much his own master, for every man is squadron-leader material of the highest type. Perhaps half a dozen have lost their lives in combat. The factual story of their skill, courage and fighting spirit has swept Free China with the knowledge of what America’s joining the war means. But their highest compliment came in a Tokyo broadcast that complained that the A.V.G. was not using orthodox tactics.

Results in the A.V.G. are measured in terms of smashed Jap planes and dead Jap crews. Some A.V.G. results are shown on these pages. The A.V.G. is usually fighting defensive air actions – i.e., breaking up Jap bomber formations protected by Jap fighters. These Jap fighters are not quite as fast as the American Tomahawks but the climb and maneuver better. Oddly enough, Jap bombers are faster than fighters and the only way the Americans can get them is to gain altitude and gather extra speed diving on them.
The unoriginal Japs are, for the most part, flying American planes. Their bombers are home-made copies of ours, with modifications which are not always improvements. Their engines are duplicates of U.S. designs made in Japan under U.S. patent license. A special Jap touch to aviation is that of officers fly and die with their samurai swords. Chiang Kai-shek, A.V.G.’s boss, told these Americans: “Each of you has proved a match for 30 or more of the enemy. I hope to celebrate with you in Tokyo.”

TOP OF PAGE    PRINT THIS PAGE    ABOUT THIS PAGE