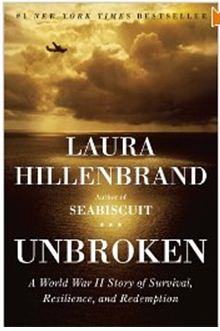 Unbroken: A WW II Story of Survival, Resilience and Redemption, by Laura Hillenbrand

There’s not much better than being in the middle of a great book: it’s a treat meant to be savored but one that I sometimes end up gobbling in just a few sessions. At the moment, I’m just a few chapters into Unbroken, by Laura Hillenbrand, and the hero, a bombardier on a B-24, is in the Pacific at the start of WW II.

The writing is so vivid that I can imagine flying in that huge fuselage, walking on the thin rails from the cockpit to the tail, and what it was like to sit in the cramped turrets for hours on end. Wow. And I never realized that the new aircraft technology being used, the inexperience of the young pilots and other factors caused more U.S. airmen to be killed in training accidents at home and abroad than in actual combat.

I’m looking forward to continuing my B-24 adventure this weekend, but if you were looking for a good non-fiction read, I highly recommend this one