If you have been around this hobby for a long time you’ve seen many changes in recent years.  There are still some extreme craftsmen like Graeme Mears making master pieces in their workshops, many of us have limited time and look forward to getting out and flying.  It’s great to have that custom build, but with the ease of off the shelf products and availability of time, taking on a huge project isn’t a luxury for all.   Maybe the answer is to customize or personalize your favourite ARF.

Many of the ARFs on the market are good quality from long time recognized companies.  One of the most popular full size homebuilt aircraft is the RV-4.  Great Planes has a small kit version and a ¼ scale ARF.  Recently I purchased the ARF figuring it would make a nice everyday flyer.  However the colour scheme as shown on the box wasn’t exactly ‘my style’.  The aircraft is mostly white with some trim grey, metallic red & black, this would make a great base to begin.

So where to begin? I didn’t start assembly or construction I started surfing the net looking for images of RV aircraft, not just the RV-4 several others too.  After finding a scheme for the fuse I made some rough sketches of how to use some of the original trim.  Finding a scheme for the wing was a little more challenging.  Flipping through past issues of MAN magazines a photo of Sam Filippelli’s IMAC Extra 300 was the solution.  A quick google search and I had a 3-view image to draw my new planned scheme.

Once the scheme was sketched it was time to start preparing the ARF.  One of the good points in choosing a GP ARF is that it’s covered with Top-Flite Monokote, making it easy to match colours.  I had white, black, and grey a quick trip to the LHS for a roll of metallic red, using these this simplified the process of matching the cowl.

The first step in the transformation was to remove the covering  from the horizontal and verticle  stabs.  A sharp x-acto blade makes this a quick job, take care not to damage the structure, if you do a little thin CA will fix it.  As with any heat shrink covering, follow the manufactures suggested iron temperature setting.  If the iron is too hot it’ll ruin your hard work, if it does happen, start over with a new piece and the iron on a lower setting (let it cool down first).  The tail feathers were then re-covered using the metallic red.  Take care not to over shrink the covering causing warps.  Cover both sides of the structure before the final shrink to make everything tight, this does help prevent warping the surfaces.

Next I made the changes to the fuse.  First remove the grey and white from the area that will be covered in red and black.  Then cover with the aft part of fuse in monokote matching your design.  When using heat shrink covering on a fully sheeted surface I start in the middle working towards the edges to minimize trapped bubbles.  If you do get a bubble, use a sewing needle (‘borrowed’ from the missus) to pop the bubble then iron down.

Removing the trim from the wing was a little challenging, the grey and black easily peeled off, a little heat from iron helps.  The metallic red was difficult to remove, a combination of heat, alcohol & duct tape, yes duct tape.  If you remove covering the coloured adhesive sometimes is left behind apply duct tape to the area rub it down well then quickly remove duct tape as you would a bandaid, this works for removing one layer from another layer of covering.  If there are still a few bits left they can be cleaned off using a little rubbing alcohol.  Once the trim was removed apply the new monokote trim to the wing matching the design.

The next steps are easy, assemble the ARF as per the instruction manual.  I did deviate from the manual in one area.  I surface mounted the servos for rudder and elevator under the horizontal stab.  The same method Gerry Yarrish used on his Florio Flyer 60.  I’ve included a few photos of the process.  Hopefully this may inspire you to customize your own ARF.  Have fun. 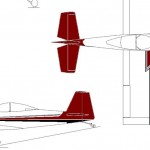 Before starting project have a design. 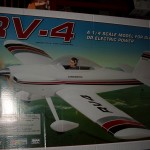 A nice aircraft, I like my version better tho 😉 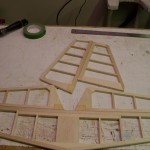 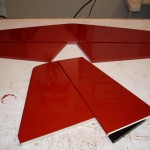 A new colour for the horizontal & vertical stabs 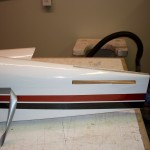 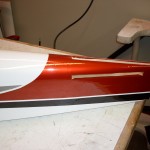 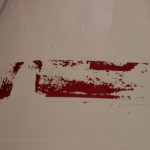 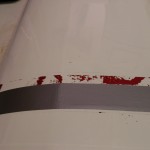 Duct tape is for more than Mythbusters 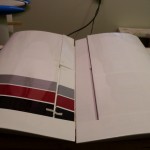 Trim removed from one wing, one more to go. 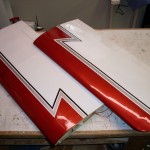 A little zigzag for a new look. 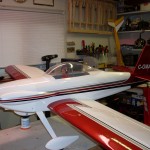 A new look for a new ARF