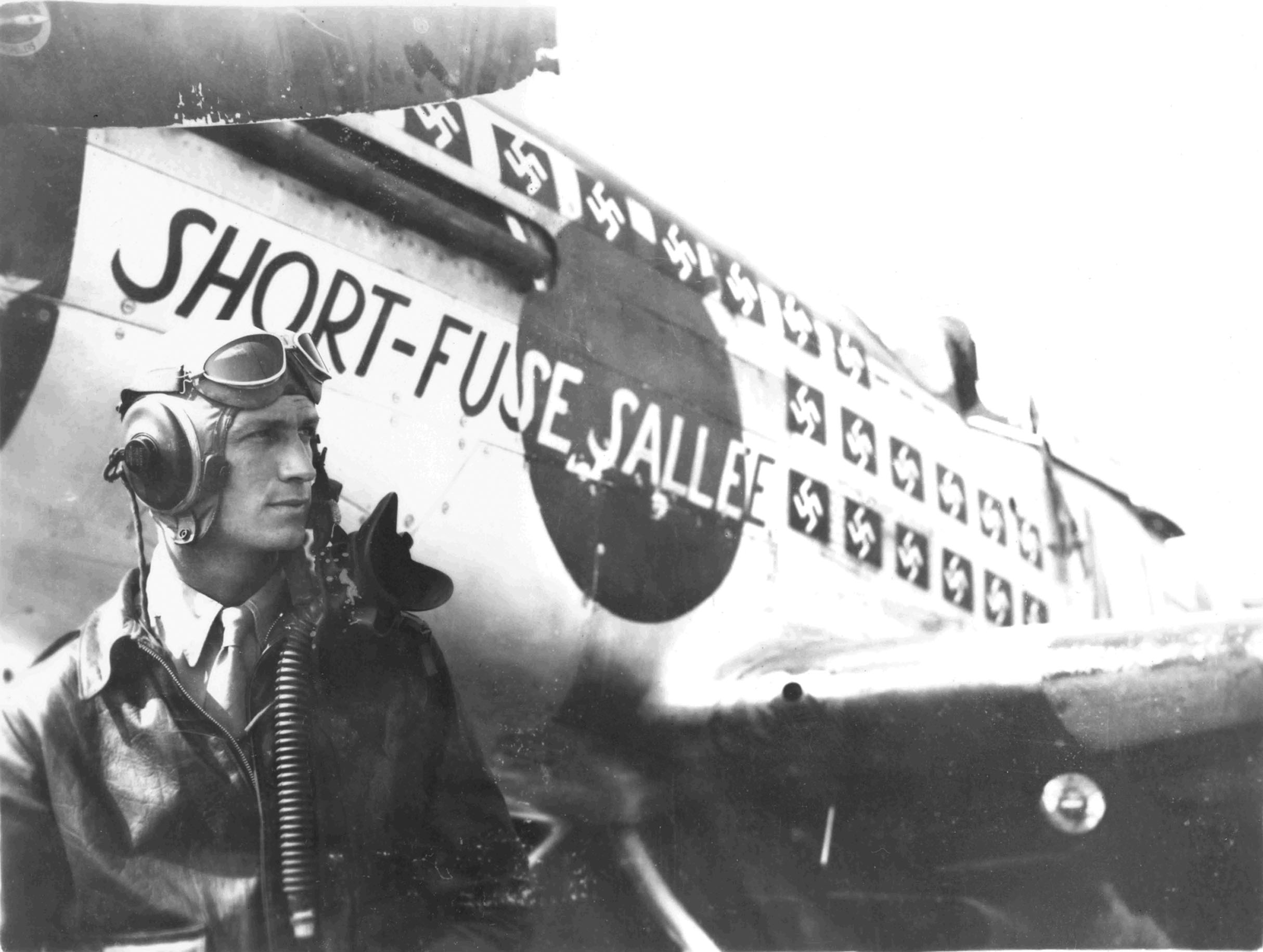 No single military battle so changed the course of a war as did the Normandy invasion on D-Day. So many were lost this day and the price of freedom was paid for with their blood. We should never forget their sacrifice. Check out this story from our sister publication Flight Journal, “A Pilot’s View of D-Day”

Since the 25th of May, the group had been informed that it was on a six-hour alert status, and had been assigned two officers from General Patton’s Third Army to stay with us and set up liaison procedures. Our flying hadn’t changed much except that more dive-bombing, fighter sweeps, and strafing missions were being thrown in with our normal escort duties.

“It didn’t take much brain power to know that the invasion of the Continent was imminent. The clincher came when we discovered a small detail of cameramen among us who had been assigned to cover our first-day activities on D-Day.

“On the 3rd and 4th of June, a couple of short missions were run over France. Rumor and speculation ran high on the 5th and 6th as we awaited the event with bated breath, and when it was revealed that the first day’s operations had already been completed without our participation we felt very much let down. 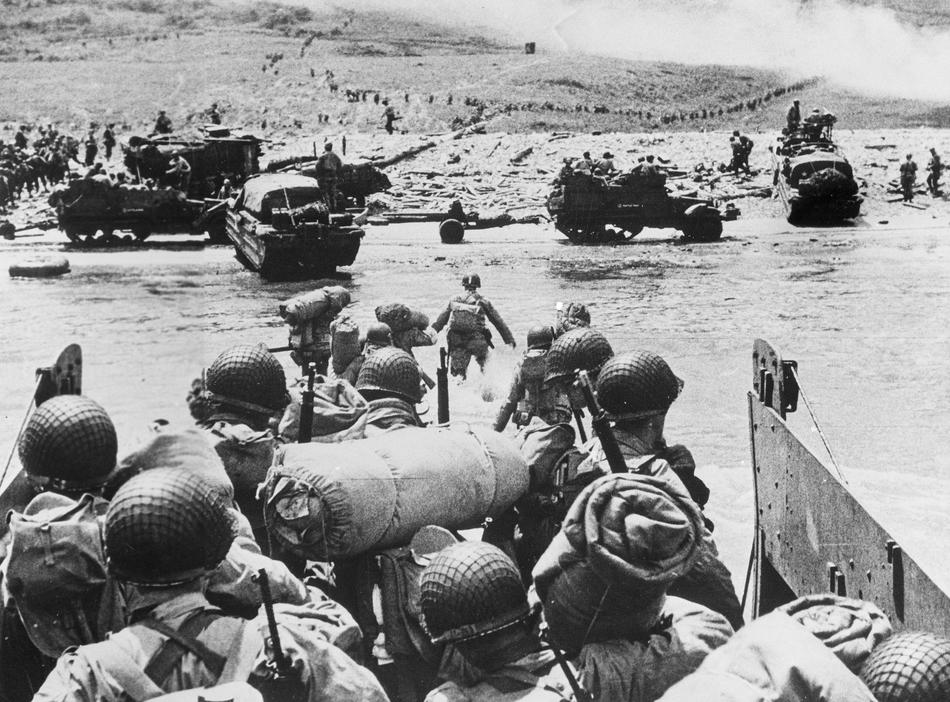 “Our fighting spirit came to peak pitch when after supper we were summoned to an immediate briefing. We found that we were to escort a C-47 and glider mission that night. We were to man our planes immediately, and to remain in them ready to take off upon signal from the tower. We were in our Mustangs at 9:00 that evening and at 10:00 we finally got the green take-off flare.

“Forming up in the settling dusk proved to be no problem, and when we rendezvoused with the southbound C-47s and gliders a half hour later over southern England, we could still see them fairly will in the twilight. My flight had a box of 16 C-47s and gliders to escort, and by the time we passed over the coastline and the Isle of Wight, it was black as the ace of spades. A cloud cover obscured even the faint starlight. The only way I could keep track of my charges was to concentrate on the blue flame of their exhausts. I couldn’t help wondering how I was supposed to tell the difference between our planes and theirs if the Germans attempted an interception. I left the problem to be solved when it arrived, and strained to stay with my C-47s and gliders without running them down in the process.

“When we got to mid-channel we were supposed to turn east and proceed off Cherbourg where the C-47s and gliders were to penetrate the enemy coast. Normally, escorting fighters move in advance of convoyed planes but tonight we were strictly followers, glued close to our charges. I divided my time between keeping one eye fixed on the ghostly C-47s, avoiding the deadly tow lines between them and the gliders, and watching for other wandering fighters that cut in front of us. Altogether a cliff-hanging mess!

“After 2 1/2 hours of heart-seizing flying, we crossed in over the coastline and the C-47s cut loose their gliders and dropped their paratroopers. I knew the mission had been completed only because without warning, the air burst into a maelstrom of crisscrossing tracer fire from the void below. I made a sweeping level turn to the right with my flight away from the drop zone, and beat it for the south coast of England.

“Yet now we were presented with an even-stickier problem. I knew our group alone had 48 churning Mustangs in the black void ahead, and all of them were converging for the pundit light at Christchurch for landing and refueling before returning to home base. The pundit light was a powerful hooded searchlight throwing its beam straight up, a marker for friendly aircraft. The beam is invisible until you are directly over it, and there would be terrifically heavy congestion tonight. God knows how many planes from other groups were being diverted to the same light, and it was with mounting apprehension that I approached the Bournemouth area to search the blackness for the pundit.

“There had already been six hair-raising near-collisions with other homebound flights. As we flew on, I debated chucking the whole mess to fly directly to our base, but I resolved to follow the flight plan even if it killed us all — as it could!

“It was a case of which was greater, your patience or your fear, and my patience was wearing exceedingly thin. After discovering the light by chance, I flew a wide, careful orbit, avoiding other fighters that loomed near us. Finding the Christchurch runway, I decided that the safest way to land my flight was to use a 1,000-foot overhead, 360-degree landing pattern in formation. It was not the usual system but it would keep the flight together, which was essential for our safety.

“With the flight in close formation, it would be easier for individual fighters to see us, and make them give way by force of numbers. The system worked perfectly. I set up in close formation 1,000 feet over the runway with wheels and flaps down and flew a wide descending circle with slow power reductions, finally skimming the approach end of the runway in perfect formation. We had it made! The pilots in my squadron were of the best. They could and did perform any maneuver I asked of them.”

The night’s missions had diminished the number of available fighters, and after his P-51s were serviced, Ninth Air Force asked Turner to provide an impromptu patrol over the landing beaches. He readily accepted and takes up the tale:

“Shortly before dawn I assembled my pilots and briefed them. The plan was to fly straight to the beachhead and provide cover from the mouth of the Seine to the Cherbourg Peninsula for one hour.

“The cloud cover had dropped and we were forced to fly at about 4,000 feet. Crossing the Channel, I saw the debris of C-47s floating forlornly on the oily water, a grim reminder of last night’s mission. Arriving over the Bay of the Seine we could see ships, boats and LSTs spread out for miles, extending out of sight into the Channel. At that low altitude, they could clobber us if they fired upon us. None of the warships fired, but we drew a few shots from trigger-happy gunners on smaller craft.

“As we flew back and forth patrolling the beach, I could see a steady movement of personnel through the beaches to the inland woods. All looked orderly and peaceful form 4,000 feet but now and then a half-sunken ship, a burning vehicle or some unidentifiable wreckage would be visible. I noticed the wreck of a C-47 and P-47.

“After our first sweep of the area, we started looking for the German fighters we expected to find trying to hit the invasion forces, but except for ourselves, the sky was empty. The only German aircraft I saw tried to sneak in at water level from the northeast only to be caught in murderous crossfire from two cruisers, and it fell into the Channel in a long splash of flame.

“I led the flight toward the crash in hopes of finding other venturesome Nazis. We saw no more fighters, however, until a squadron of P-47s arrived to relieve us. I gathered my Mustangs and flew up the coast to Calais where we jumped across the Strait of Dover to our base at Maidstone. We arrived in time for lunch, and to find that our squadron was scheduled for another C-47 and glider escort that afternoon.

“We flew down to the southern tip of England and picked up another long string of ‘Gooney Birds’ dragging gliders, and took them across to Utah Beach where they penetrated five or 10 miles and cut their gliders loose. I watched the gliders in fascination as they made their tight little spirals; they didn’t waste much time and many of the landings I saw looked pretty rough. Knowing that glider pilots had to join the ground troops to fight their way out, it seemed to be a pretty rugged job, and as we took the C-47s back to the Channel, I thanked the Lord again for making me a simple fighter pilot.”