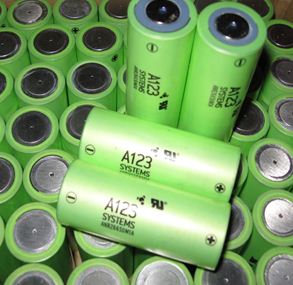 If you haven’t tried the relatively new chemistry A213 cells to power your airborne system, you should read about Dick Pettit’s tests and the surprising results!

After doing some experimenting with several battery chemistries over the years, I decided to convert all my airborne batteries to the popular Lithium NanoPhosphate technology.  They are manufactured by A123Systems, and are commonly referred to by the nickname A123.  These are available from quite a few distributors, but I have had excellent results by purchasing brand new 36 volt cordless power tool battery assemblies, disassembling them and making 5 batteries with 2 cells each for little more than $20.00 per battery.

After using this powerful battery technology for more than a year, I wanted to see exactly how well they performed in my airplanes.  First of all, since the discharge curve is basically a horizontal straight line, falling off only slightly before the battery runs dry; there is no really good way to check the state of battery charge during actual operation.  There are several “gas gauge’ type devices that are available that measure and record the amount of charge removed from the battery.  These are rather expensive and I decided the best and most economical way to check the state of charge is to measure the amount of charge put back into the battery after use.

This can be done easily with a battery charger suitable for use with this battery chemistry and one that can record and display the number of milliamp-hours put back into the battery.  Many chargers can do this, including the one I use on a regular basis.  Since all battery technologies are not 100% efficient, I had to determine the efficiency factor of the cells I am using.  According to the A123Systems web site, their cells are approximately 93% efficient, meaning that they require about 7% more energy put back than is taken out.  Simple mathematics will give me a pretty good approximation of how much charge can be taken out and how long I can fly my plane.

First on the list of things to do is to fully charge my batteries using the same charger and charge regime as I plan to use after the test is complete.  Now that the batteries have been charged, I headed out to the flying field and flew my test airplane, a 33% Bucker Jungmann that weighs about 25 pounds and is powered by a Zenoah G-62 engine.  The 7 servos are connected to a Spektrum DX7 7000 series receiver and are powered by a pair of 2300 maH 2 cell batteries, each connected through a charge switch.  The ignition system uses a third battery of the same type and it is connected through a homemade 5 volt regulator since the ignition cannot take the voltage of the A123 batteries directly.

I flew the plane 5 times, each flight lasting about 8 minutes or so, and turned the radio system on and off as I usually do.  My transmitter recorded 41 minutes of on time, so I will use that as the amount of time the whole radio system was operating.  Nothing else was done to the batteries during the test flight session, including checking the battery voltage using an expanded scale voltmeter, which is practically useless when A123 batteries are being used.

Back at home, I set up my battery charger once again and began recording how many milliamp-hours were put back into each battery.  Battery “A” needed 142 maH put back while battery “B” needed 139 maH.  Right off the bat I realized that these batteries were pretty well matched.  The ignition battery needed 178 maH to become fully charged.  Since the batteries are 93% efficient, I calculated that battery “A” actually provided 132 maH for the flight and battery “B” provided 129 maH, and the ignition battery provided 165 maH to the ignition system.

Since I flew the plane 41 minutes, which is 0.68 of an hour, I added the power provided by batteries “A” and “B” and calculated that the average current delivered by both batteries was almost 389 milliamps.  You have to realize that the resting current of the servos is about 10 milliamps each and the receiver consumes almost 60 milliamps, which adds up to a resting current draw of about 140 milliamps.

However, the real reason for all this testing is to determine how long this particular plane could be flown under the exact same conditions before the batteries needed charging.  If the total power available from both batteries us 4600 maH, and you add in a generous safety factor of 50%, the amount of time that could be flown with this plane under the exact same conditions without recharging is 8.8 hours.  The numbers that were calculated for the ignition system were equally as impressive, calculating out to be almost 7 hours of flying time with the same 50% safety factor.

I tried another experiment with an A123 battery to determine how much self-discharge takes place over a period of time.  Some of the other battery technologies will discharge as fast as 2% per day or more, meaning that if you just leave your battery in your plane with the power switched off, it will discharge to an unusable level in 30 days.  I therefore used this 30 day number to test the A123 batteries for their self discharge rate.

After fully charging a battery using my charger, I put it on the shelf in the workshop and set a reminder on my computer to test that battery in 30 days.  I did nothing to the battery during those 30 days other than to glance over at it once in a while.  When the reminder came up on my computer, I recharged the battery using the same charger and charge rate as I used to begin with.  To my amazement, the battery only needed 7.5 milliamps added back to be fully charged.  That calculated out to be 3% self discharge in 30 days, or 0.001% per day.  That is amazing statistic to be sure.

While there may be other battery technologies out there that seem to do a fine job for many modelers, I have come to love and trust the A123 technology to the extent that it is used in each and every model I fly, and will continue to do so until something better comes along.     -Dick Pettit