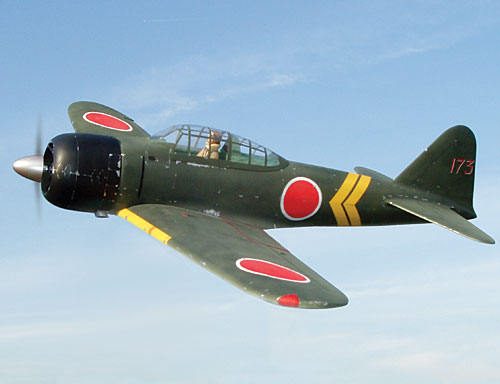 The Imperial Japanese Navy’s Type “0” fighter is probably the most recognized Japanese aircraft of World War II. Coming as a bit of a surprise to the Americans at the beginning of the war, it was widely used during the sneak attack on Pearl Harbor. Years ago, my father started building .19-sized Zero, but he passed away before finishing it. I remember seeing the framed-up Zeke hanging in the rafters, waiting to be finished. I’ve always liked the clean lines, and excellent force arrangement of the Zero, and so I sat down and drew out what you see here. Several considerations were made including keeping the tail light, the nose strong, and construction simple.

I designed a “quick release” latch setup so the entire wing comes off quickly and easily. It has worked out great, there are no hatch lines on the fuselage, and changing batteries take only seconds.