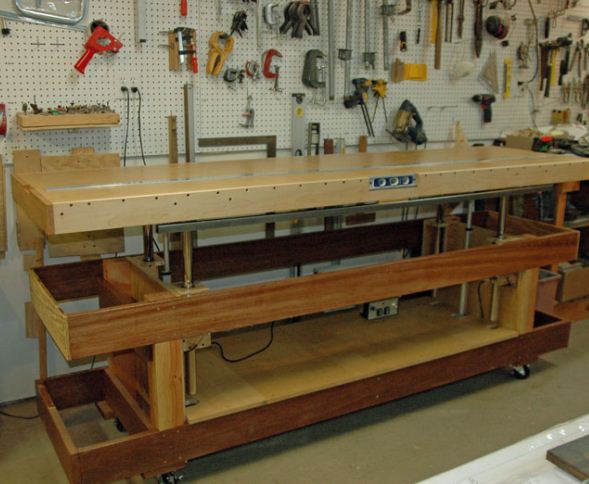 Avoid back pain while building model airplanes with this adjustable unit! When designer Joe Marrone saw an electrically adjustable workbench for sale, he set out to build his own. Here’s how you can build one, too!

I love to build airplanes, mostly from kits, occasionally from scratch, and even an occasional ARF.  I have always used a fixed-height building workbench situated at about 39-inch height, which is about average for such surfaces.  But working on a large 1/4- or 1/3-scale airplane had me sometimes working on my knees, and sometimes working on a stool in order to reach the area of the plane I was working on.  Then I saw an industrial work table whose height was electrically adjustable, and immediately saw the benefits of this to my hobby.  After surveying the available industrial models, all of which exceeded my budget and all of which were a compromise on what I really wanted, I set about designing a custom workbench that I could fabricate using the tools available in my workshop.  What resulted was a workbench that is 96 inches long, 24 inches wide, and which adjusts in height from 30 to 48 inches.

This workbench was built in two stages; first the base unit with the two lifting mechanisms was built, and second, the top work surface was built and married to the base unit.  The heart of the lifting mechanism is a linear actuator, a fancy term for a long jack screw.  The linear actuator I selected is the Firgelli Automations FA-240, which operates on 12 VDC, has a travel of 18” and can lift/support 200 lbs. Two of these were employed, located 60” apart so they could lift the work surface in tandem, thereby supporting up to 400 lbs.  I calculated that the work surface would weigh about 100-120 lbs, so that left plenty of lifting power for even the largest plane I anticipate building. 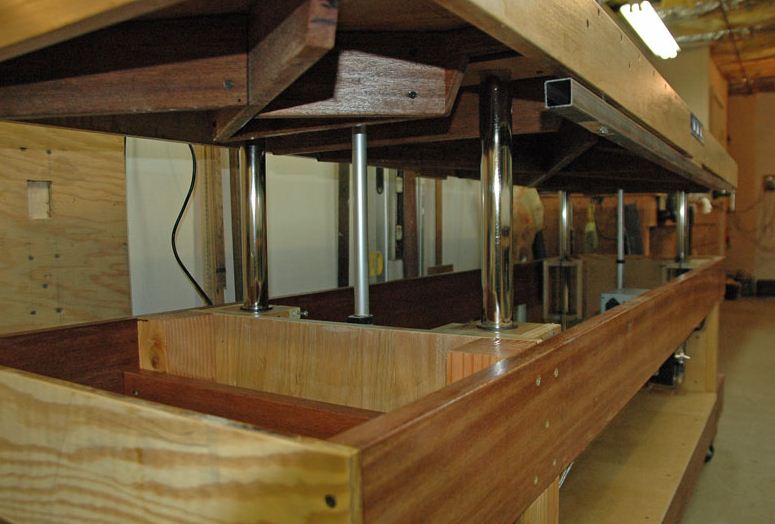 It turned out that the biggest design challenge was how to allow the work surface to slide up and down with very little play so it would remain rigid throughout the full 18” travel.  I built a few prototype designs in 1/12 scale to test my ideas, and decided on tubes within long bearings as the solution.  Each of the table lifters consists of two 11/2 inch diameter aluminum tubes spaced 16 inches apart.  These tubes slide up and down through hard plastic bushings rigidly mounted 8” apart in a very strong ¾ inch plywood box. 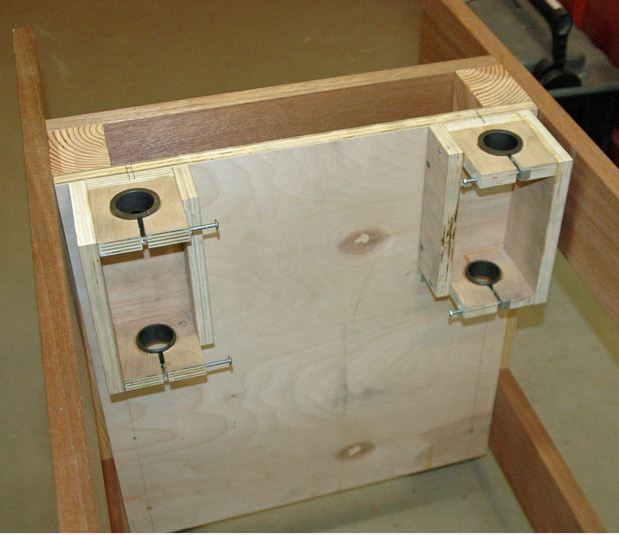 At the top of the tubes is a framework made up of steel angle iron and oak blocks that tightly hold the tubes together and form the lifting surface for the table top. 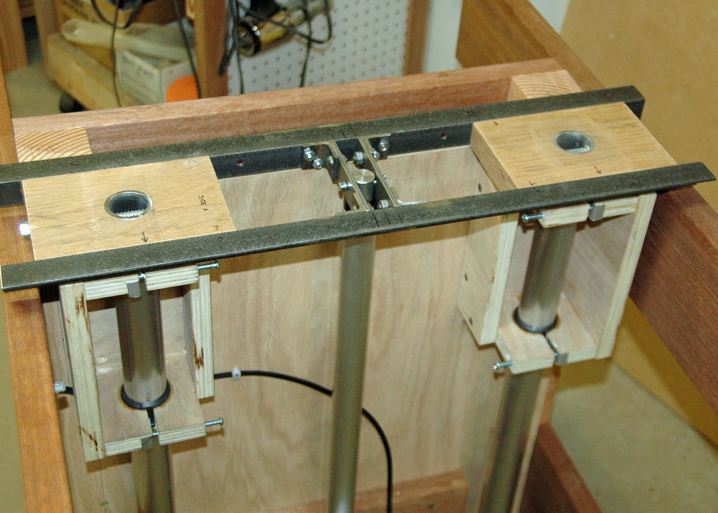 The actuators attach to the center of these frameworks so the upward lifting force is exactly centered between, and parallel to the tubes, thus eliminating any side or binding forces on the tubes.

The table top was built separately from the lifting base unit, and when completed, it was placed on the two lifters and attached with screws to keep it in place.  To operate the lifting mechanisms, I used two rocker switches that independently drive the two actuator motors either up or down.  I was concerned that if the two actuator motors worked at different speeds, the sliding tubes at opposite ends of the table might bind in the bushings.  To solve this, there is a level mounted on the middle of the table top to indicate if it is level.  As the actuators are raising or lowering the table top, I keep an eye on the level to make sure the two sides are lifting at the same rate.  If they get out of synch, I simply let up on one rocker switch until the other catches up, and then re-engage the first one so they once again work together.  I found this was the simplest way to keep the table level as it travelled up and down, and so far I have not experienced any binding problems with this approach.

The base unit was constructed using the best straight-grained 4/5 inch lumber I could find because I wanted to avoid any twisting of the frame after it was built.  I found some nice mahogany boards at a building supply lumber yard that seemed just right for the job.   The table legs were cut from a construction grade 4”x 4”x8’ fir post.  The posts were notched at top and bottom to receive the long 5/4×6 mahogany boards, which were joined to the posts with 3” screws while everything was kept nice and square.  This completed the two sides of the base unit.  Next I joined the two sides together using cross members made from 5/4×6 mahogany boards.  This completed the lower frame.

After the lower frame was done, wheels were put under each of the posts so it could be rolled around the shop.  Next I built the sliding mechanisms, which are four plywood box-like structures that hold the plastic bushings. They were mounted, two at a time, on two ¾ plywood panels that could be mounted to the 4×4 posts on each end of the base unit.  The key to this step was to make sure the sliding mechanisms were perfectly square to the table AND the two tubes at each end were perfectly parallel to each other to avoid binding of the tubes as they slid up and down.  This took considerable time because I had to make a jig to insure the tubes were parallel in their bushings, and also insure that everything was square to the base unit.

Next, it was necessary to join the right and left pairs of tubes with platforms across the tops.  This was necessary for two reasons.  One, I wanted the two tubes to be rigidly connected together so they would go up and down in the bushings as one unit.  Second, there needed to be a flat surface across the tops of the tubes to create a lifting surface for the underside of the top surface.  This led to a hybrid assembly consisting of 1” square angle iron and oak plates.

11/2 inch diameter holes were drilled in the oak plates to receive the aluminum tubes.  The angle iron was attached to the oak plates while they were on the tubes so the spacing was exact.  Then a set of short pieces of angle iron were mounted between the long angle iron rails at the midpoint, to create a way to join the linear actuators. Finally, long bolts were used to secure the aluminum tubes in the oak plates.  The assembly of the tubes and the lifting panels was tested by hand to see if they would slide up and down with minimum force, yet stay tight enough to have little play.  Without going into too much detail here, let’s say this took the most time to work out because of the inexpensive way I chose to implement the sliding mechanism.  It took several iterations and some specific modifications of the bushings and bushing blocks before I got it right.  Finally, I had to resort to having the aluminum tubes nickel plated to avoid galling in the bushings.

Now it was time to install the linear actuators so the system could be tested in actual use.  The linear actuators were attached to the plywood panels at the bottom end using special brackets for the actuators.  A pin goes through the bracket and a mating hole in the bottom of the actuator to anchor it.  Similarly, the top of the actuator gets pinned to the lifting surface to anchor it at the top.  Once this was accomplished, I powered up the actuator motors independently with a 12 volt DC power supply I had retrieved from an old computer.  Much to my delight, everything worked as planned.  The lifting surfaces went up and down a full 18 inch travel. 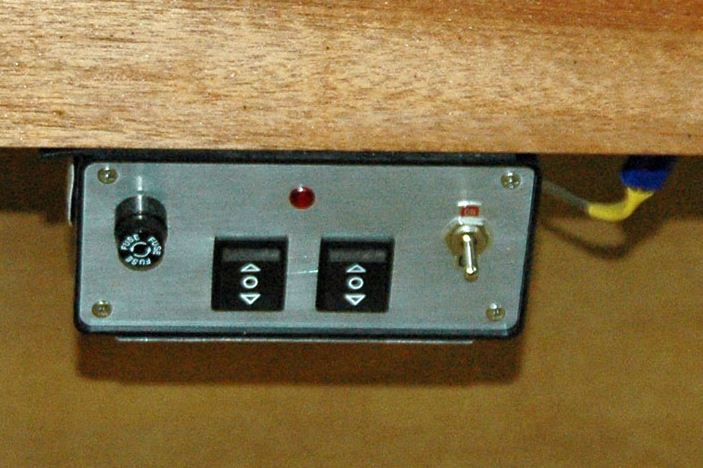 Next came the small control panel with the two rocker switches to control the linear actuators independently. This was constructed from a small plastic electronics box purchased at Radio Shack.  Along with the rocker switches, this control panel has an on/off switch, a fuse, and a pilot light.  The 12 volt power supply was mounted behind one of the base unit side panels.  It and the actuators were wired into the control panel using EC3 connectors like we use on out flight batteries so things could be disconnected for trouble shooting, if needed. 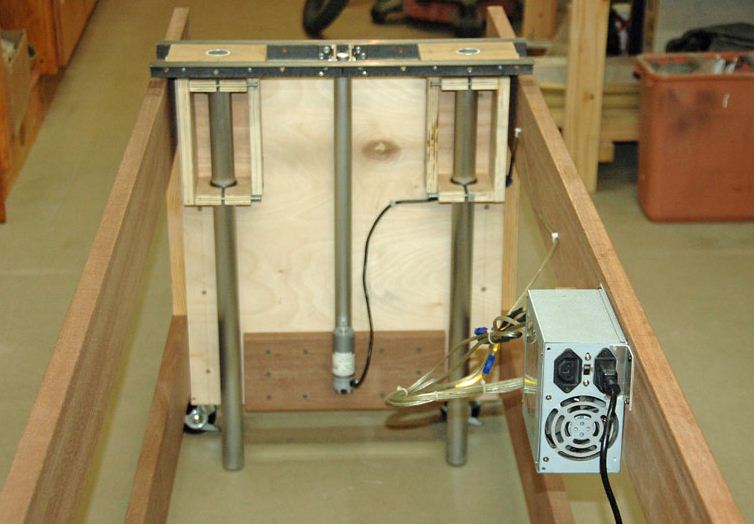 Once all the wiring was complete I put a heavy piece of plywood across the two lifting platforms and turned on the power.  Again I was very pleased that the two actuators worked together to raise and lower the surface, but noticed that one was doing so a bit faster than the other.  Using the two independent rocker switches proved a very good move because I could regulate the two lifters to work in unison by putting a level on the plywood so I could keep it level while it was moving.

The last step was building the top work surface.  This was built using a light variety of MDF, or medium density fiberboard.  Not to be confused with cheap particle board used in so many applications today, MDF by comparison has a very smooth and flat surface and has very good dimensional stability.  However, since it is relatively easy to bend, it has to be very well supported in order for it to remain flat.  To achieve this, I took very straight mahogany 1×4 boards, and glued / screwed them on end to the bottom of the MDF, creating a rigid foundation.  These supports were arranged in such a way that the MDF surface would resist longitudinal, latitudinal and twisting forces.  Finally, I wrapped the entire perimeter of the MDF with 1×4 maple boards that were selected for straightness.  The final result was a very strong and almost flat building surface that weighed about 100 lbs (see Photo 6).  I say almost flat, because when it was permanently attached to the lifting panels, I measured about a 1/16 inch sag in the middle.  After a lot of sanding with a 3 foot sanding bar to take out the high spots and flatten the ends, I had to resort to additional support for the center by using some square steel tubing as a truss on either side to “jack up” the center section. One of these can be seen in Photo 6.  This almost eliminated all of the low point.  While I don’t have a very good way to measure the flatness of a large surface like this, I do have an 8 foot piece of extruded aluminum bar that is 2 inches wide.  Placing this across the top surface I can only detect maybe 1/32” or slightly larger waves in the surface.  It’s not perfect, but close enough for building straight wings and fuselages 6 to 8 feet long.

One additional detail was needed:  I was concerned that if the wheels were not on a level surface, which is the case in my workshop, that the extreme left and right ends of the work surface might become twisted with respect to each other.  To address this, I mounted a small level on each end of the work surface so I could see if there was any twist.

I have been using this new workbench for a few weeks, and it has proven to be a good investment of time and money.  The ability to adjusting the table height for each different operation is wonderful, and eases the strain on my back and shoulders.  Building airplanes has always been fun for me, but with my adjustable height workbench, it has put building on a whole new level (pun intended!). 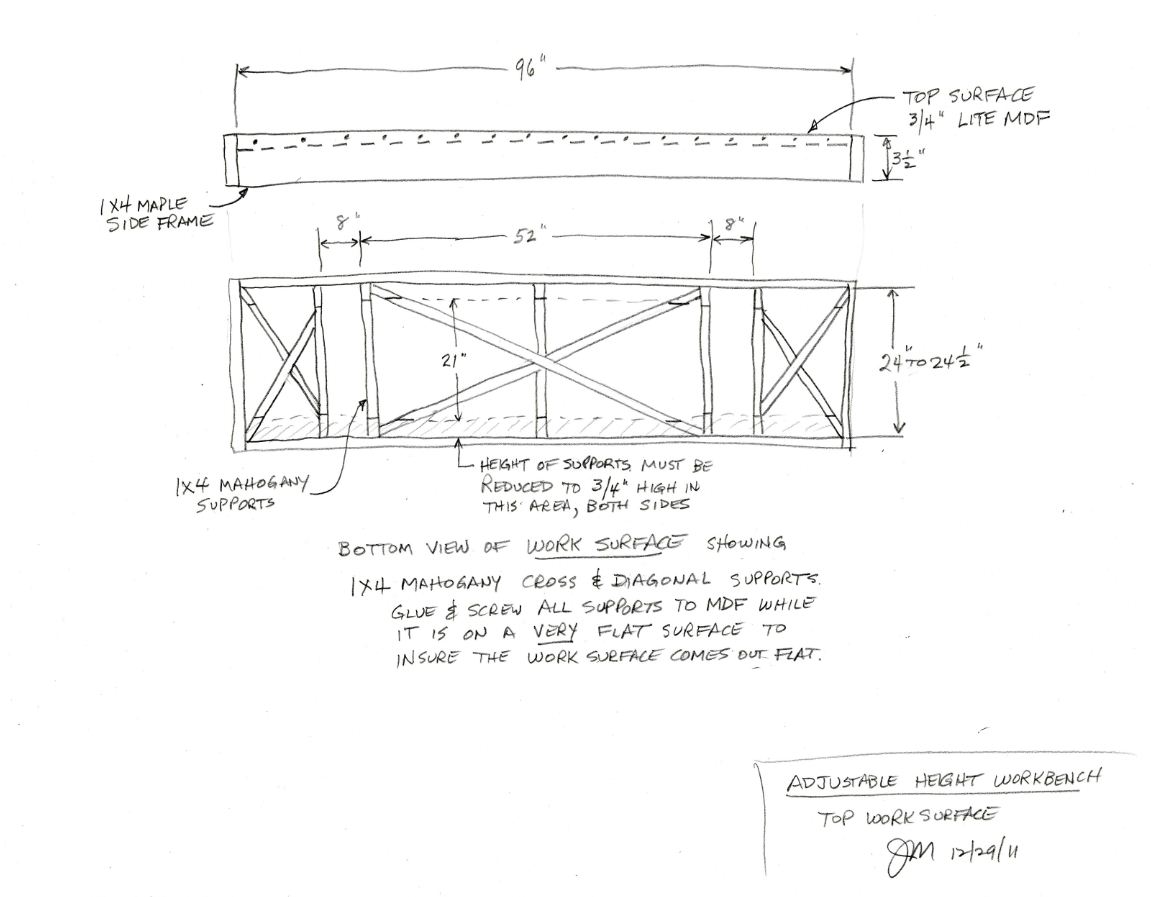 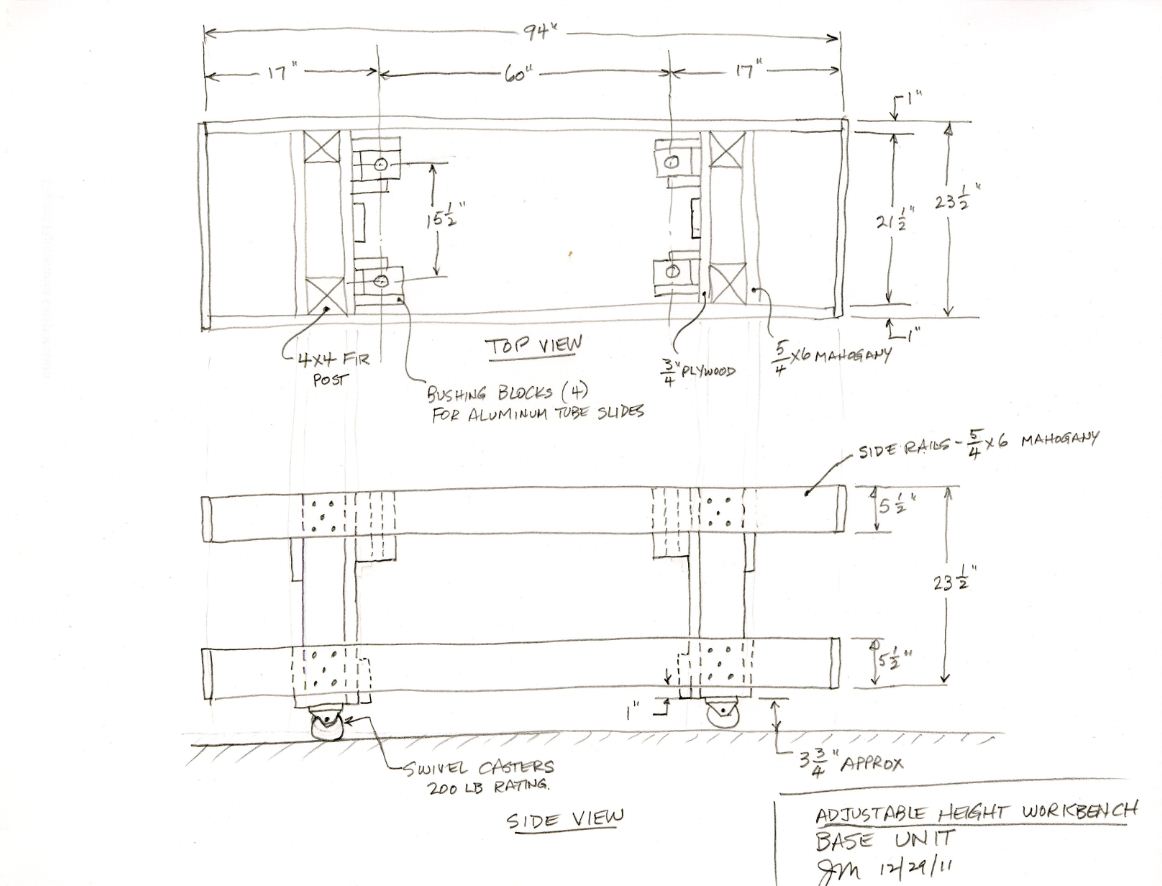 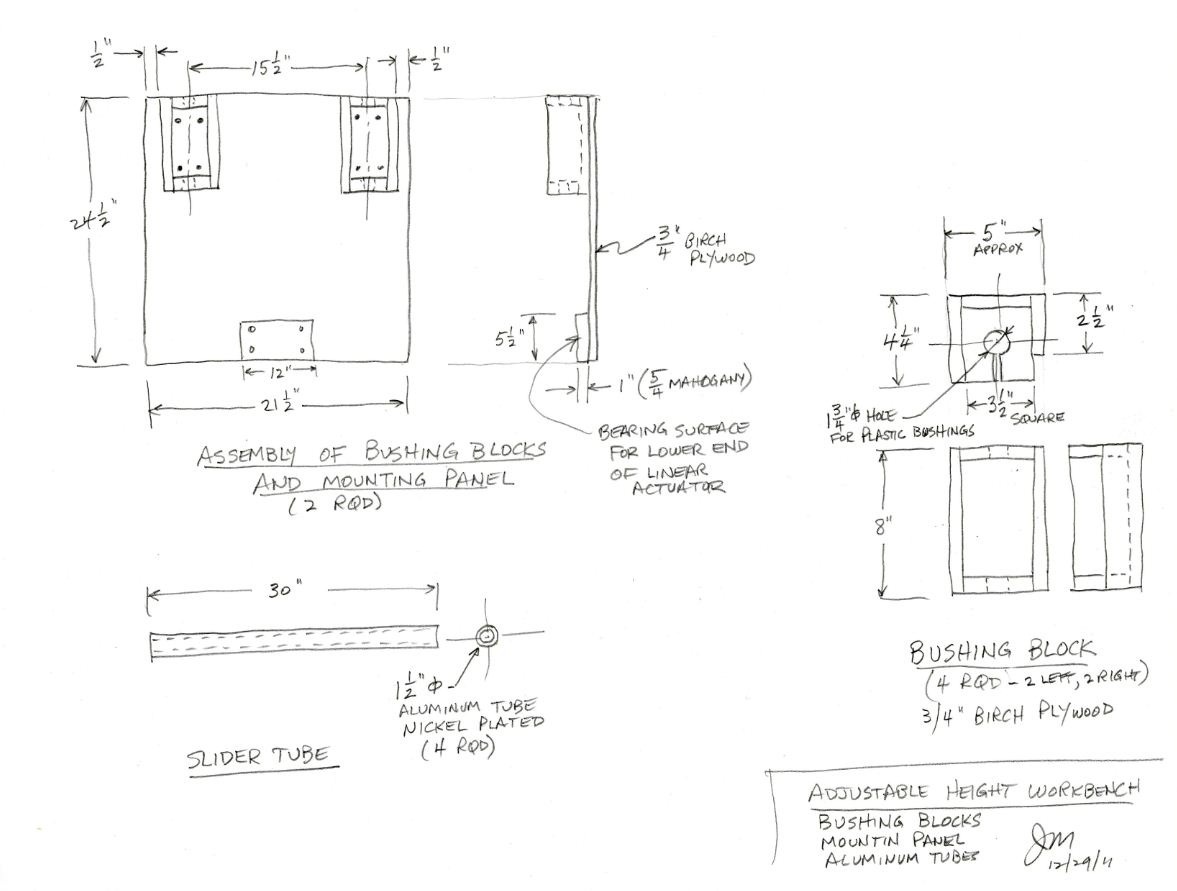 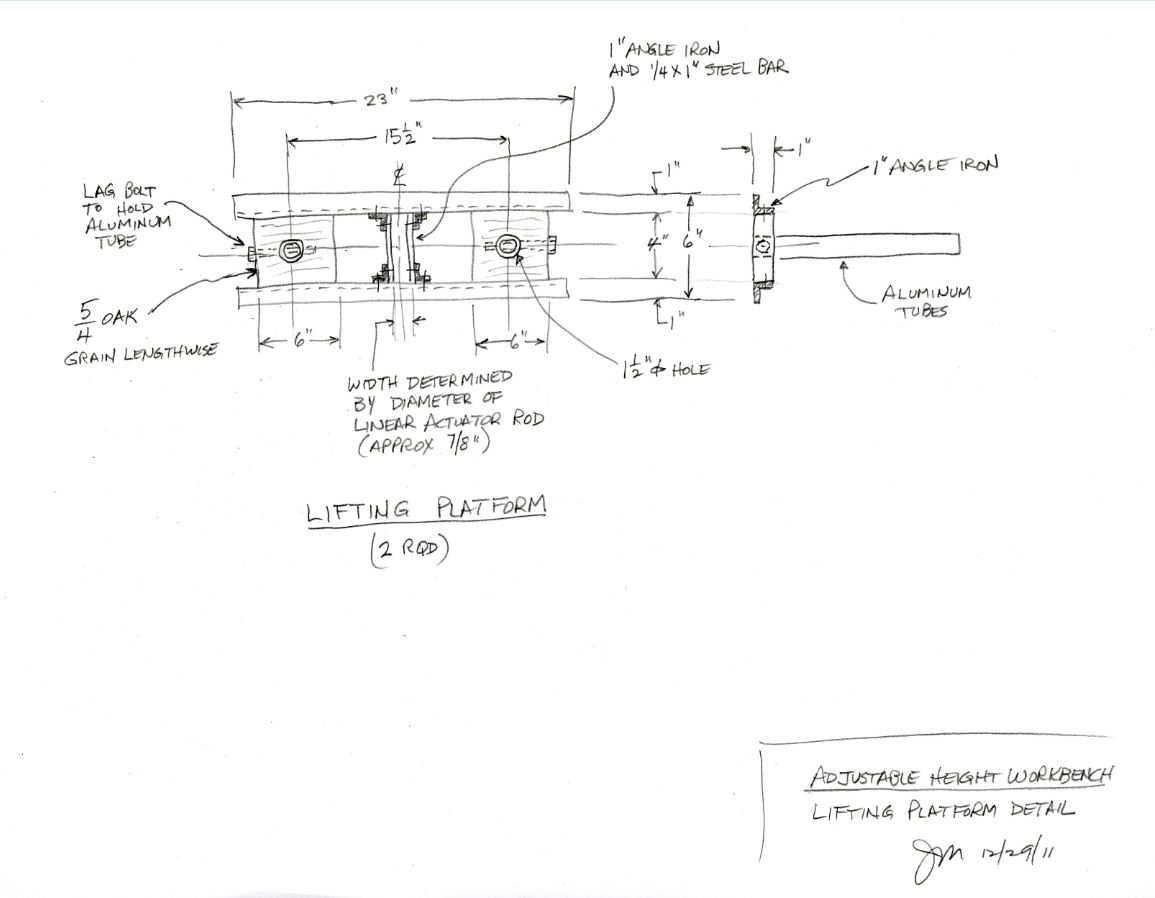