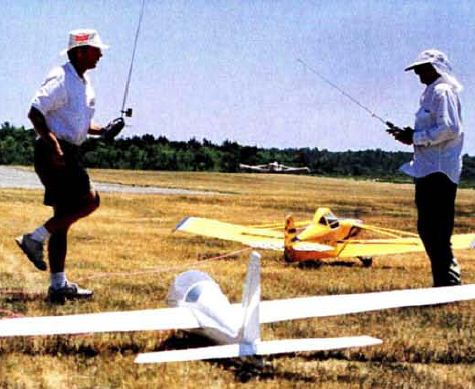 In this article from the MAN archives, Dave Garwood share what it takes to get involved in aerotowing, from the planes to the equipment to the techniques.

Aerotowing is growing rapidly, both in interest and sophistication. The grace and majesty of a large-scale sailplane launched by aerotow-plus the unparalleled opportunity for cooperation and interaction between pilots of sailplanes and powered planes-has fueled an explosion in the number of pure aerotow events held in recent years in such diverse locations as Elmira, NY, Fayetteville, NC, Pensacola, FL, Los Banos, CA, Yakima, WA, and Ontario, Canada.

RC model aerotowing has come of age. For decades, it has been the most common way to launch full-scale sailplanes, and it is now recognized as the safest way to launch large, longspan, scale model sailplanes. This article seeks to illuminate the fundamental concepts needed by those new to aerotowing, so they may succeed on their first try at this cooperative endeavor.

Aerotowing works best for large sailplanes-those too big and heavy to be launched safely by winch. The practical minimum span for sailplanes is 3 meters, or about 120 inches. Towing a smaller sailplane will make you feel as though you have a tiger by the tail the whole way up. In addition to towing planes with spans of 3 meters or longer, you’ll want to be confidently familiar with the flying characteristics of your sailplane. Beginning aerotow launches generate enough jitters without introducing the variable of an unfamiliar sailplane.

Towplanes come in many shapes and sizes, but high power, large size and high stability are good attributes. Here are some guidelines:

For gliders that weigh up to 10 pounds and have wingspans of 3 to 4 meters, a Hobby Lobby* Telemaster powered by a 1.08 O.S.* 2-stroke is at the low end of the spectrum, and a scale Wilga with a Brison* 4.2 is at the high end. The static thrust of the engine and propeller combination should be roughly equivalent to the weight of the towplane. For example, a Telemaster should pull about 13 to 15 pounds of thrust.

Getting the sailplane ready for aerotow launch begins with fitting a towline release mechanism. A servo operates a commercially available or homemade mechanism wherein a wire captures a loop of line; advancing the wire captures the towline; withdrawing it releases the line.

The towline capture mechanism is mounted near the nose of the sailplane, although it does not have to be in the very tip of the nose. It is not mounted under the wing like a winch-launch towhook.

Scale sailplanes can use more scale-like release mechanisms that are available from suppliers such as Critter Bits*, Hobby Lobby* and Sailplanes Unlimited*. Note that both the sailplane and the towplane have towline releases; if the sailplane is unable to release for some reason, the towplane can release the line.

The towline typically includes clip devices at both ends so sailplane pilots can insert a string loop into their towline release devices in the “ready” area to save time on the flightline. A swivel reduces line twisting and tangling. Some tow pilots use a stretchy section to smooth shock loads on both aircraft; others do not. A flag at the sailplane end of the towline makes it easier to confirm at a distance that the sailplane has, in fact, released the line.

Towlines are made of about 150-pound test line, but they may contain an intentionally weak link section that’s designed to break the line under stress (such as when one plane departs from controlled flight, and an intentional release is not or cannot be made).

Sometimes, a launching dolly or small wheeled cart is used, especially for training. The dolly holds the sailplane a foot off the ground, sets the wing angle of attack and fixes rotation about the three flight axes until the sailplane gets up to flight speed and gains control authority. Landing gear serve a similar purpose for the towplane. For the first few launches, the dolly makes the job easier for the sailplane pilot, as it controls some of the variables.

Key to success in aerotow operations is a tow pilot who is a smooth, accomplished flier with substantial flight time on the tow aircraft. He or she must be experienced in all phases of powered RC flight and must be utterly familiar with the towplane. It’s helpful if the pilot has flown sailplanes as well. The tow pilot must be able to fly large, smooth circles while towing a sailplane at a steady rate of climb until both planes are nearly out of sight.

It sounds easy, but it isn’t. Practice is important. Each sailplane has unique towing characteristics, and elevator trim on the towplane must be adjusted accordingly. The tow pilot’s experience will allow him to not only fly his own plane but also to look out for the sailplane pilot, who may have less flying experience.

Moderate piloting skills are all that are needed for the sailplane pilot. He should be able to confidently launch and land the sailplane and fly it both away from and toward himself, and he should have enough experience to handle both a forward stall and a single-wing stall. Experience at flying the sailplane from a substantial distance away is most helpful.

The sailplane pilot’s main job is to keep the sailplane’s wings level and maintain the correct height above the towplane. The towline will yaw the sailplane, and banking in turns is not needed. Sometimes, outside rudder is needed on the sailplane to keep the towline taut. Following a towplane is easier with an aileron sailplane that has rudder uncoupled than it is with a polyhedral ship.

While on tow, the sailplane will be flying faster than it does on its own. Be prepared for the snappy control responses and the sailplane’s newfound capability to get out of shape quickly. If you have highwind slope experience or powered flying experience, this will not be a surprise. In any case, stay alert while on tow, and fly the plane; don’t let the plane fly you.

The two pilots stand near each other throughout the tow so they can easily converse. The direction of the first turn should be established before takeoff. After a final radio check, the sailplane pilot advises the tow pilot that he’s ready, and the tow pilot begins the takeoff run. The towline connecting the two planes is drawn tight. The tow pilot advances the throttle and begins the takeoff roll; the sailplane lifts off and begins flying first. When the towplane reaches takeoff speed, it lifts off.

As soon as both planes are up and flying, probably at about 50 to 75 feet altitude, the tow pilot should establish a gentle turn. It’s important not to fly out too far before turning, as the planes become more difficult to see as they get farther away.

The tow pilot should fly large, gentle circles or figure-8s. The climb rate should be in accordance with the power of the towplane and the weight of the glider; shallow is usually better than steep. If the glider overtakes the towplane, then the tow pilot may increase his speed, or the glider pilot may feed in a little up-trim.

When cruising speed has been reached, the pilots begin a climbing turn, and the flight path on tow becomes a giant upward spiral (this ensures that the planes can still be seen). The towplane is the formation leader, of course, and the sailplane pilot flies slightly above the towplane to stay out of his wake. The sailplane flies turns of a larger radius than the sailplane to keep the towline taut.

The two planes may circle several times until the desired release altitude has been attained. At this point, the sailplane pilot declares he is ready to release, and he hits the release switch on his transmitter, drops the line and tells the tow pilot when he is off the towline. The tow pilot dives away from the sailplane, quickly loses altitude, lands and sets up for the next tow. The sailplane pilot begins the search for lift or begins an aerobatic routine.

Do not fly higher than you can see. This sounds obvious, but it’s worth remembering, as a sort of “rapture of the deep” can produce an exhilaration that clouds judgment in this area. When in doubt, release the line and terminate the tow. You can always begin another one.

The result of aerotow teamwork is a sailplane launch that is higher, gentler and more aesthetic than a winch or bungee launch. The capability of this launching method to put your sailplane in any part of the sky and at any desired altitude generally starts a great soaring flight. When you’re back on the ground, you’ll want to try it again. 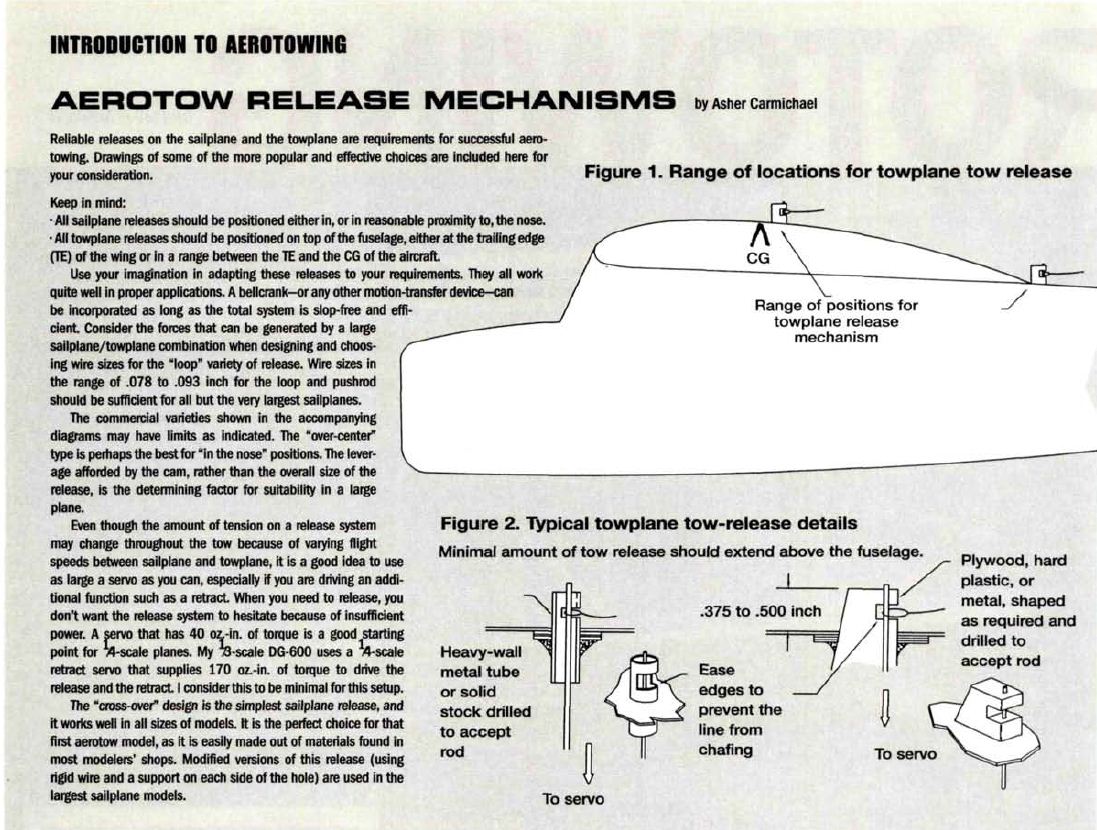 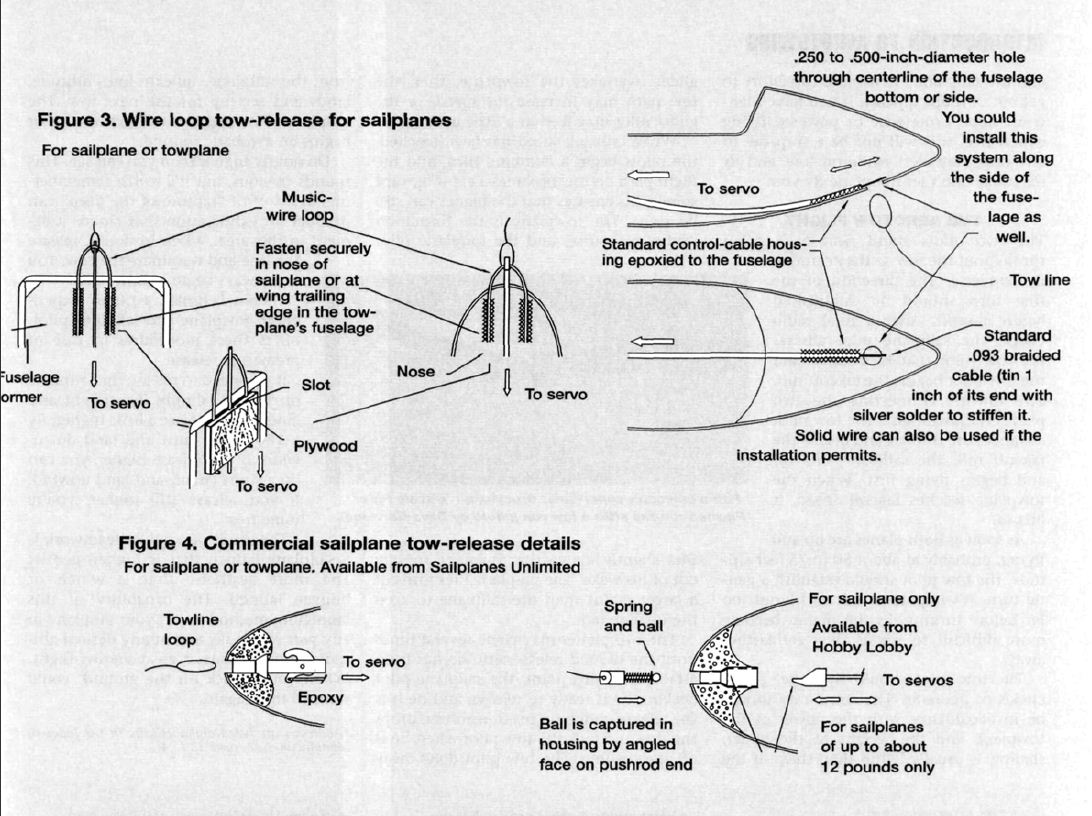