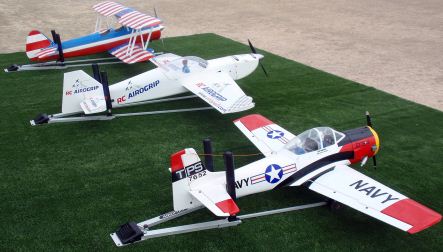 Contributor Frank Tiano shares some news about a new plane-restraint device that makes starting your engine a safer and more relaxed experience. “Back in September 2010 Stuart Baker called me to discuss a new gizmo/tool, for RC model airplanes he was developing, and encouraged my opinion. After viewing some original concepts I told him I thought his idea was worthy of spending countless more hours of blood, sweat and tears, to perfect it. Almost two years later, in May 2012, Stuart offered me one of his production versions for my criticism, good or poor.

It’s called, simply, an Airopult. Like in Catapult, but it doesn’t launch Cats, it launches airplanes. Really? Well no, actually. It doesn’t really launch an airplane, but it does “allow” a pilot to safely restrain and hold tight a model airplane while he starts the engine. And then safely release it.

Hey, let’s face it; we all have fabricated some sort of restraining device or system at least once in our lives to hold back our model so we could be self-sufficient. Sometimes it was merely driving two pointed 2×2 stakes into the ground, just at the leading edge of the stabilizers. Or perhaps you incorporated the use of two massive screwdrivers, whacked into the dirt, at the same position, to hold back the airplane from surging forward as it started, especially if it started at full throttle for some reason! Or maybe you simply enlisted the help of an able bodied friend to crouch over your model and hold it for you, while unconsciously, but aggressively, driving the tail wheel down into the dirt, up to its axle, from all the down force exerted. But other than using a friend to hold the airplane, the other methods merely prevented the airplane from coming forward, at you, but did nothing to hold it from traveling rearward from the force applied when you hit the switch on your Megatron starter.

Well, for those of you tired of forgetting your favorite screwdriver back at the field or who hesitate to ask someone to hold onto your airplane because you don’t have a spare tailwheel assembly in the tool box, this new Airopult may be just the thing for you. Airopult utilizes 4 large Tent Pegs to hold its metal framework to the earth. If you didn’t know better you’d think it was welded to the ground somehow! Yes, it’s that tight. It has two restraining pegs at the front of the unit, adjustable of course, that hold the model from moving forward. It doesn’t matter if the landing gear is wing mounted like in a P-51 or fuselage mounted like in a Taylorcraft or Cub. If used per the instructions, which any occupant of the local zoo could understand, it will hold a rather large model; say anything having up to 100pounds of thrust! Preliminary tests were made by the Spanish IMAC champion with a 160cc engine pulling against the restraints at full throttle. Right now, the only limitation on the size unit I tested is the size of the airplane, in dimension. Airplanes up to 80 inch span seem to be accommodated easily. Anything larger needs to have the restraints placed at a further distance apart. Airopult PRO, due out at a theater near you soon, will address that issue. This unit weighs in at just a tad over 7 pounds so you’re not looking at some lightweight wannabe restraint system here!

Getting back to the review part of this article, upon inspection my initial impression was that the Airopult was well presented and packaged, and I noted not only how well engineered it was, but the exceptional quality of the materials. The unit is extremely easy to use. Place the Airopult on the ground, preferably a surface that allows you to pound in those Tent Stakes. Probably won’t work too well on Concrete or your wife’s hard wood floors. Anyway, then you just place the model so it rests against the vertical restraints. The rear “Release” clicks reassuring into place to indicate it is holding your model securely. After starting the engine, just step on the black release pad and two rear restraints collapse, forward, allowing the airplane to taxi straight ahead. OMG, could it get any easier? Or safer?

Bottom Line. From a cool viewpoint, everyone will wanna have one, and from a safety viewpoint everyone should be made to use one. I see a lot fewer, perhaps none, chopped body parts from forward jerking models with the use of an Airopult. That’s a good thing. You can go to www.airopult.com for some pretty pictures, pricing and additional information, just in case you don’t believe me. Oh yeah, one last thing: Assuming you do get yourself one, paint your name on it and never leave it at the field, because if you do, chances are you may never see it again. It’s that cool.”