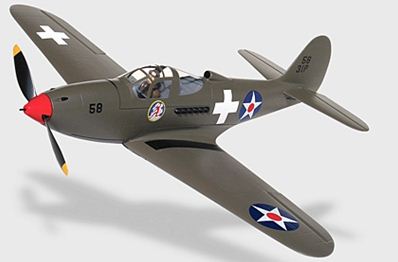 The Bell P-39 Airacobra was one of the first production fighters to be conceived as a “weapons system”. In this case the aircraft was designed around the 37mm (1.46 in) T9 Oldsmobile cannon. This weapon fired a 1.3 lb (610 g) projectile capable of piercing .8 in (2 cm) of armor at 500 yd (450 m) with armor piercing rounds. The 200 lb (91 kg), 90 inch (2.29 m) long cannon was mounted in the forward fuselage firing through the center of the propeller hub for optimum accuracy and stability when firing. The Allison V-1710 liquid-cooled Vee-12 engine was mounted in the central fuselage, directly behind the pilot’s seat. Entry to the cockpit was through side doors mounted on both sides of the cockpit. Its unusual engine location and the long driveshaft caused some pilot concern at first, but experience showed this was no more of a hazard in a crash landing than with an engine located forward of the cockpit.

Distributed by Hobby Lobby International, the new Alfa Models P-39 Airacobra ARF is made of lightweight pre-painted molded foam has a 33 in. wingspan, is 28-3/4 in. long, and has a wing area of 201.5 sq. in. It has a flying weight of 16.25oz.  The model includes waterslide decals representing 6 authentic WW2 aircraft versions, (Three U.S. Army Air Corp., and Three Russian planes.) The one-piece wing is removable. Battery and radio access is under the canopy. It is an easy airplane to hand launch, slows down well for landings. The airplane has a broad speed range with power to spare for aerobatic maneuvers. It can fly about 10 to 15 minutes on a charge. Assembly will take just a few hours. Controls are Aileron, Elevator and Throttle. Requires a 3-channel radio minimum.

Here’s Everything You’ll Need to complete: