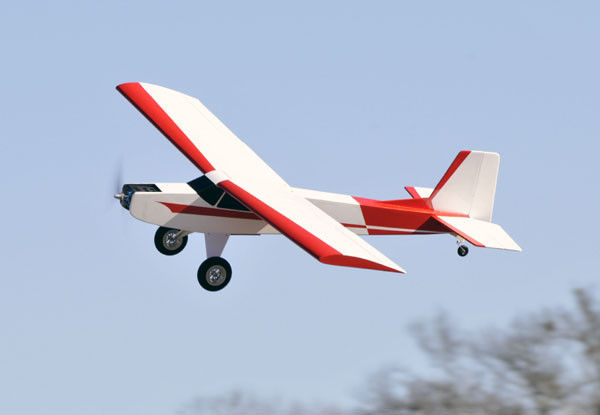 The Alien Aircraft Funmaster 72 build has been very enjoyable.  Here is Part 4 of the workshop build-along. I spent considerable time sanding the airframe so the final application of the covering material (Top Flight Monokote,) would look good. I used Opaque White with a Red trim to make it highly visible in the air. 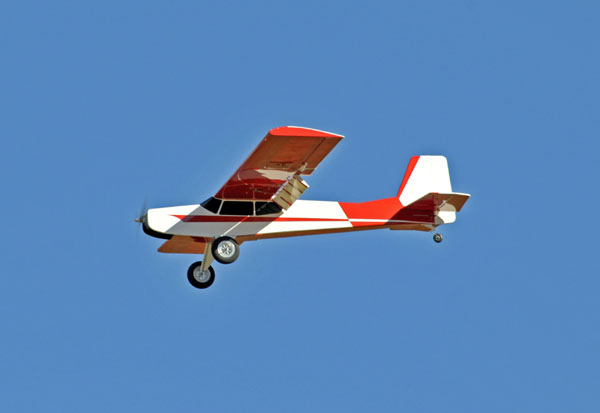 The final assembly went very well with all the airframe parts in place.  In appearance it looks somewhat like a Telemaster-ish  design with a different tail.  Tom Herr’s design with its big wheels and flaps make it look like a tough and rugged bushplane and it is of course a completely different airplane entirely.  Here are some more pictures from my build to show you some of the assembly and tell you how it flew.  Thanks for looking. 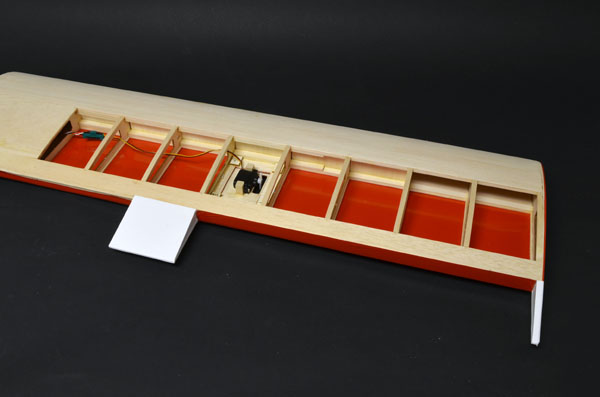 Here’s a tip for you.  After covering the bottom of the wing and before covering the top,  install the servos with extension leads.   You will find it a perfect time to do it.  Then you don’t have to worry about pulling them through with a string or bead chain. 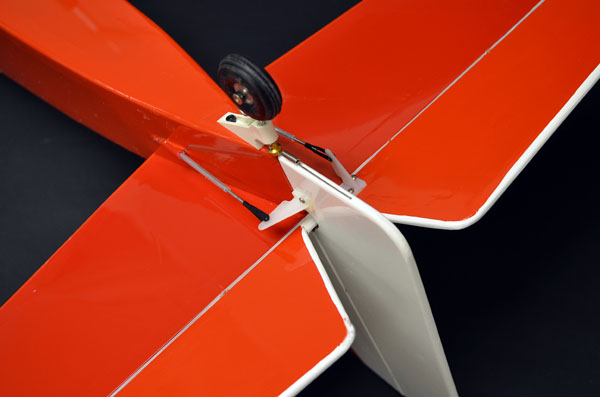 Although you are furnished with tail wheel hardware in the kit, I chose to use the Sullivan tail wheel assembly.  I find the spring tension easier on the rudder servo.  Du-Bro Laser rods were used for the control pushrods. 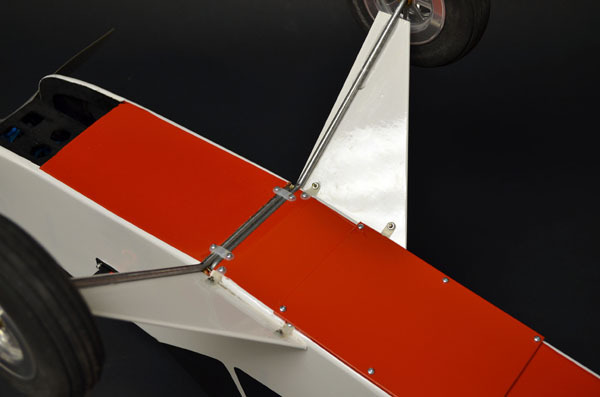 The 3/16” wire landing gear legs are held in place with plastic straps.  The landing gear fairings are bolted to plastic straps at the fuselage and glued at the outer end of the leg with Dap Dynaflex 230 sealer. I also used this sealer to glue in all the hinge points on the control surfaces.  It works great. 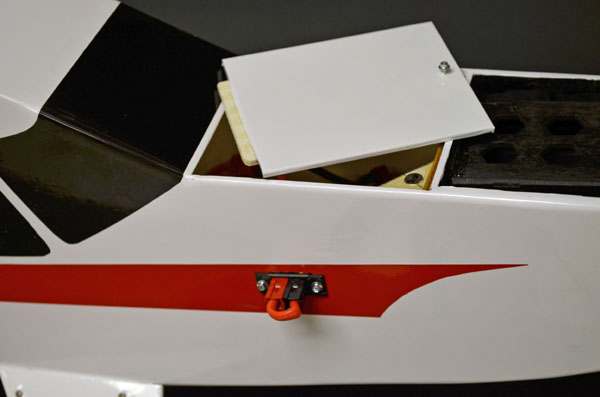 The instructions call for this access cover to be retained with screws.  Might be ok if it accessed the fuel tank.  I retained mine with magnets for easier access for installing or removing the battery.  Note the arming plug.  A good accessory for safety reasons. 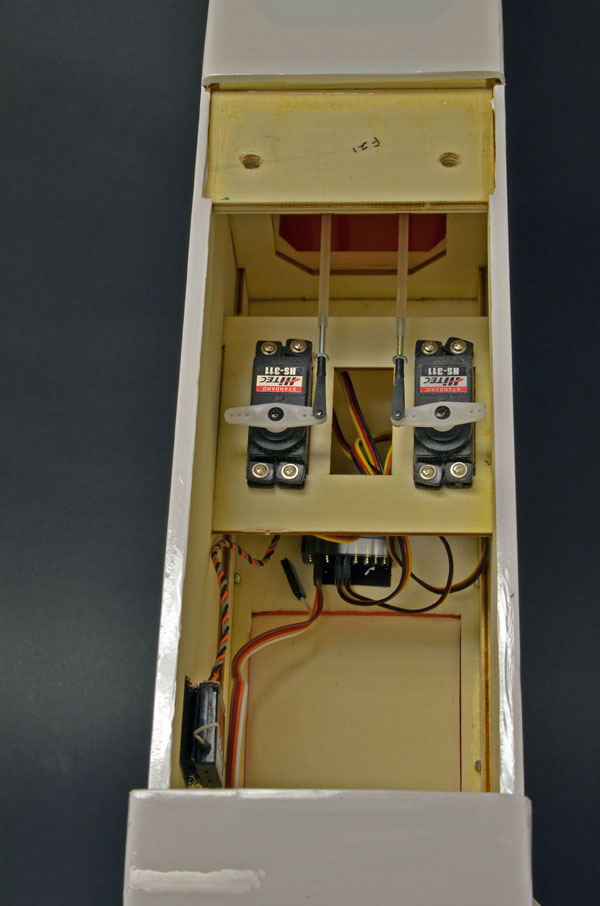 The radio compartment has plenty of room. On the electric version only 2 servos are required to be mounted.  I mounted the receiver under them. 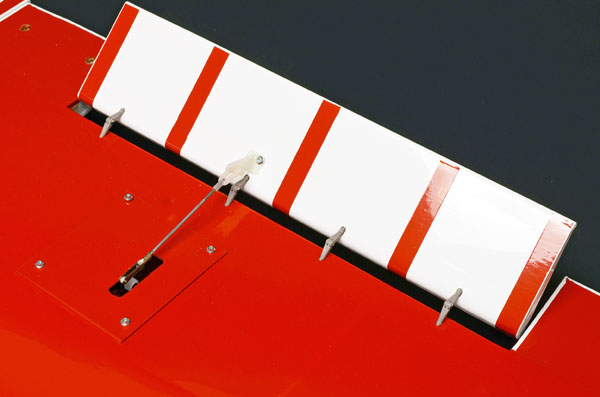 The flap mounted and hooked up.  I chose to make it a different color so you could see it when extended.  They work great! 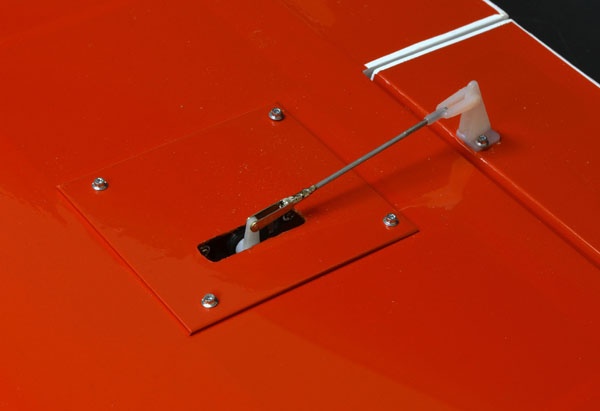 Aileron linkage shown installed.  Note the clevis on the servo arm is soldered with adjustment made on the control horn clevis.  I centered the servo electrically before installing the linkage. 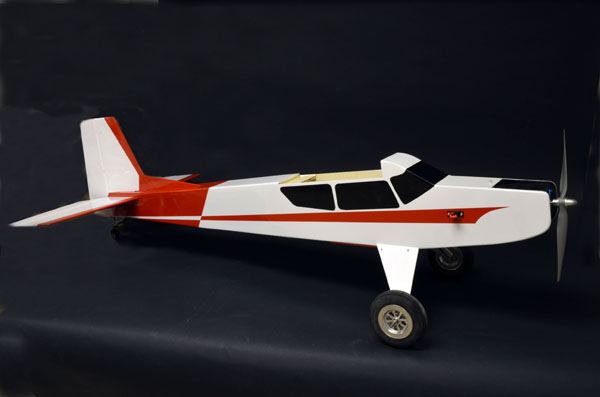 The completed fuselage.  The big wheels I happen to have.  In fact they are at least 10 years old and I could never find a use for them.  Now I have.  They were a little lighter than the recommended Du-Bro 5-inch wheels. 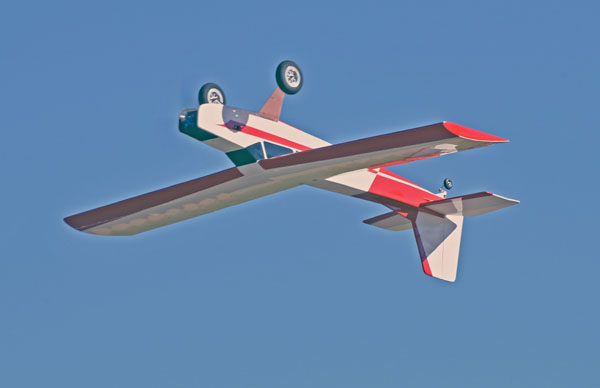 Well, how did it fly?  After checking the CG and control travel it was off to the field.  A perfect day for a maiden and this dude was about to fly.  After a short run it lifted and continued to climb while I put in some down trim.  Because it is a flat bottom wing with incidence it wanted to climb under power. At altitude I throttled back and trimmed pitch for that cruising rpm.  Before flying I knew there might be some adverse yaw so I mixed in some rudder with the aileron to help it turn better.  The motor recommended had plenty of power and would easily loop it from level flight.  I was able to roll, loop, stall turn, and fly inverted.

Slow flight was excellent with good vertical.  At altitude I tried full flaps.  With the amount of flap I had it really wanted to pitch up.  So I landed and mixed some down elevator with the flaps.  I took off and tried it again.  I still needed more. So I landed and put in some more.   You might have to tweak it a little but it did take a lot to hold it.  You will find this a great flying airplane, docile and easy to fly.  And with the extra modules available, bomb bay, bomb drop, accessory plate for mounting a Go-Pro camera, it means your airplane will do so much more.  I really enjoy flying mine and find it a great sport airplane.  Good Job Tom Herr.

To see the beginning of this online exclusive build-along go to: https://www.modelairplanenews.com/blog/2013/12/17/alien-aircraft-funmaster-72-workshop-build-along-part-1/