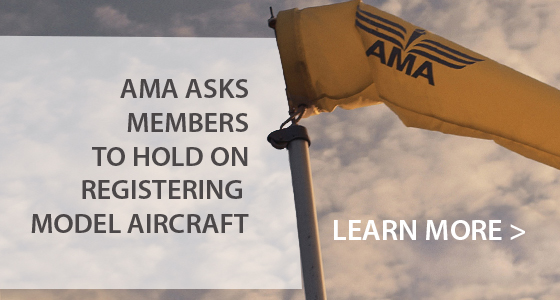 Hold Off On Registering Model Aircraft

On Wednesday, December 16 the AMA Executive Council unanimously approved an action plan to relieve and further protect our members from unnecessary and burdensome regulations. This plan addresses the recently announced interim rule requiring federal registration of all model aircraft and unmanned aircraft systems (UAS) weighing between 0.55 and 55 pounds.

AMA has long used a similar registration system with our members, which we pointed out during the task force deliberations and in private conversations with the FAA. As you are aware, AMA’s safety program instructs all members to place his or her AMA number or name and address on or within their model aircraft, effectively accomplishing the safety and accountability objectives of the interim rule. AMA has also argued that the new registration rule runs counter to Congress’ intent in Section 336 of the FAA Modernization and Reform Act of 2012, otherwise known as the “Special Rule for Model Aircraft.”

The Council is considering all legal and political remedies to address this issue. We believe that resolution to the unnecessary federal registration rule for our members rests with AMA’s petition before the U.S. Court of Appeals for the District of Columbia. This petition, filed in August 2014, asks the court to review the FAA’s interpretation of the “Special Rule for Model Aircraft.” The central issue is whether the FAA has the authority to expand the definition of aircraft to include model aircraft; thus, allowing the agency to establish new standards and operating criteria to which model aircraft operators have never been subject to in the past.

In promulgating its interim rule for registration earlier this week, the FAA repeatedly stated that model aircraft are aircraft, despite the fact that litigation is pending on this very question. The Council believes the FAA’s reliance on its interpretation of Section 336 for legal authority to compel our members to register warrants the Court’s immediate attention to AMA’s petition.

While we continue to believe that registration makes sense at some threshold and for flyers operating outside of a community-based organization or flying for commercial purposes, we also strongly believe our members are not the problem and should not have to bear the burden of additional regulations. Safety has been the cornerstone of our organization for 80 years and AMA’s members strive to be a part of the solution.

As we proceed with this process, we suggest AMA members hold off on registering their model aircraft with the FAA until advised by the AMA or until February 19, the FAA’s legal deadline for registering existing model aircraft.

Holding off on registration will allow AMA time to fully consider all possible options. On a parallel track, it also allows AMA to complete ongoing conversations with the FAA about how best to streamline the registration process for our members.

In the near future, we will also be asking our members to make their voices heard by submitting comments to the FAA’s interim rule on registration. We will follow-up soon with more detailed information on how to do this.

Thank you for your continued support of AMA. We will provide you with more updates as they become available.