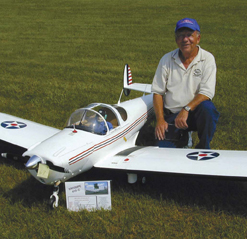 THROUGHOUT MY WORK at Model Airplane News, I have traveled to cover countless regional and national scale competitions and fly-in events and over the years I have constantly bumped into one particular competitor. Jean “John” Chevalier of LaColle, Quebec, Canada, has a rich and lengthy scale modeling history and I consider myself fortunate to have him on my short-list of friends and flying buddies.

I first met Jean back in 1997 at the 5th Annual Champlain Valley Big Bird Fly In held in Champlain, NY. Jean was flying a sporty Skytech Aviation 33-percent scale Superstar aerobatic job. We both hit it off right from the start and that following year I ran into Jean again at the 1998 Top Gun Scale Invitational where he was again flying his impressive, scratch-built 1/3-scale Ryan STM, (a primary military trainer version of the civilian STA). Jean placed 12th in expert that year with an impressive static score of 94.833. He also won the Best Pre-WW II Aircraft award with his STM. The award is one of his favorites as it was sponsored by the good folks at the Old Rhinebeck Aerodrome, Rhinebeck, NY.

And talking about Top Gun, Jean also has the distinct privilege of being the very first Canadian modeler to be invited by Frank Tiano to compete at the Top Gun Scale Invitational competition. It was back in 1993 and Jean competed with a 1/3-scale Ryan STA. He built his classic red and white 92-inch-span Ryan from a Fred Reese kit. All told, Jean has competed at Top Gun 10 times the last time being in 2004. He flew a beautiful 33%-scale Bellanca Decathlon. It was detailed inside and out and it even had small Aviation Sectional maps and Model Airplane News magazines and modeling books in the cabin door pocket. Pretty impressive attention to detail! Just recently at the 2010 Rhine-beck RC Jamboree, I ran into Jean once again when he showed me his beautiful 20-year-old model of a Bristol F2B Fighter. So, for more than 13 years, Jean and I have been showing up at the same sod runways always talking RC scale and enjoying the hobby immensely. I wish him many more years of RC fun!

Jean’s Ryan STM comes in for a landing at the 1998 Top Gun event.

One of the several Super Cubs built and flown by Jean.

How’s this for Cabin detailing?