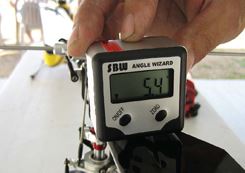 One of the instruments we need in this hobby of ours is a pitch gauge, which is used to measure, set, and adjust the angle of the main rotor blades. Various forms of pitch gauges have been around for years, but all require a certain amount of interpretation in their reading. Wouldn’t it be nice-and easy!-to have a digital readout of the angle instead? Well, the Angle Wizard from Scratch Builder Warehouse (scratchbuilderwarehouse.com) does just that. This neat little box is only 2 inches square and gives a digital angle readout within 1/10 of a degree, allowing us to set and check more angles on our helicopter than we ever thought possible. As an example, with the flybar parallel to the tail boom, the Angel Wizard can be placed on a flat portion of the blade grip or rotor blade to provide a digital readout of its pitch angle. My technique is to place the angle wizard on the tail boom and zero the readout with the button provided. Then, holding the flybar parallel to the tail boom, the angle wizard can be used to provide a digital readout of the pitch of the rotor blade. This makes setting the blade pitch very easy and accurate either on the workbench or at the flying field.

Depending on how accurate you would like to be in setting up your helicopter, here are a few more uses for the angle wizard:

In a similar manner the above technique can be used to adjust the bellcranks so they are also 90 degrees to the pushrods.

Although these are just a few of the uses of the Angle Wizard, I’m sure with a little time and experience we will find even more uses for this neat tool.