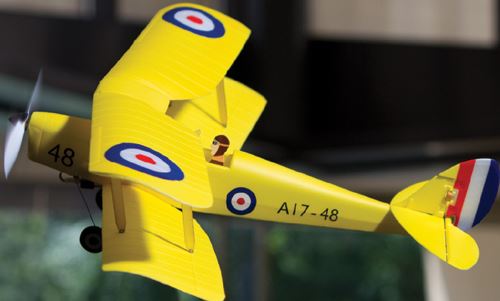 A cool feature is that the “engine compartment” panel is seperate and is attached with a magnet. Here you can see the onboard electronics.

UNIQUE FEATURES
The fully assembled Tiger Moth comes with the propeller and landing gear already in place, the elevator and rudder hinged, and all control linkages attached. Also in the box (of the RTF version) is a 3-channel 2.4GHz transmitter, four AA transmitter batteries, and a 50mAh 1S 3.7V LiPo flight battery pack. The Tiger Moth 75 comes equipped with a compact 3-in-1 control unit that includes the 2.4GHz receiver, speed control, and the elevator servo.

What makes the Tiger Moth interesting is that the rudder is moved with a magnetic actuator instead of a servo and pushrod linkage. A small magnet is attached to the front of the rudder and is placed inside a small coil of fine wire. As you move the transmitter stick, you change the polarity within the coil and it moves the magnet one way or the other to pivot the rudder. For neutral trim, the magnet and rudder free float and only when the control stick is moved does the rudder swing left or right. Because of this delicate control impulse, I would not recommend the Tiger Moth for outdoor flying where there is any kind of wind present. Indoors, the model performs like a free model with plenty of built-in stability and positive control response.

When it comes to the model’s assembly, it’s interesting that the LiPo battery pack, the lower wing, the four interplane struts, and the landing gear are all held in place with small, powerful magnets. The struts are made of thin plywood with magnets at either end, while the cabane (wing-center section) struts are made of stiff wire fitted into plastic receptacles. Since the majority of hard landings will stress the landing gear and lower wing, this is a well-thought-out arrangement to minimize damage. A plus of using the magnet attachment points is that alignment of the parts is automatic. I really like the “engine compartment” panel that’s also attached with a magnet. You can easily get inside and see the power system and onboard 3-in-1 control unit.

It is always a pleasure to fly micro RC indoor flyers. With extremely lightweight airplanes, there’s very little kinetic energy built up during flight, so should you run into something, damage is usually very slight and certainly nothing a little bit of 5-minute epoxy or foam-safe CA glue can’t mend right on the spot. With 2.4GHz radios, you can also fly with several other like-minded RC pilots and that’s when the fun really gets going.

PILOT’S DEBRIEFING
Flying this nano-micro indoor RC plane requires a fine touch on the controls. You don’t want to bang the sticks around. Takeoff runs from a smooth gymnasium hardwood floor are easy and I like to keep my control inputs to a minimum. Try adjusting your throttle so that when you add rudder, the model just starts to lose altitude from the additional drag. With neutral rudder, it should fly level and maybe even climb slightly. You can save elevator control for quick control corrections so you don’t run into a wall or fixed obstacle.

The charger for the 1S LiPo flight pack is built into the side of the transmitter case.

CHARGING AND BINDING
A nice feature is that the on-board flight LiPo pack can be charged with a built-in charger in the transmitter. At the lower left corner of the radio is a compartment with the charge lead and plug stored inside. Simply plug the battery in and the yellow “charge” LED indicator lights up on the face of the transmitter. When the battery is fully charged, the light goes out. Out of the box, the LiPo comes partially charged, so the initial charge took less than 10 minutes. A full charge after a flight can take anywhere from 35 to 50 minutes.

A biplane design from the 1930s, the Tiger Moth was the creation of Geoffrey de Havilland and was used by the Royal Air Force and other air services as a primary trainer. It was used until the early 1950s when it was replaced by the de Havilland Chipmunk. Many of the well-used trainers became available to civilian market as surplus aircraft, including the one that performs on a regular basis at the Old Rhinebeck Aerodrome and museum in Rhinebeck, NY. Part of the Aerodrome’s Golden Age collection, this particular red and silver pioneer is a 1934 vintage and is powered by a 120-horsepower Gipsy Major engine. It has a wingspan of 29 feet, 4 inches and a top speed of 109mph. Privately owned by longtime Aerodrome pilot, Bill King, the D.H. 82 Tiger Moth is often the winner of the Aerodrome’s aerial competitions like the Balloon Bust and the “Delsey Dive” toilet paper cut!

To learn more about the Tiger Moth and the Old Rhinebeck Aerodrome, go to oldrhinebeck.org/ORA/dehavilland-dh-82-tiger-moth.

With the RTF version, no binding is required. Simply turn on the transmitter and then after it sounds three audible beeps, you plug in the airborne pack under the model between the landing gear legs. The magnet automatically positions the battery pack in the proper location for correct CG balance.

If you have the WOT version, you will have to bind the model to your transmitter. For the 3-channel M3LPA radio, switch on the transmitter and connect the flight battery to the model. Next, press and hold the elevator-up trim button, then press the right rudder/aileron trim button. The radio will emit a series of beeps indicating it has entered the binding/link mode, and then you can release the buttons. The binding process is complete when the rudder and elevator move back and forth briefly and the transmitter stops beeping. The instructions also have the binding procedures for the other M4LPA and M4MPA Ares radio systems.

Out of the box, the Tiger Moth is ready to fly in about 15 minutes. There are even “AA” batteries for the transmitter.

If you are looking for a neat, compact RC indoor flyer, the Ares Tiger Moth 75 is an excellent little performer. It has undemanding stable flight characteristics and it is ideal for flights in a medium sports arena or high school gymnasium.