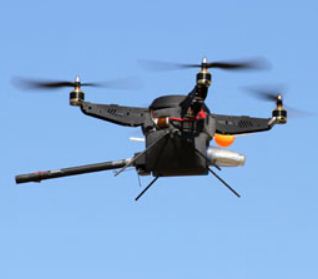 Check out this recent story by David Hambling that we found on the  Popular Mechanics website!
A camouflage quadrotor armed with a machine gun zips around a test range, destroying targets and setting dummies ablaze.

By now, most of the nearly 11 million people who’ve seen the YouTube video know it’s a fake. There’s no armed Russian quadrotor drone; the video is a bit of CGI trickery, a viral advertisement for the next Call of Duty game. But real-life weaponized quadrotors may be a lot closer than you think, thanks to a project undertaken by Marine Corps Maj. Derek Snyder at the Naval Postgraduate School in Monterey, Calif.

People have previously tried arming bigger unmanned helicopters, but Snyder was interested in a tactical counter-sniper weapon. Say a platoon is pinned down by sniper fire. Soldiers can locate the shooter with a sensor like the Individual Gunshot detection system, but they still have to deal with the threat. Snyder aimed to develop a small drone that a soldier could pull out of a backpack and send off to take out the sniper, all without leaving cover.

Snyder experimented with both fixed-wing and helicopter-type drones, using off-the-shelf hardware. In the end he used two quadrotors: the $8000 Pelican made by German outfit Ascending Technologies and the Taiwanese GAUI 330X, which costs just $400. Each has a payload of more than a pound and could be fitted with a camera and transmitter to relay video to the operator.

Snyder says quadrotors have advantages over small fixed-wing drones like the Raven, which might also be armed for this type of operation. A quadrotor is much more accurate in firing because it can hover in place, and it can be launched by an operator staying down behind cover. Fixed-wing drones are hand-launched and the operator needs to be standing or running (the Raven needs a clear hundred-foot space.)

The next step was to go on the attack. One option: load the quadrotor with an explosive charge and crash it into the target, kamikaze-style, like the new Switchblade drone. But a weapon that can only be used once has obvious disadvantages. Instead, the drone could drop a grenade, but this tends to be inaccurate and risks harming bystanders. So Snyder decided to arm his drone with a shotgun (which he simulated with a paintball gun for development purposes.) 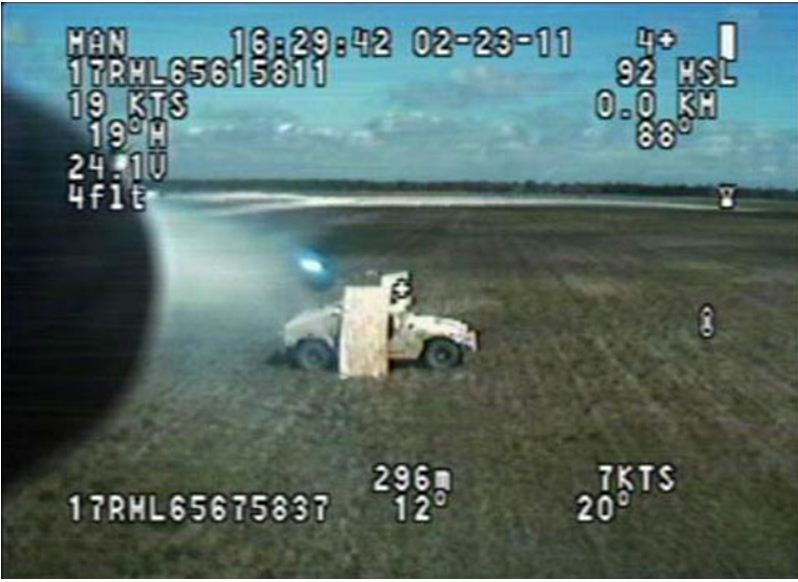 “The use of a paintball gun was merely to keep the red tape to a minimum,” says Kevin Jones, research associate professor in the Naval Postgraduate School department of Mechanical & Aerospace Engineering, who acted as thesis adviser on the project. “The paintball round is actually more challenging in that the range and flight characteristics of the paintball round are such that a bullet will almost certainly be more effective.”

Because paintball guns usually weigh around 3 pounds, Snyder stripped one down to its basics to fit it on the quadrotor. He replaced the heavy high-pressure air tank with a small CO2 cartridge, and added an accurate carbon-fiber barrel and a radio-control trigger. Still, aiming this thing was a challenge. From a range of 80 feet the paintballs struck around the human-size target, sometimes missing by inches. However, this would be close enough for the sniper to be caught in part of a shotgun blast, even if the blast was not lethal.

Jones says, “We also experimented with a nonstabilized gimbal for the gun on a quadrotor, using a second operator to steer and fire the gun. With an autonomous quadrotor, the operator could essentially park the vehicle in the air and then just focus on aiming the gun and taking a shot.”

“The priority would not necessarily be to kill the sniper, but to gain his attention long enough to change the equation in favor of the victim,” Snyder notes in his report. That also goes for the fact that the hovering quadrotor might be visible and draw fire if it approaches an enemy in broad daylight. The aim is to distract or alarm the sniper, and seeing one of these homing in should change his priorities.

Now Snyder had Jones think about arming the drone for real, by finding a suitable lightweight shotgun. Australian outfit Metalstorm, for example, makes the Maul, claimed to be the lightest 12-gauge shotgun in the world, at under 2 pounds. It has a five-shot capacity, no moving parts, and it is fired electronically. The company has already tested it successfully on a small unmanned helicopter.

Shotguns aren’t the only option. “While the spread of a shotgun round is enticing, the reduced range and the size and weight of shotgun rounds may be a disadvantage due to a necessary reduction in round capacity,” Jones says. “An SUAS [Small Unmanned Aircraft System] armed with many single-shot rounds may be much more effective… it could distract the opponent for a very long time, allowing our troops to maneuver on them.”

Jones says the research so far has been proof-of-concept. “The next stage would be to organize a small group of suitable weapons and SUAS manufacturers along with potential end-users, and identify what can be done now, and what we need to do to move forward,” he says.

Unlike Predator drones, armed quadrotors will not require enormous engineering capacity to develop—As this project shows, they might be assembled in small workshops using largely off-the-shelf components. So expect to see more of these sinister armed drones. The next Call of Duty is set in 2025; armed quadrotors will be here well before then.

Here’s a link to another great UAV story on Popular Mechanics: Drone  Debrief:  The Good, the bad and the ugly in UAVs