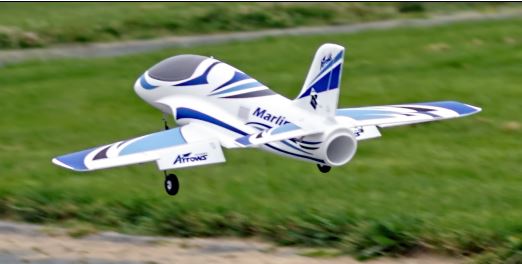 Arrows RC has announced a new electric ducted fan 64mm trainer named the Marlin. This is the first electric EDF trainer in its class to be equipped with flaps.  All parts for the Marlin are stocked in the USA and available through either HobbyZone.com or ArrowsRC.com  The price is $159.99.

Designed with the beginner to intermediate pilot in mind, this plane has a more robust fixed landing gear than most, to handle bumpy landings. More importantly it is the only plane in its class to have flaps to shorten takeoff, and to make approaches and landings more like those of a high wing trainer. The 3150kV motor combined with a 40 Amp speed control, and a powerful 64mm 11-blade EDF, ensure plenty of power for takeoff and maneuvers. The fan sounds like a real turbine.

This plane basically has eight screws and some servo connections to complete assembly. No glue is necessary, and because we use 8 servos we are not running a lot of control rods around. Even the nose wheel has it’s own servo. Flap and aileron connections are made with ball linkages, for greater strength at higher speeds. A latch type canopy makes in flight canopy loss a thing of the past.

If you are looking for a first EDF to try, or are looking to move up to a EDF without spending a bundle, this plane is for you. 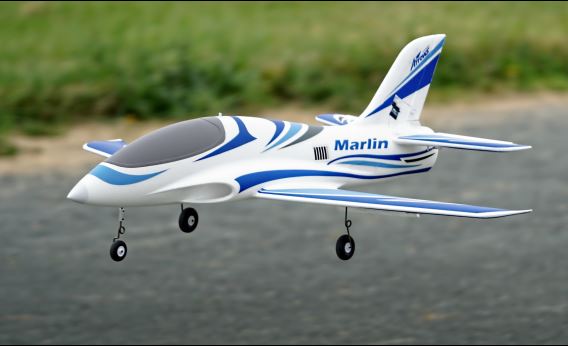