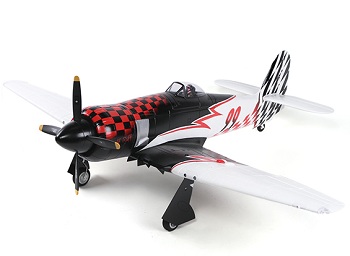 The Hawker Sea Fury was the last propeller-driven fighter to serve with the Royal Navy and also one of the fastest production piston-engine aircraft ever built. Developed during the Second World War, the Sea Fury entered service two years after the war ended and proved to be a popular aircraft with a number of overseas militaries, also seeing service during the Korean War in the early 1950s. Since that time many airframes have survived through the efforts of private owners and have enjoyed a long post-military career at air shows, with heavily modified versions participating in the annual Reno Air Races in the Unlimited Class.

Avios brings you a exemplary example of the legendary Hawker Sea Fury Reno Racer known to fans the world over as Riff Raff. A brilliant no-glue design arrives with all electronics pre-installed, just needing a battery and radio system to complete. The stunning colors of Riff Raff means this model is sure to please both in the air and on the ground. Appearing annually at the famous Reno Air Races with the number 99, Riff Raff has been pleasing crowds since 1998.

The all EPO molded foam replica features functional split flaps, retracts with gear doors and sequencer, LED lights, and scale 4-blade propeller. For the true speed freaks, you can run standard 2 blade sport propellers for optimal performance. With quality being most important to us here at Avios, each model is individually checked at the factory to make sure it meets stingent quality standards. The Avios 1200mm Riff Raff Sea Fury EPO Racer is no exception. Since it is a plug and fly model, most of the hard work has been done for you. The whole model can be assembled and flight ready in about an hour!

Go fast and turn left, thats the pylon racers mantra. The Avios 1200mm Riff Raff Sea Fury can do, and does. The slightly larger size can handle wind and rougher fields easier than small parkflyer sized models, plus is a little easier to handle.

Riff Raff is sure to be the hit at the field. Speed, good looks, ease of assembly make the Avios 1200mm Riff Raff a no brainer, you need one.