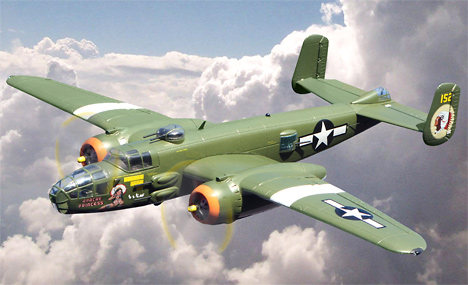 B-25 Apache Princess from Hobby Lobby

This receiver ready ARF is a must have!

Check out these great features:

Retracts with sequenced gear doors that deploy at scale speed are just the beginning. The B-25 Apache Princess also comes with navigation lights, counter-rotating props, two brushless motors, two brushless controllers, ten pre-installed servos, and a 3-cell lipoly battery pack. Constructed from tough EPO foam the B-25 is an airplane that will quickly become a favorite flyer. The ground handling is solid, the wide landing gear make takeoffs and landings a breeze.

The retractable landing gear with sequencers on the gear doors is a first in this category of airplane. They are completely pre-installed and setup, you only need to plug in some extensions during assembly. You have to see the landing gear in operation for the full effect. When the retract switch is activated after takeoff, the gear retracts at a scale-like speed and then the gear doors close. When setting up for landing, flip the switch again and the gear doors open fully, followed by the gear coming down.

The counter-rotating 3-blade propellers cancel out torque and make for very balanced flying performance. The 3-cell 2200 mAh LiPo battery is located under the canopy battery hatch for quick change. A complete photo-illustrated instruction manual is included showing each step including the balance and control throw information. Assembly should only take a couple of hours; most of the work is pre-done for you.

The B-25 is a joy to fly; its flying speed is about scale. The stall is slow and very controllable; this is where the counter-rotating props are a big advantage. Landing speed is slow, and a light landing is easy to accomplish. The working rudders allow you to slip the model into a landing if you like. Requires a 6-channel transmitter, receiver, and a lipo battery charger. 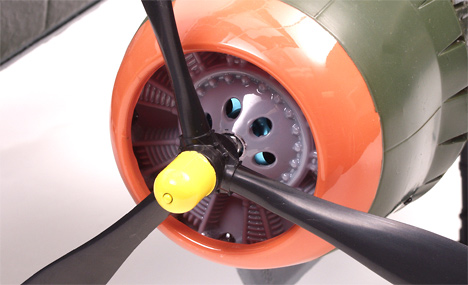 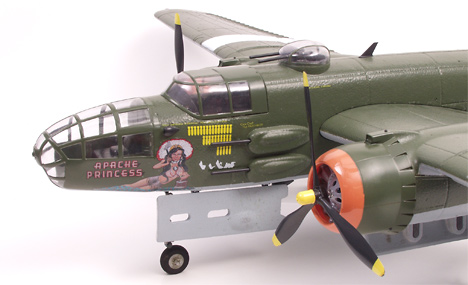 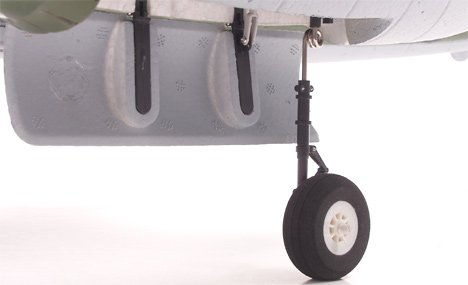 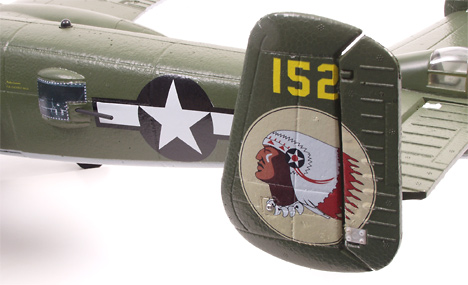