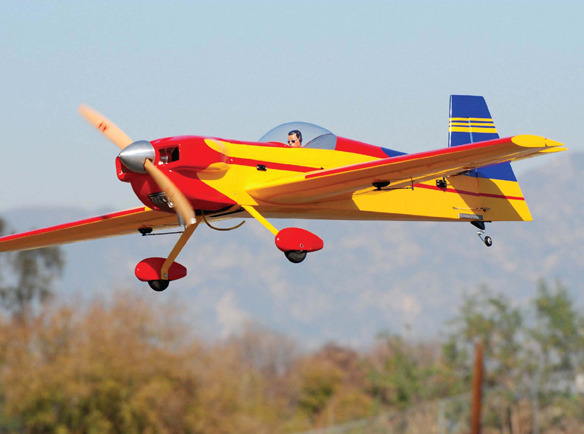 Take the next big step into giant-scale aerobatics with this affordable, high-performance IMAA-legal sport scale model

Though at the upper limit of the power range the DA-50 gas engine fits nicely on the firewall. The DA Pitts-style muffler is also a good fit.

AS YOU THUMB THROUGH the pages of Model Airplane News looking for your next project, you will see numerous aerobatic models of Extras, Edges and Caps designed for 50cc gas engines. This size aerobatic model continues to grow in popularity because these models have most of the performance characteristics of the bigger 100 and 150cc models but they are not as pricy and are easily transported in the family minivan. This Cap 232 by BH Models and distributed by Hobby People is a good and economical addition to the family of 50cc aerobatic models.

The airframe of this Cap is very light. It is constructed entirely of good-quality balsa and plywood and every bit of material not necessary for strength or shape has been eliminated. When I first looked at the airframe’s construction I wondered if the model would stand up to the stresses of a strong 50cc engine and high G maneuvers such as snap rolls. While I recommend good throttle management, this Cap is strong enough to handle any aerobatic maneuver you want to try. The model is also well constructed. Overall, the airframe of this model is very good.

Here you see some servos, the battery pack and part of the fuel tank. Nice fit.

The model arrived in a single box and the major components were well packed to prevent damage. The ailerons, however, had significant warps, but the distributor quickly sent new wing halves and ailerons, and the replacements were fine. The kit is quite complete and just about everything you are going to need, except adhesives, is included in the box.

The model is covered in a striking yellow, red and blue color scheme that is very visible in the air. As with most ARFs, you can plan on spending a few hours with a heat gun shrinking the wrinkles out of the covering. I would also recommend that you use an iron to make sure the edges and the trim are completely affixed. Be careful as you perform this task as the model is covered in Oracover, which requires relatively low temperatures to activate the adhesive and shrink. While the kit also includes a set of decals, I found that they did not match the colors of the model so I declined to use them.

The fiberglass cowl included in the kit is beautifully painted to match the color scheme of the model and mates very well with the fuselage. The cowl is quite large so you will find that it will conceal just about any engine you might select. The cowl is affixed to the fuselage with four wood screws. I later found that the cowl vibrated excessively when my DA 50 was running, so I later added two more blocks and screws to the top of the cowl to dampen this vibration. You might consider this during the construction phase.

The control surfaces of the model are attached using CA hinges. While I have never heard of a hinge failure, I do not like CA hinges in large models. I replaced the provided hinges with 1/4-scale piano-style hinges that can be purchased at most hobby shops.

The remainder of the hardware is excellent. You might find the assembly of the pushrods a little different. The model uses carbon-fiber rods that are affixed with CA to a metal connector, which is threaded at one end to accept the clevis. This is the first time that I have used these materials to construct pushrods so I decided to test the assembly by locking the clevis in a vise and pulling with all my strength. The assembly held in the vise and has also held on the model. This is a great way to assemble pushrods and the carbon-fiber rods will not bend and flex like music wire.

The aileron and elevator control horns are a unique assembly of bolts and two caps that recess into drilled holes in the control surfaces. As the holes were a little larger than the bolts, I was a little worried that the assembly might eventually elongate the holes and wobble. To avoid this I filled the holes with polyester glue before assembly. The glue expanded as it dried and formed a very rigid foundation for the control horn. In hindsight, I should have replaced the bolts provided by the manufacturer with longer (say 2-inch or so) bolts. This would have lengthened the horn moment and made eventual adjustment of control surface deflection easier.

The 50cc gas engine resulted in a nose-heavy balance requiring 12 ounces in the tail to correct. However, due to the long tail moment of this model I would suspect that the use of a smaller, lighter engine such as a 1.6ci glow engine would result in the opposite problem.

IF YOU ARE LOOKING FOR A MODEL TO STIR UP THE AIR, GIVE THIS CAP SOME CONSIDERATION

Anyone who has successfully assembled a few ARFs should have no problem with this model. Plan on needing 15 to 20 hours for assembly. If you choose to install a gas engine with ignition and cutoff switches, it will add 10 or more hours to the process.

The DA 50cc gas engine provides more than ample power. The model lifts off very quickly and climbs with authority.

I had set up the model using the recommended throws and found them to be very sensitive. I am sure that 3D pilots will love it, but for precision aerobatics the response was too quick. This was quickly cured by adding about 45-percent expo to the ailerons and 25-percent expo to the elevators. Once the model was trimmed and the controls tamed, the flight characteristics were good. Rolls are axial and require very little elevator input to maintain altitude.

STABILITY This model is very solid through most maneuvers and at most speeds. I always felt like I had control of the model.

TRACKING The Cap goes where it is pointed. Inverted flight is easy and almost no elevator input is required. The rudder on this model is very effective but it does induce some roll in the opposite direction. I am sure that I will be able to program this tendency out of the model. I was surprised to see that when given full rudder deflection, this model did not try to tuck its nose.

AEROBATICS This model is capable of all IMAC-type maneuvers. With a good 50cc engine and the control throws set per the instructions the model performs very well. I was particularly impressed with the Cap’s spin. The stall portion is very predictable and straight ahead. As the nose drops below the vertical, add rudder and aileron and the model spins with authority. No opposite control is required to stop the spin, just let go of the stick and it stops spinning making it easy to determine exactly where you want the pull-out. I also like the way this model snaps. I usually have trouble stopping snaps in the upright position, but not with this Cap. Let go of the stick and th emodel immediately stops it snap. I love it!

GLIDE & STALL CHARACTERISTICS During the first landing the little voice in the back of my mind was telling me watch out, Caps snap! Well, this is a tame Cap and I easily slowed this model down on approach with no tendency to drop a wingtip. All the controls remained effective all the way down to touchdown. If anything, this model is a real floater. If you do not get it slowed down enough on approach it will easily float the length of your runway.

I am happy with the flight performance of this model. It will definitely be able to compete with the �big boys� in any IMAC type of event. I am also very impressed with the low-speed performance of this model. It can really be slowed down on approach without any loss of control. At higher speeds, the model is very responsive. If you are looking for a model to stir up the air, give this Cap some consideration.