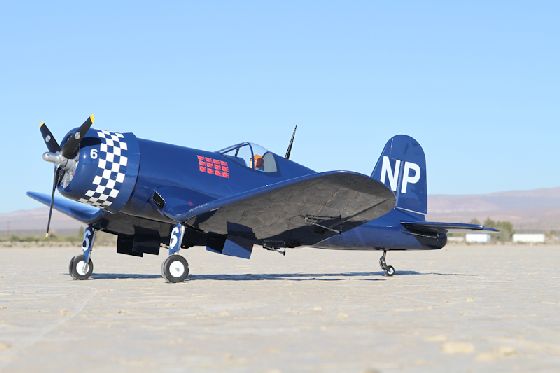 The F4U-1D Corsair, characterized by its gull-wing-shaped wings, is one of the greatest fighter bombers of its time. It could outfight, out-climb and overtake any prop-driven enemy. BH Models has just introduced a fantastic Corsair 120 ARF. I have built and reviewed several BH Models in the past and have come to revere them as top-notch and their Corsair 120 is no exception. When I opened the box and saw all the parts neatly and securely wrapped, I knew I was in for a great building experience. When I removed the wings, tail feathers and fuselage from the box, I saw they were the typical built-up lite-ply and balsa construction and covered in Oracover. However, the quality of the construction is exceptional and the best I have ever seen. The Corsair has twist and turn air retracts with Oleo legs and working gear doors that are already installed for you. Also, the Corsair has scale-looking multi-sectional flaps. In addition, the pilot and canopy are already painted and installed for you. An easy-to-follow instruction manual, a complete metric hardware package, fuel tank, motor mount and decal sheet are also included with the Corsair. For you electric enthusiasts, the Corsair can easily be converted to electric power using the recommended brushless motor power system. The Corsair can be assembled by anyone with ARF building experience. The Corsair should be flown by an intermediate to advanced pilot. The BH Models Corsair is a highly detailed and quality model throughout and replicates a variant of a F4U-1D that operated in the Pacific during World War II and later in the Korean War.

The BH Models Corsair is expertly built and covered in Oracover. Recently, I built and covered a .60-size Corsair in a popular covering. I thought it came out better than most, but it pales in comparison to the BH Models Corsair. The BH Models Corsair was designed to be powered by a 1.20 4-stroke or by an electric motor power system (EP).  The tail feathers need to be glued to the fuselage and the flight surfaces’ cloth-type hinges need to be secured in place with thin CA. All the flight surfaces already have holes drilled in them for the included control horns. The elevator and rudder pushrods are already installed in the fuselage as well as cut-outs for your servos. A well-made painted fiberglass cowl is included in the kit. The cowl has a nicely detailed dummy radial engine formed into it. The Corsair’s wing halves are held together by an aluminum spar and two metal screws. The entire wing section is then fitted to the fuselage with two wooden alignment dowels in its leading edge and two plastic screws near its trailing edge If need be, each wing half can be easily and quickly removed for transport. The aileron’s cloth-type hinges need to be secured to the wing with thin CA. All six sections of the flaps need to be secured to the trailing edge of the wing with plastic hinges. Each individual aileron and flap control surface is operated by a servo hidden under a hatch in the wing. The Corsair’s main landing gear and scale-looking gear doors are already installed. The main gear is an aluminum air up/ air- down retracts with functional Oleo struts. Cutouts and hardware have been provided for you to install the pressure tank, control valve and servo. Just use the provided connectors, fill valve and tubing to finish the air system and you’re ready to go. The Corsair’s tailwheel is a well-made spring suspension piece that is connected to the rudder, for steering, by a control rod. The tailwheel simply screws into the bulkhead in the provided cutout in the tail section of the Corsair. You finish the tailwheel installation with a provided cover that completely hides everything. There are four formed and painted plastic pieces to trim and attach to the Corsair. All the parts are of good quality, fit well, and really make the Corsair stand out from all the other manufacturers’ ARFs.

The Corsair was an absolute pleasure to assemble. In less than 15 hours, I had an absolute beautiful masterpiece that I could not wait to fly. The Corsair is a stunning eyecatcher and draws many positive comments. At the field, it is easy to track in the sky and fun to fly. Once again, BH Models has produced another, beautiful, quality airplane that I am proud to own. The BH Models’ Corsair is truly an excellent value for any warbird enthusiast and I highly recommend it.

Stability: On the ground and in the air, the Corsair is rock solid and handles well at all speeds.

Tracking: Once trimmed, the Corsair flew hands off from horizon to horizon. Be sure to use a touch of rudder, coordinated with the ailerons, to make your turns look better.

Glide and Stall Performance: The Corsair glides very well and when pushed to a stall, the Corsair will simply fall forward. Recovery is as easy as point the Corsair’s nose down, apply power, and pull away. The Corsair did not show a tendency to drop a wing during the stall.

The BH Models Corsair is an absolute winner. It’s a great-flying and fantastic-looking warbird. The outrunner setup that I used provides plenty of power and more than enough runtime. I am very pleased with the Corsair and highly recommend it to any enthusiast looking for a top-notch warbird.

The F4U-1 Corsair went into production in July of 1943 and was manufactured by the Chance Vought Company. The Corsair served with the U.S. Navy, U.S. Marines, Royal New Zealand Air Force, and the Royal Navy’s Fleet Air Arm. The Corsair quickly became the best carrier-based fighter bomber of World War II. To keep up with the demand for the Corsair, the Vought Company had to enlist the help of the Brewster Company (F3A-1) and the Goodyear Company (FG-1). There were 12,571 Corsairs produced and production of the Corsair ended in 1952. The Corsair was known by many nicknames: “Bent-Wing Monster,” “Ensign Eliminator,” “Bend-Wing Bird,” “Hog Nose” and among the Japanese ground forces as the “Whistling Death.” The Corsair was powered by a 2,000hp Pratt & Whitney R-2800-8 radial piston engine. This gave the Corsair a top speed of 420mph at 20,000 ft. It had six 50cal. Browning Machine guns mounted in its wings. The bent-wing design of the Corsair was necessary for its huge prop to clear the ground while providing for a short stout landing gear. The huge prop was necessary to take advantage of the horsepower created produced by the Pratt & Whitney engine. The Corsair was reputed as a fighter but, was also invaluable as a bomber. The Corsair could carry eight 5 in. rockets or two 1,000 lb. bombs under its wings. Additionally, it could carry two napalm tanks and one drop fuel tank. And for nighttime operation a radar dome could be fitted in the Corsair’s right wing.

The Corsair is easy to convert to clean, quiet, electric power. I started by fastening the Himax Brushless Outrunner to the Corsair’s firewall using a typical, adjustable, aluminum, motor mount designed for electric motors. Corsairs are typically nose-heavy, so I set the motor as far forward as the back of the cowl to the firewall fit would allow. I removed the soft balsa sheeting from the bottom of the motor box to allow air to flow into the fuselage. I mounted the speed controller under the motor and hooked up all the leads. I trimmed away some of the lite-ply formers where the fuel tank would normally go and added my own lite-ply battery tray. I added Velcro to the battery tray along with a Velcro strap for extra securement. I put Velcro on the bottoms of the two 5-cell battery packs and secured them in the battery tray. I wired them in series to make one 10-cell pack and connected them to the speed controller. I added six ounces of lead to the top of the firewall to obtain the recommended CG. As a final modification, I cut out three slots in the tailwheel cover to allow air to pass out of the fuselage. The power system I chose will fly the plane at three-quarters throttle comfortably for 8 minutes with 2-3 minutes of reserve power left. The system pulls 46 amps at full throttle and makes 1703 watts while turning the 16×10 3blade prop at 7400rpm. The system produces 12 pounds of thrust and will propel the 15-pound Corsair along at approximately 85mph. So I don’t have to disconnect the Corsair’s airlines or wiring every time I change out the batteries, I made a simple stand out of PVC pipe to cradle the Corsair and its detached wing.