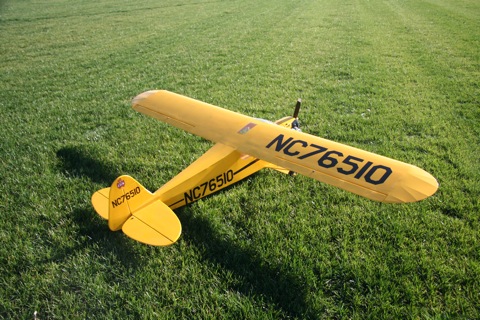 I would bet when William T. Piper put his name on his first J-3 Cub, he never imagined how much a part of Americana he had created. Who is not enamored by the Piper Cub J-3? One buried in your neighbor’s barn may be every bit as valuable to you as a shiny one on the airport runway. BH Models J-3 version of the Piper Cub does everything possible to respect that rich heritage, and for people like me who live vicariously through airplanes, it has earned its place in my RC hangar.

Presented as an all balsa and ply model, covered with Cub Yellow Oracover, BH Models J-3 includes the wing window panel over the cockpit with an operational pilot door, spring-damped main and tail gear and vintage Cub hub caps. BH Models, located in Vietnam, has done an exceptional job of designing a great replica with outstanding instructions, high-quality components and scale-like flying characteristics.

I have flown a lot of Cub RC planes both electric and fuel. Each with character all their own, but as they get bigger, I tend to correlate the investment with flying skill. The J-3 offered through Hobby People is for advanced pilots, but certainly not for advanced builders. The build was easy, so consider this purchase based on your flying experience with tail-draggers in particular. As a high wing, you should expect good stability and handling, and that is exactly what you get with the BH Models J-3 Cub.

BH Model provides one heck of an ARF kit for a 96-inch wingspan J-3. Fiber hinges are installed and await a light touch of CA, servo installations were absolutely perfect in combination with the Cirrus CS704MG Hi-Torque servos, and my installation of the Magnum XL120 RFS 4-stroke Blue Head engine could not have been a better choice. I believe kits, especially ARF kits, should be an exercise in building, not fabricating. In each of the BH Model kits I have built, I have always been pleased with the quality of the metric components and accuracy of the packing. This was exactly my experience with the J-3; absolutely no frustration.

I chose a 4-stroke 120 for the J-3 because I wanted more realistic power and sound. This decision clearly manifested itself under the cowl. I really wanted to hide as much of the engine under the fiberglass cowl as possible. I needed to trim only one side of the cowling and remove only one cylinder head molding. By rotating the muffler, I was able to hide it completely, with just a small exit point on the left side of the cowl. Both the needle valve and choke needed to be extended up and out of the cowl.

The motor mount perfectly fit the Magnum 120 and is rotated slightly. Give yourself just a little more than the 13.5cm spacing from the thrust bushing to the firewall. Use note cards taped to the fuselage to mark off the opening for the Magnum cylinder head, needle valve, choke and exhaust port. I know if you have done this before, you sometimes struggle to get the cowling in place over the installed engine. I found the cowling to be big enough to fit over the engine with just a minimum of finesse.

I was committed on this project to making the switch from the normal 4.8 or 6.0V NiMH on-board battery pack to a 7.4V LiPo. Using a Castle Creation BEC Pro, I easily set the voltage to 6 volts using their USB Castle Link, and with a Power Edge 2100mAh 20c 7.4V LiPo I had plenty of reliable power to operate the five large servos. An MPI arming switch was included instead of a typical exterior switch. This is a very positive method of powering your planes and not much chance of leaving the power on after flight. As an extra benefit to adding a LiPo, I could fly the beautiful J-3 Cub almost all afternoon without worrying about having enough battery power.

You can frame up the J-3 in one evening with no problem. Because the hinges are installed and only need a drop of CA, you can complete that portion of the build very easily. Aileron servos require 18-inch servo extensions since they need to reach the radio in the lower portion of the fuselage. As with any project that requires trimming the cowl and making sure the motor is centered, plan on investing a few of hours getting this correct.

I fly from grass almost all the time. I found the J-3 handled perfectly on the ground with either a soft or hard surface. You will note it is the rudder that steers the J-3, not the tailwheel. In taller grass, power is required to deflect the tail with the rudder, rather than the tailwheel steering the J-3. On a hard surface, this is diminished some, but you do need a little air across the rudder to quicken the turns. The Magnum 120 produces some good torque, but I did not think the J-3 was difficult to handle through the takeoff roll. In a few feet the tail came up, and in about 50 feet you are airborne. Climbout is exactly as one would expect with this classic: slow and steady.

Because I knew how I thought the Cub would behave in the air, I mixed in some up-elevator with the ailerons and some rudder as well. That really paid off in my flights and let the J-3 perform as it should with coordinated turns.

In the air I loved the looks and the controllability. I kept the control on low rates, and with the rudder mix I had really nice turns both tight and wide. The J-3 does roll and loop, but inverted flight requires constant attention to the elevator. That flat-bottom wing produces little in the way of lift inverted. Flybys are just a sight to behold. The big Magnum 120 thumps with a slight bit of exhaust smoke, and seeing the front-seat pilot flying solo is really what it is all about. I was pleased that the motor, as installed, did not change the attitude of the J-3 whether at idle or full throttle. Honestly, I flew most of the time at just about 1/2 throttle and in some steep turns added more throttle to avoid a stall. Stalls were straightforward, but I really had to force them at idle. The J-3 will almost hover in ground effect waiting to touch down. I made ground contact too early a couple of times, and all I did was bump the throttle to lower the nose, and I was ready to settle back down. Landings are great fun.

The Cub will weathervane as you would imagine with the big tail. That is more fun than worry, and you begin to hone your skills at cross-winded landings. Slow flight is outstanding.

>Stability. You expect a stable airplane with a Cub, and you get it with this version. I attribute some of the smoothness in flight to the Cirrus CS704 metal gear servos, but overall, the J-3 is very easy to fly, and with minimal channel mixing you get very scale-like flight.

>Tracking. A poorly designed or installed motor and mount can cause the need for trimming throughout the flight envelope; nothing like that with this Cub and the Magnum 120. From ground tracking to landing, the J-3 is gentle and predictable.

>Aerobatics. The Cub will perform mild aerobatics. Rolls require the addition of more elevator movement than prescribed as the J-3 rolls over. While you can maintain the inverted flight, one needs to be quick o
n the rudder and elevator to keep the nose up getting to and while inverted. Employing a dual rate for these surfaces makes the maneuver easier.

>Glide and stall performance. The glide slope is very good. You don’t need to enter the final with much power, and after you cross the threshold, cutting the power may not get you down to the runway. There are no flaps on a J-3. Slow- speed stalls are rare but obvious, and you can pretty much see them coming. I was able to literally stop in the grass in a few feet with a short throttle bump at the stall.

The range of uses for the Cub is broad in real life. I hate to simply say this is trainer because it has a high wing. It is really more than that with a high-degree classic style and flight, and with the 4-stroke Magnum sound, it’s a real showpiece for anyone’s hangar.

One little thing I really liked was being able to access the electronics from the bottom hatch. I have had several Cubs that required me to remove the wing and struts just to get at simple adjustments. You have so much room in the fuselage cavity to easily install all your electronic gear and perhaps some extras. The Cub is portable if you remove the wing-spar retainer screws, wing bolts and one or two screws under the fuselage to free the struts.

Lastly, I want to add that when I placed the Cub on the CG stand, it was dead-on. I did not have to add any weight, so again, testament to the correct motor, lightweight LiPo battery, BEC and servos for this outstanding J-3 Cub.

·          Accessible hatch under fuselage with lots of interior room

·          Details like the wing window, pilot and instrument panel 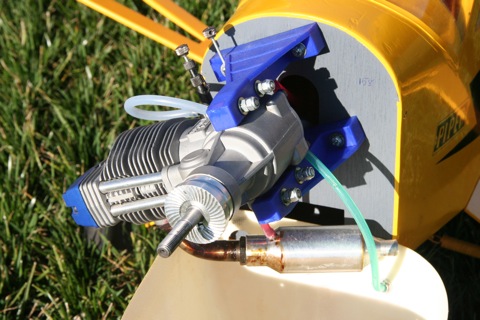 The smooth running Magnum 120 fit with little trimming necessary. The muffler rotates in the cylinder head providing the option of hiding it under the cowl.