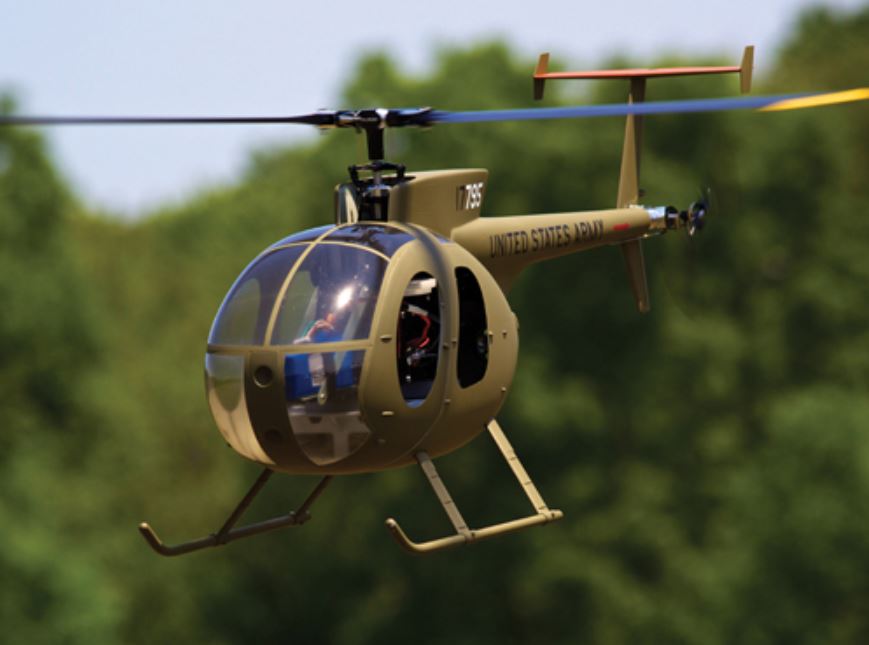 Large-scale helis (“large” in this context meaning anything bigger than 450 or 500 size) have a reputation for being expensive, complicated, and nerve-wracking to fly. The goal of this project was to have a scale heli that would be affordable, simple and fun.

To fulfill these objectives, I looked for a scale body that would be inexpensive, compatible with my existing 600-size machine, and light and fun to fly. Also, while I wanted a larger heli, it needed to be easy to transport. It wasn’t a hard search. Century Heli (centuryheli.com) imports Funkey’s Hughes 500D, a remarkably light .50-size nitro body that is quite suitable for electric power. While available pre-painted, I chose the unpainted option, which was a bargain at under $190 with free shipping no less! 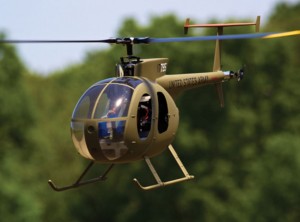 The Funkey MD-500D, available in the U.S. through Century Heli, is a good example of an affordable but impressive 600-size scale bird. The glass work is very light, making it a natural candidate for an electric conversion. Finished all-up weight is less than 10 pounds, so the big machine flies with authority. (Photo by John Kauk)

The Hughes 500D was a good choice for several reasons. First, the roomy body would make installation and maintenance of the mechanics easy. Second, the straight tail boom meant that I could use the stock torque tube tail on my 600 with no mods. Third, the total weight of the body with landing skids was a svelte 27 ounces, which I knew my heli would handle with ease. Finally, I have a soft spot for the “Killer Egg,” which has been in production for nearly 50 years.

Please note that Century imports several other bodies that fit these same criteria, including an Augusta 109, Ecureuil AS350, Bell 222 and the ubiquitous Jet Ranger. All of these would make good choices for a low-stress scale bird.

Because the goal for this build was a fun, low-stress scale bird I could fly every weekend, I opted to keep things simple: no detailed interior, extra surface detail, or 4-bladed head.

The body comes packed in a very stout carton that should stand up to any kind of shipping abuse. Upon opening the carton, I found a second equally stout carton nestled inside; this is one well-packed kit! The unpainted version is primed in the mold, with just a little filling and sanding needed along the parting seam. I had to add a coat of lacquer-based primer to get my Model Master enamel paint to bond acceptably.

The assembly steps are brief, and the kit includes an excellent photo-illustrated manual that clearly explains each step. Because it’s designed for nitro power, the nose is intended to be secured with screws. To simplify battery access for my electric conversion, I replaced the screws with pairs of rare earth magnets purchased from AEC Magnetics, a local industrial supplier.

Installation of the clear windshield is the one step that requires care. After trimming the sections for a precise fit, I then masked them off inside and out to make sure no glue got where it didn’t belong. It’s important to remove all primer on the fiberglass glue flanges, as the adhesive bonds much better to bare fiberglass. I used Bostik clear general purpose adhesive, applying a light film to both surfaces and allowing it to dry before applying a fresh bead to the fiber-glass and setting the windshield in place. This worked really well, and the glue joints have held up great.

I eventually plan to finish my heli as a Vietnam-era OH-6A “Loach,” with a V-tail in place of the supplied T-tail. Because of this, I chose to move the tail rotor to the left side of the boom and to reverse the main rotor for scale CCW rotation. Because my 600 is outfitted with the excellent BeastX MicroBeast flybarless system (beastx.com) and Align flybarless head (alignrc.com), reversing the mechanics was quick and painless.

For added visual impact (and because camo helis are hard to see in overcast conditions!), I ordered a lightweight LED nav light kit from RC-Lights.com. The nav lights are controlled by a nano electronic switch from Hansen Hobbies (hansenhob bies.com) so I can turn them on and off in flight.

Next up, I installed the mechanics in the body. The supplied manual is outstanding and covers just about every detail needed for a successful install, so I won’t explain every step here.

My first flight attempts with the OH-6 were not successful because minor vibrations in the mechanics resonated in the scale body—particularly the T-tail—making it shake so badly it would literally eject the canopy. These vibrations had been present all along, but they weren’t a problem in the heli’s previous pod and boom incarnation. This launched me on a mission to reduce vibration to the absolute minimum.

During this debugging process I received invaluable advice from trusted experts Mike Trueblood, Tony Iannucelli, and Model Airplane News‘ own heli expert Paul Tradelius. Never be too proud to ask for help from fliers you respect and trust; helis are complex machines, and a trusted friend may see something that you missed.

Starting with the most obvious, my war on vibration included rebalancing the rotor blades with greater care than before and checking run-out on the main shaft. I then got into finer details like checking vibration on the motor (an out of balance outrunner motor can vibrate more than you’d think) and checking that the main and autorotation gears were absolutely true. In the tail boom, I moved the support bearing off-center so that the two halves of the torque tube wouldn’t resonate, and I rechecked run-out on the tail rotor shaft. These improvements all helped, but the biggest single improvement came when I replaced the carbon-fiber tail boom with a plain old aluminum boom. Even in cases where a carbon boom may be stiffer, aluminum booms tend to have greater torsional stiffness, and this was enough to keep the T-tail from resonating. With the T-tail rigidly supported, vibration was no longer a problem, and the Loach flew beautifully.

There are two lessons here. Eliminating vibration and run-out on scale heli mechanics is generally much more critical than it is on a pod and boom heli. Also, when stamping out vibration, seemingly small wins can add up. ‘ e great thing about an electric heli is that with these problems fixed, I can expect this big bird to fly reliably for years to come.

With the build essentially complete, I logged a few short flights on the Loach in primer, and the machine really performed well. With the heli programmed for a modest 1,600rpm head speed, performance was crisp and scale-like, and it did not handle at all like a “heavy” bird. Satisfied that everything was working properly, I pulled the mechanics back out of the body (literally a 10-minute operation) and painted my heli in the markings of a 101st Airborne OH-6A. I drew the masks for my markings in AutoCAD and had them cut by CallieGraphics.com. For 20 years I’ve hand-cut the frisket film for painting my airplanes and helicopters, but Callie’s CNC cutting is so good, so fast, and so affordable, that I’ve started using her for nearly all my painting projects. The markings were applied with my trusty Paasche airbrush, and then the entire body was clear-coated with matte lacquer.

With the paint barely dry, I slipped the mechanics back inside and raced off to the field to fly the Loach for real. Here I encountered the only real obstacle on the project; the finished scale body had a resonant vibration issue that made it unflyable. It took some careful work and advice from trusted experts to fix this issue, but once I had it corrected, the finished product was everything I’d hoped for. After only a few flights, I’m already very comfortable flying this beauty, and I look forward to campaigning it at scale gatherings.