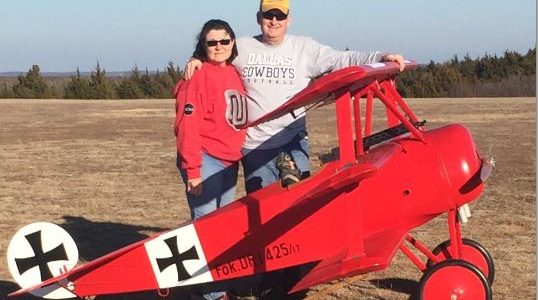 Many scale competitors who’ve flown at Top Gun, know Bill Holland as the Chief Judge for the scale invitation, but he is also a very accomplished and experienced scale model builder and flyer. His newest project is this amazing 50% scale Fokker Dr.1 Triplane and it is a work of RC art! 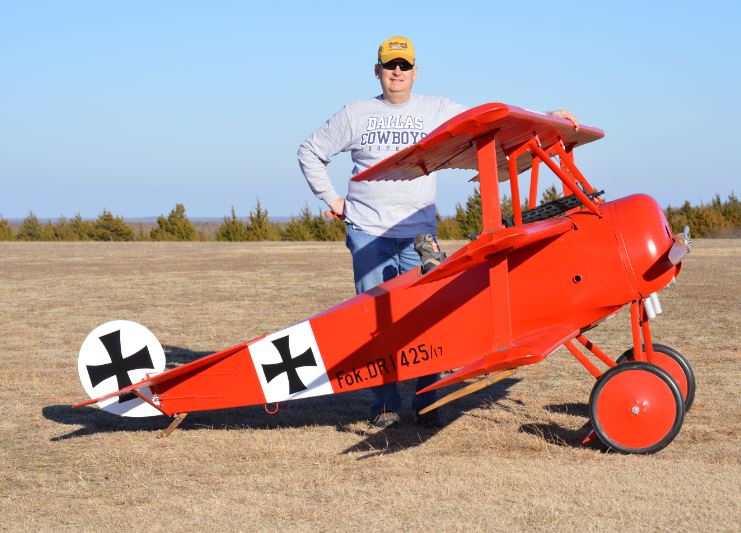 Bill enlarged Glenn Torrance 1/3-scale plans increasing them to 1/2 scale and Glen then provided a very a short kit of ribs, cowling and metal components. The story of this build started while attending Dawn Patrol 2011 in Dayton, OH. 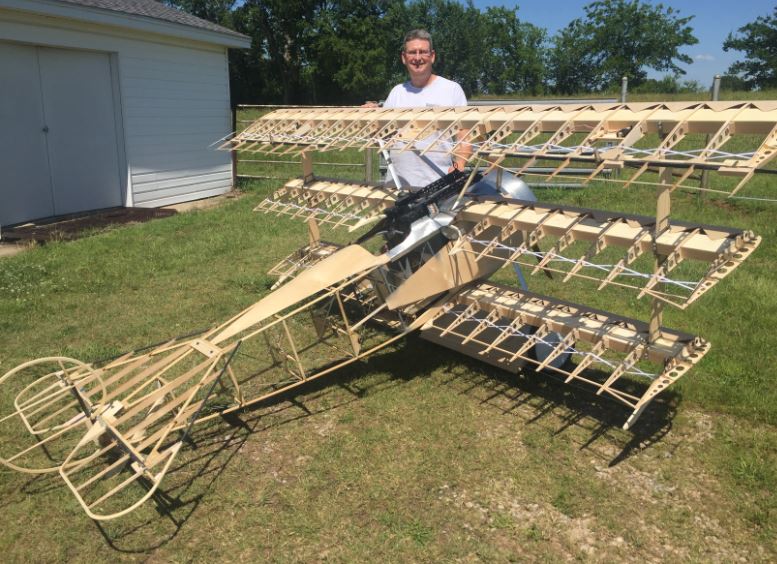 Hardware:  All hinges are scale and homemade for elevator, rudder, and ailerons.  Controls use scale pull-pull cable setup. 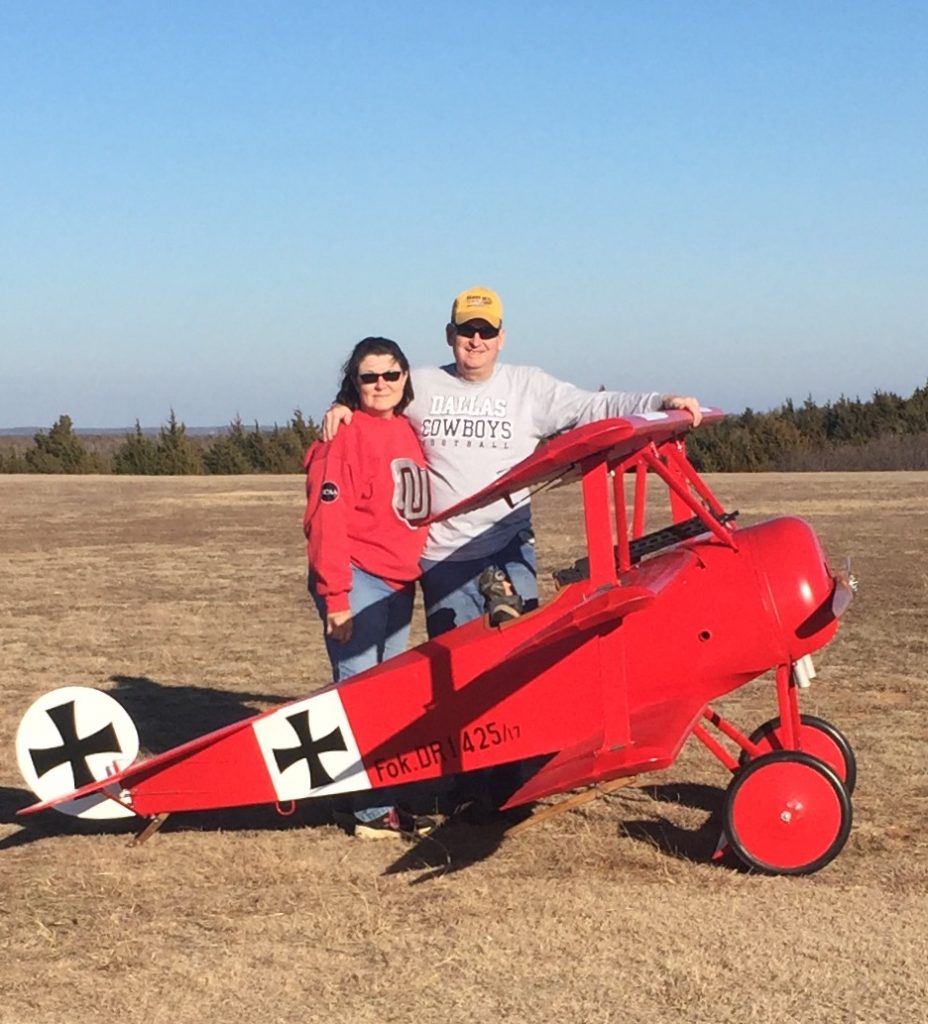 Color Scheme: 425 / 17 that was flown by Manfred Von Richthofen. This scheme has the original iron crosses from initial factory paint. Late March 2017 the crosses were changed to the straight Balkenkreuz design. He was shot down in this aircraft April 21, 1918. 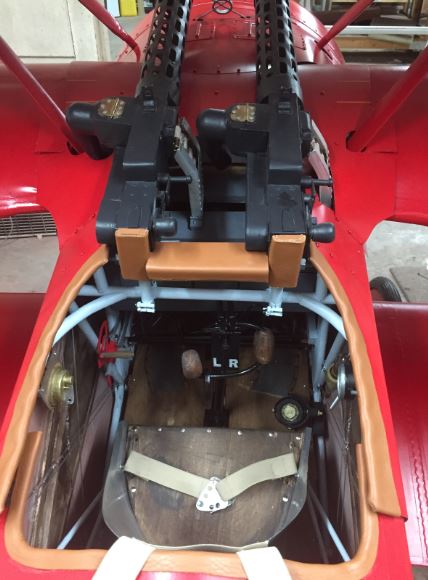 I used over 420 feet of string for simulated rib stitching per full scale. Spandau guns x 2 were modified from the 1/2-scale Balsa USA kit.  All cockpit interior to scale and has full instrumentation. There is 140 feet of 3/64 braided wire with 40 turnbuckles in the fuse as the full scale for strengthening. Trailing edges of all wings are wire (19 ga.) just as full scale to provide the scallop appearance after fabric contracts. 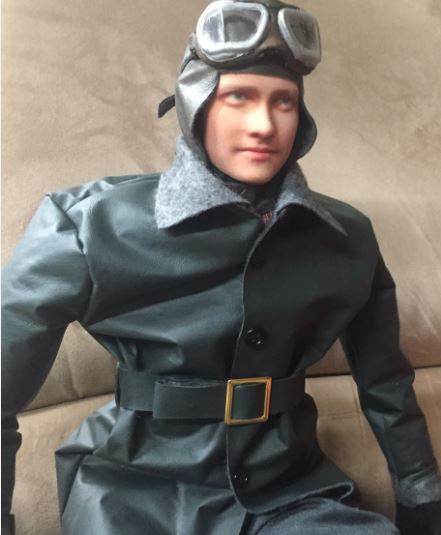 The pilot is one of a kind. Head was custom made by Lyle Vasser of Best Pilots using actual photos of Von Richtofen. Lyle developed 3D images based on his actual measurements. Von Richtofen was 5’ 7” and weighed 147 pounds. The ½ scale head was made using a 3D printer. He consulted with family members on Von Richthofen to verify the resemblance of photos and completed head to reinforce accuracy. His internal skeleton was made to scale with PVC pipes and light plywood.

My wife Sharon made his body and all the clothing including the leather flying helmet and jacket.  He is wearing toddler 5T boots.  Cowling is aluminum complete with all the rivets. The fuselage is jig constructed from ½ in 8 foot Poplar dowels. The top and bottom wing are one piece and the mid wings plug into a rectangular spar. The fuselage top behind cowling to the cockpit is made from light weight steel flashing from your local hardware store. The dummy radial is all scratch built from basswood over a fiberglass tube attached to a plywood crank.  Axe handles on bottom wing and tail skid all built from birch.  The sub wing has bungees on axles as full scale. 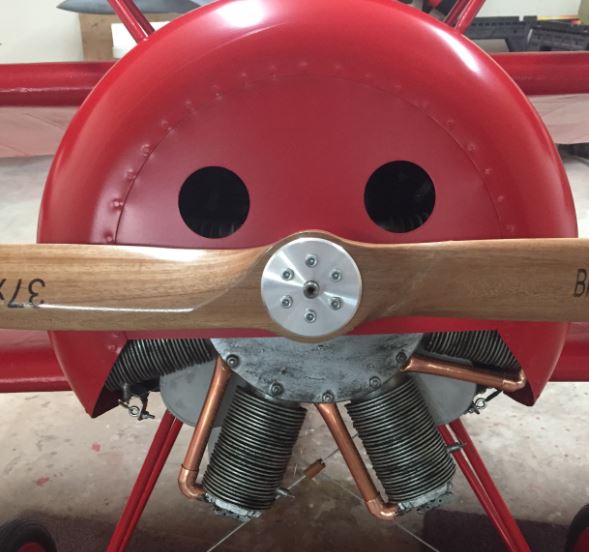 Bill also wears a few other aviation hats. An Air Show Boss and Demo Pilot for full-scale airshows, Bill started building and flying control-line model aircraft at the age of 11. He has been actively flying RC aircraft for the past 32 years, and he holds an FAA pilot certificate with an instrument rating since 1988.

Bill is the AMA Associate Vice President for representing Oklahoma.  He has an extensive history competing in both scale and aerobatic competition over the past 30 years.  He is also a certified Contest Director and Large Model Aircraft Inspector.  Bill has directed numerous RC regional, national, and international scale competitions.  He has been the Chief Judge for Top Gun Invitational the past 22 years in Lakeland, Florida.

Bill’s day job spans over the 40 years in medicine.  He is a board certified Family Nurse Practitioner focusing in Emergency and Family Medicine.  Bill is currently in Family Practice in Ada, Ok at the Sovereign Medical Clinic.  Bill also has started and operated three EMS helicopter and fixed wing Emergency Air Programs since 1986. Prior to that, he has extensive experience in pre-hospital emergency medicine as a Paramedic.

Bill and his wife Sharon live in Prague and travel all of the country participating or running aviation events when not chasing trout in their favorite streams. 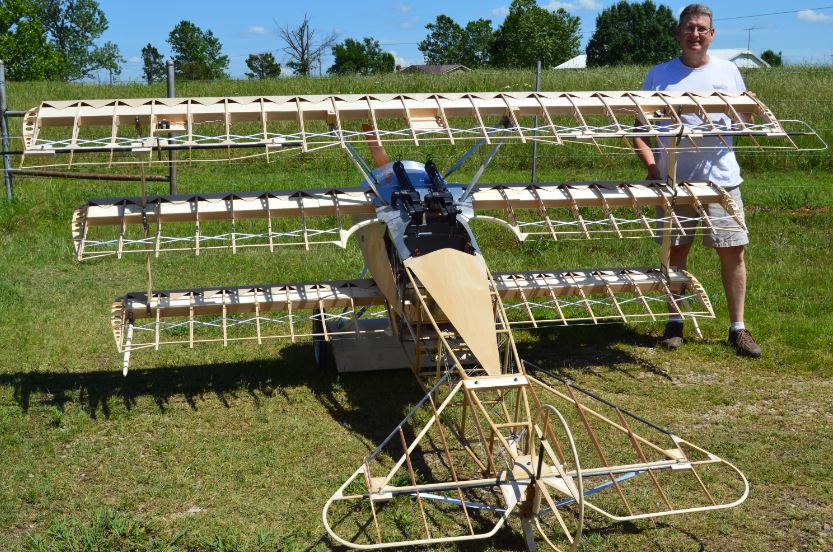