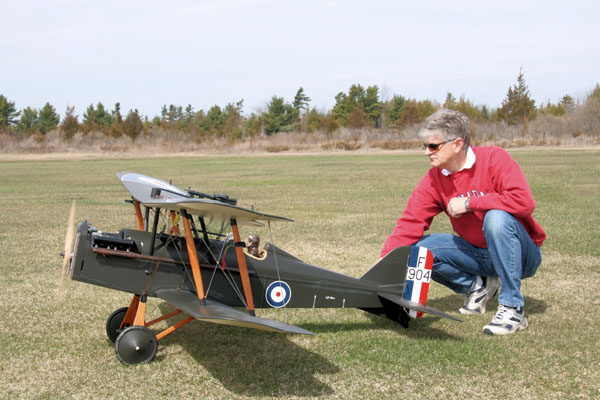 Photos and Words by Ken Park 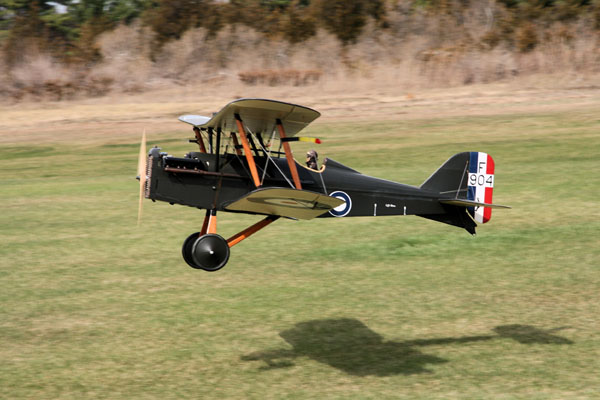 I first met Brian Perkins at the Kingston Radio Control Club last fall at the August Giant Scale IMAA event and I enjoyed seeing him beat up the flying field flying his large Spitfire.  With just one look you can tell Brian has a passion for scale and he was so much in his element.  I had no idea how much Brian was into scale until I heard that his SE5a Scout had won 1st place in Designer Scale at the Toledo show. Brian was also invited to attend Top Gun but because of his workload had to decline. In June I first got to see his super scale British biplane and it was obvious why it was Top Gun worthy. All assembled at the Kingston flying field with the Sunday morning sunshine and nothing in the background, it was impossible to tell his model from the real airplane.  Look hard at all that detail.

“I flew the SE5a for the first time this spring after spending 18 years (off and on,) building it. It is 26.5% scale, which gives a wingspan of 85 inches and a 16-inch wing chord. Weight is 21.5 pounds and is powered a new Saito FG-36 gas burning 4-stroke. I have only flown it once with the new motor so I am hoping to get some more time in to break the engine in and log some more flights.  The initial flight was very promising as the plane is so light! Once the engine is all sorted out, it’s going to be a honey!

As for awards, perhaps the most prestigious to date would be winning 1st place in Designer Scale at the 2011Toledo show.  In order to qualify for designer scale, the model must be of your own design, you must build it yourself, and you must make all the parts The exhaust tubes are aluminum cigar tubes epoxied together. The landing gear is made from hockey stick White-Ash and many parts are vacuum formed to save weight. I was hoping to compete in the upcoming Canadian Nationals competition, but I’ll have to get more flying time on it in a hurry.  I am also planning on returning to Rhinebeck NY with it this fall.”

Comments: The S.E. 5a is covered SuperShrink Coverite and with finished with sig clear, low shrink butrate dope (brushed on) followed by sprayed Brodak dope all over.

Photo by Jim Murdock – SE5a lifts off for first time 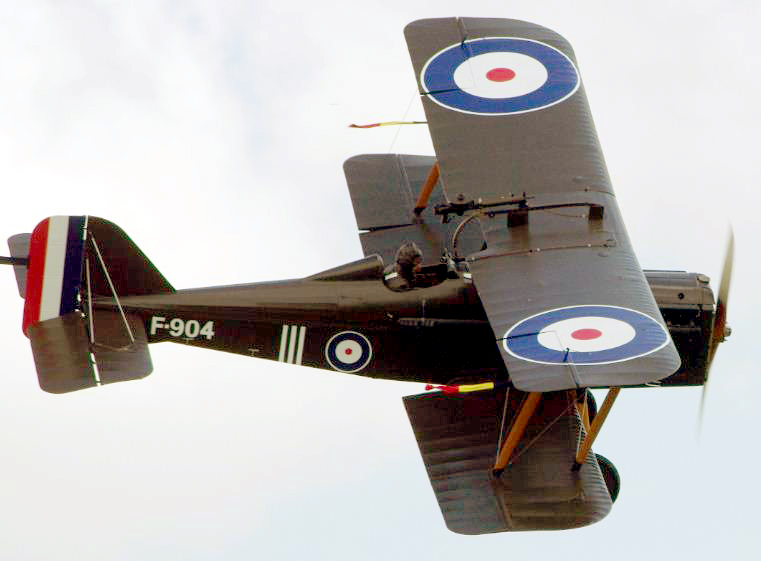 Designed by Henry P. Folland, John Kenworthy and Major Frank W. Goodden of the Royal Aircraft Factory in Farnborough, The S.E.5 (Scout Experimental 5,) was a British biplane fighter aircraft of the First World War. Although the first examples reached the Western Front before the Sopwith Camel and it had a much better overall performance, problems with its Hispano-Suiza engine, particularly the geared-output H-S 8B-powered versions, meant that there was a chronic shortage of S.E.5s until well into 1918 and fewer squadrons were equipped with the type than with the Sopwith fighter. Together with the Camel, the S.E.5 was instrumental in regaining allied air superiority in mid-1917 and maintaining this for the rest of the war.

Only 77 original S.E.5 aircraft were built before the improved S.E.5a took over production. The S.E.5a differed from the S.E.5 only in the type of engine installed which was a geared 200hp Hispano-Suiza 8b, often turning a large clockwise-rotation four-bladed propeller, replacing the 150hp model. In total 5,265 S.E.5s were built.