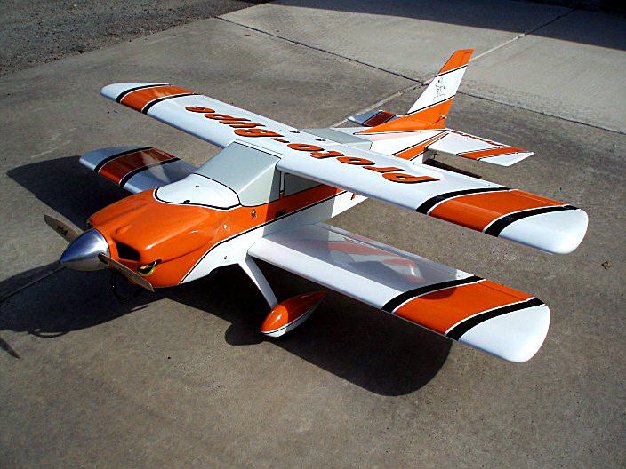 Although author Rick Michelana likes the looks of a giant-scale biplane, he didn’t want to have to spend almost
an hour setting it up at the field. His sport biplane is built-up with foam wings and covered in fiberglass, and
it uses landing gear, wheel pants, and a cowl from an ARF model. See how Rick’s giant-scale sport bipe came to life in this online how-to:

One weekend, I watched two modelers assembling their giant scale ARF biplanes at our flying field. While the look of a biplane is great, I was not impressed by the fact that it took these men almost 45 minutes to assemble their models for flight.  I thought that I might like a sport biplane without all the assembly time. Therefore, I planned to scratch build one around the following parameters:

* It had to assemble very quickly; therefore, I would not use cabanes or N-struts.
* It would be built with balsa, plywood, and foam wings.
* I would design the fuselage around a pre-existing ARF cowl.
* I would use available ARF landing gear and wheel pants.
* It would be covered in fiberglass cloth and auto paint.

The following photos will document how this giant scale sport biplane came into being. All captions are below the pictures: 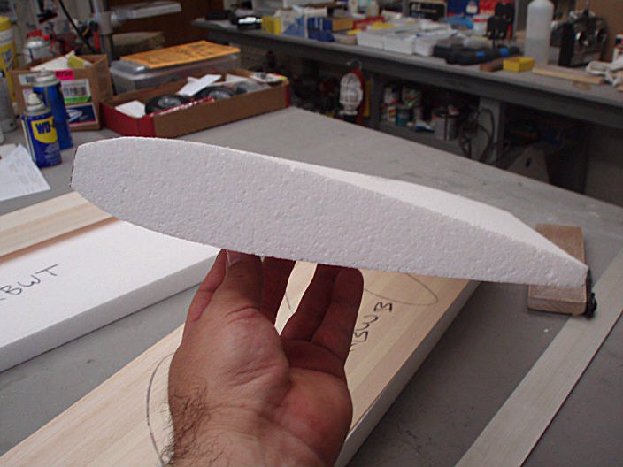 A friend and I cut four sets of foam wing cores. I cut “washout” into these fully symmetrical foam cores. These will later be sheeted with 3/32″ balsa skins that I will make. 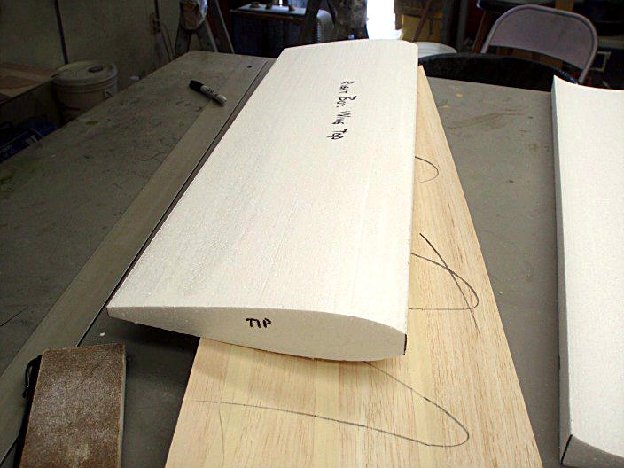 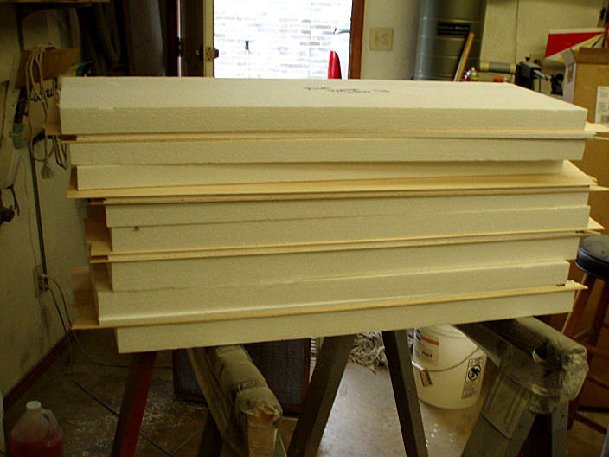 This is my stack of foam cores with all the wing skins now assembled. 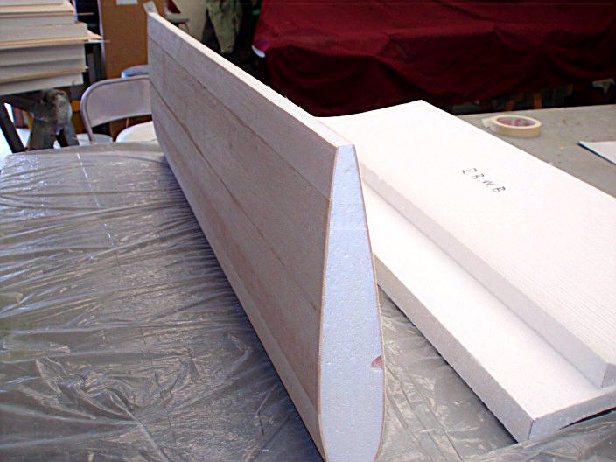 Once the wing skins have been glued on, I will attach balsa leading and trailing edges cut from balsa sheets. 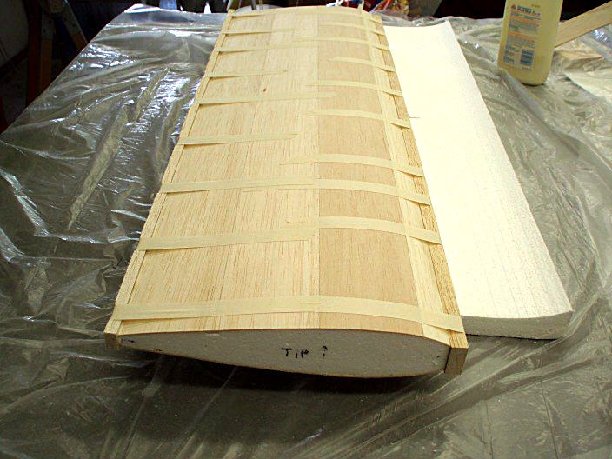 I used 1/4″ balsa in the rear and 3/8″ balsa in the front. I glued these on with Elmer’s carpenter glue and taped them in place until it dried. 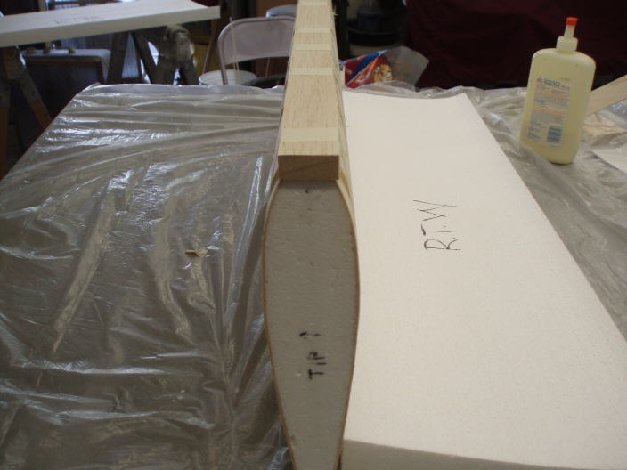 I will use a razor plane and a sanding block to create the leading edge profile. 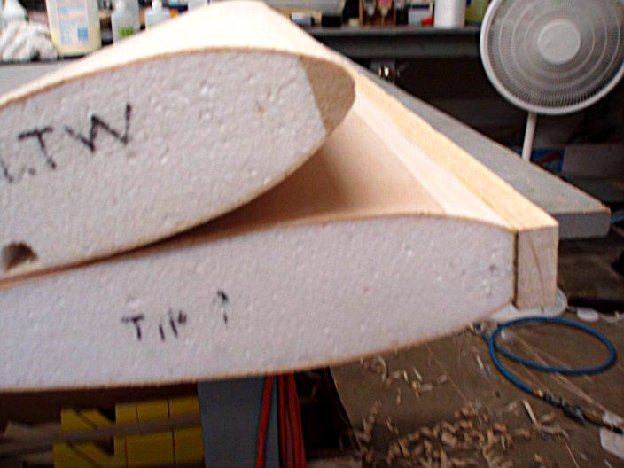 Excuse the fuzzy picture, but you can still see the finished shape verses what I began with. 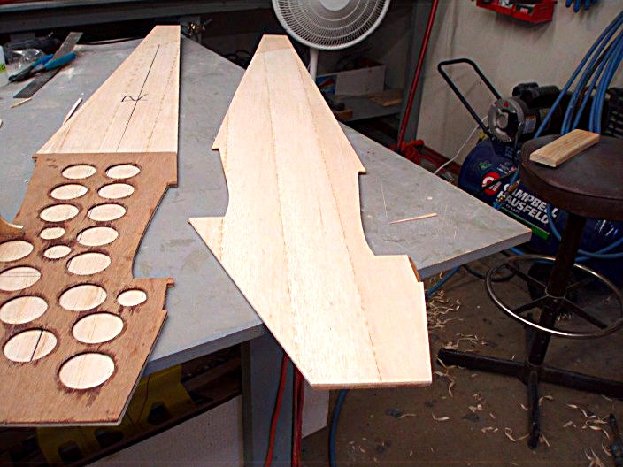 I laid out the sides of the fuselage using 1/8″ balsa. I reinforced the firewall area, tank compartment, and wing attachment points with 1/8″ Mahogany door skins purchased at a local building supply. I made two identical pieces and used a hole saw to lighten them up. 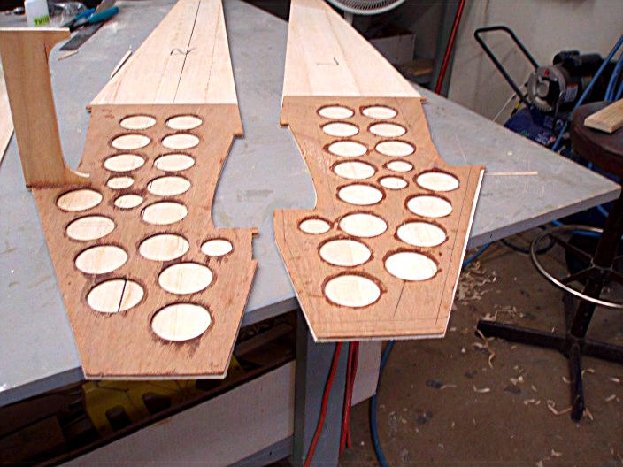 Both sides were glued with carpenters glue and weighted until the glue dried. 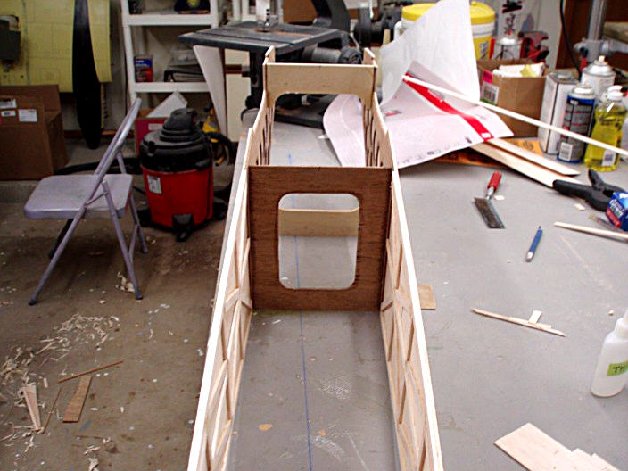 I made a front and rear bulkhead from 1/8″ door skins. I will use the blue line on my table to ensure a straight fuselage. 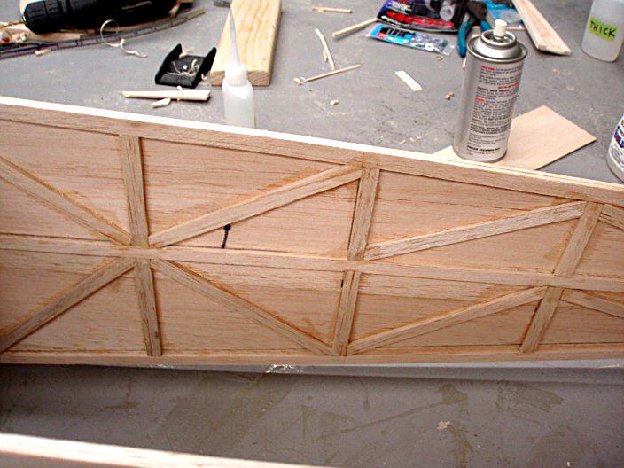 I cut 1/8″ balsa strips and glued them with CA to the inside of the rear fuselage for added strength. 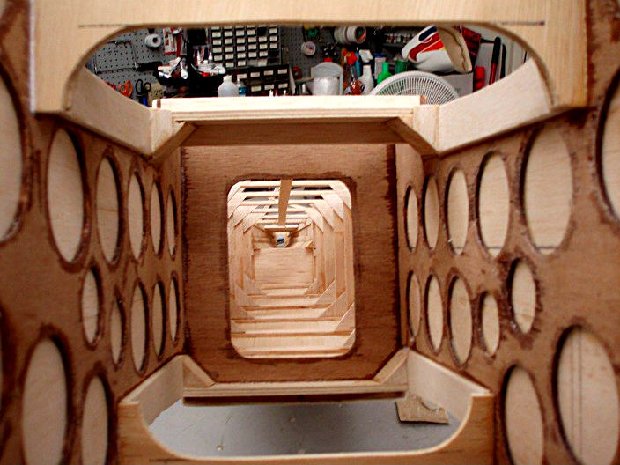 I added balsa gussets and sticks to complete the rear of the fuselage. 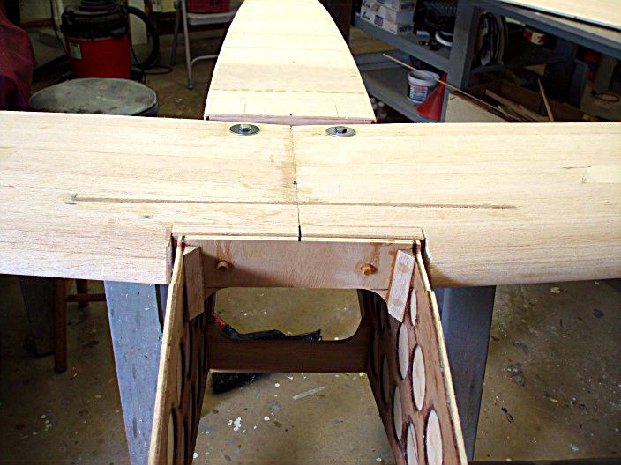 Before adding the firewall and sheeting the top of the fuselage, I drilled the wing dowel holes for both the top and bottom wings. I will employ two 1/4″ X 20 steel bolts to attach the wings to the fuselage. This technique allows this model to assemble in under five minutes. This was my first design parameter. 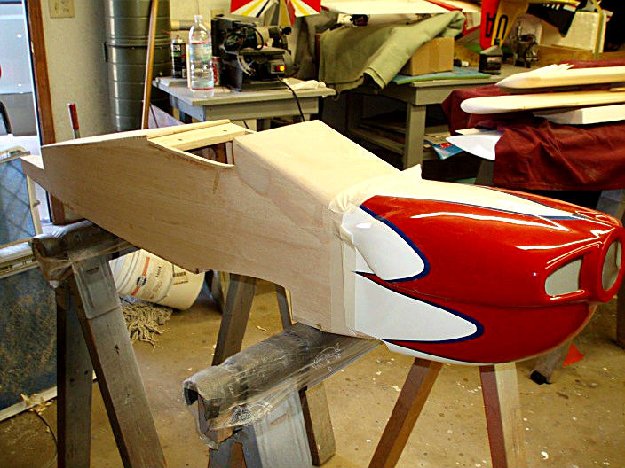 With the wings attached, I sheeted the top of the fuselage and made a fire wall that would fit a Great Planes Cap 232 cowling. My second and third goals are now established. 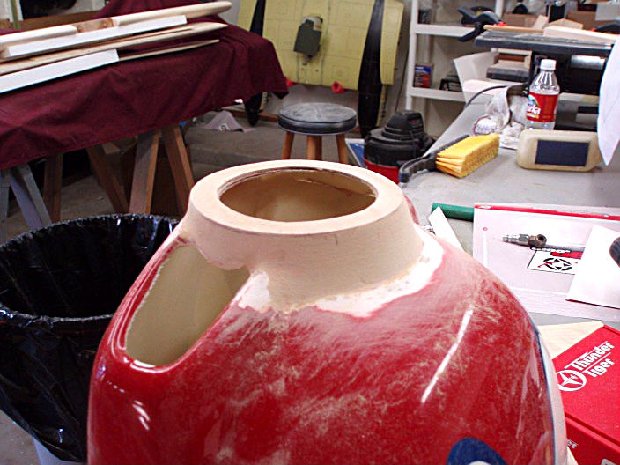 I’m using a US 41 that was lying around the shop. Since I will employ a 4″ spinner, I am making a new front ring from plywood, balsa, and some filler. 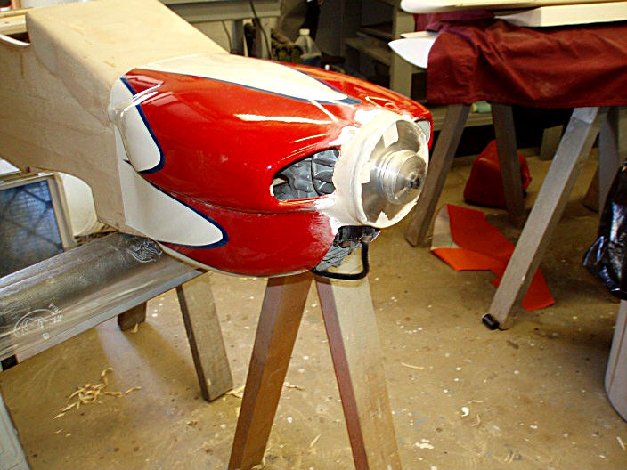 The engine is bolted on. As you can see, everything fits well. 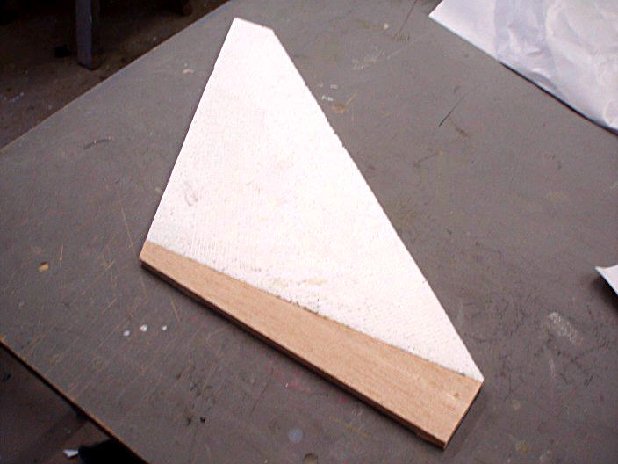 I decided to cut some 1/4″ thick foam sheets. I will clue 1/16″balsa sheet to both sides. This will create flight surfaces that are 3/8″ thick and much lighter than 3/8″ solid balsa. It is best to always build light. 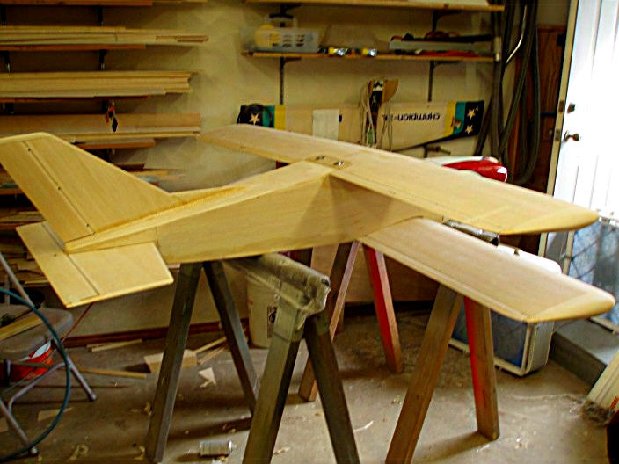 The model is now framed up. As you can see, I used two bolts per wing and no cabanes or “N” struts. This model goes together quickly at the field. 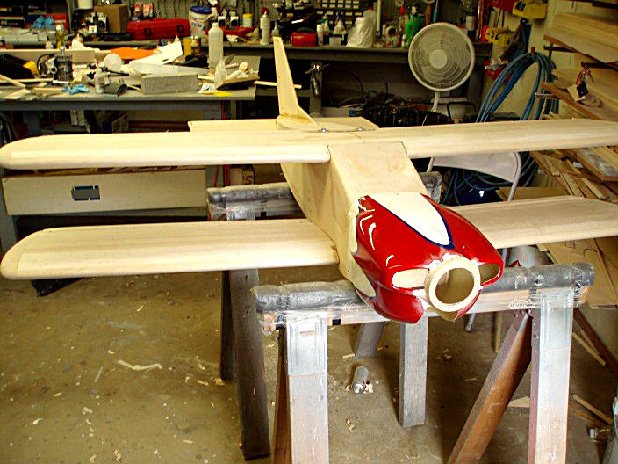 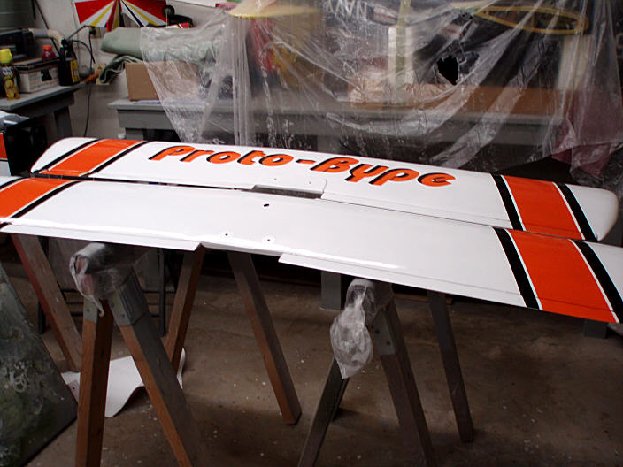 I painted the model white with orange and black trim. I went to my good friend at Sal’s Vinyl Graffix, and he made matching lettering. 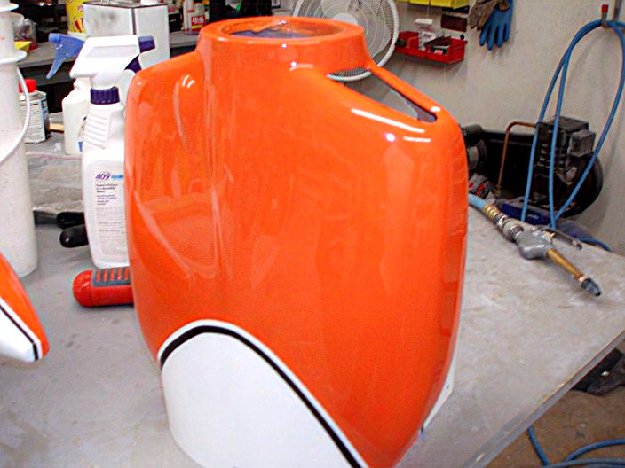 I sanded the original paint off the Great Planes fiberglass Cap 232 cowling and painted it to match the airplane. 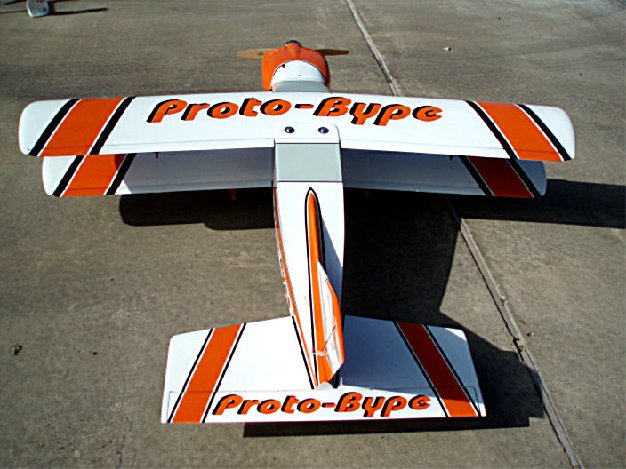 This is the finished product.

I used landing gear and wheel pants from Great Planes. 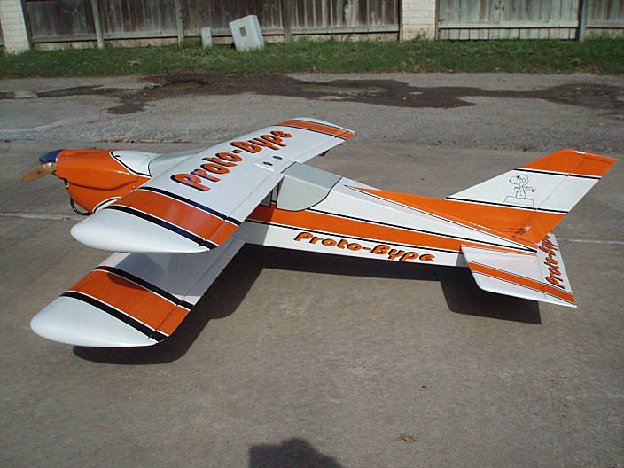 Another photo before heading out to the field. 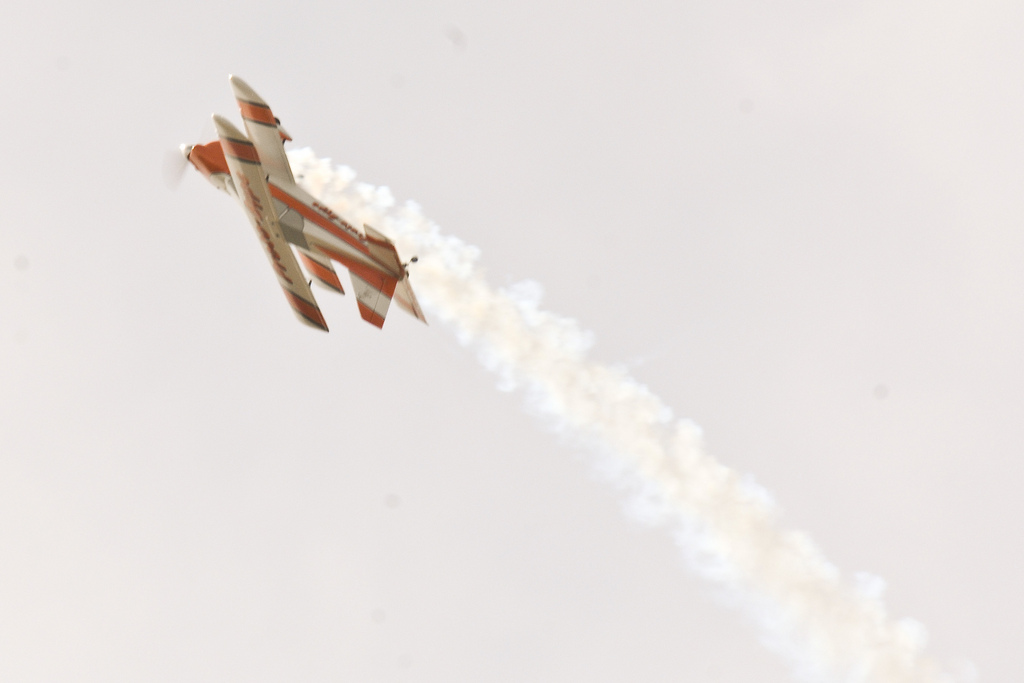 We had a cloudy day. However, the smoke system is still visible. She flies as if it were a pattern ship, and knife edge flight is great in both directions. It is not difficult to scratch build. The results are a model that no one else has.