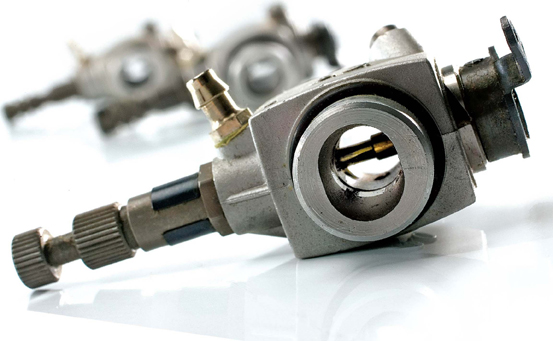 The old saying, “Takeoffs are optional, but landings are mandatory,” certainly applies to RC pilots. But if your engine is not properly adjusted, the landing pattern and touchdown can be a very iffy proposition. Two-stroke glow engines must have a solid and reliable idle; it’s even more important than all-out top-end rpm. Let’s examine the basics and see what can affect your engine’s performance. 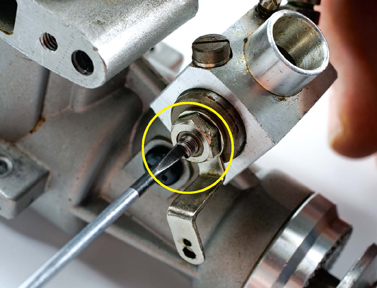 To adjust the low-end needle valve, you have to use a fine tip screwdriver. For safety’s sake, be sure to stop the engine before you adjust it. 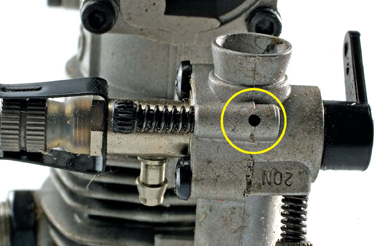 With a single-needle carb, there is a small air-bleed hole in the front for the low-end idle mixture. You adjust the mixture screw to open and close the hole to adjust amount of air that enters the carb at low throttle settings.

THE BASICS
The carburetor is the part of the engine where fuel is mixed with air before it enters the engine case. The air passes though the opening at the top of the carburetor and enters the venturi, a long tapered tube that speeds up the airflow into the engine. The increase in air velocity causes a drop in pressure, which draws the fuel from the tank. In the middle of the venturi (at the low-pressure zone) is a brass tube assembly called the spray bar. The fuel passes through the spray-bar jet and then mixes with the incoming air.

The air portion of the air/fuel mixture is regulated by the large aluminum barrel that rotates to increase and decrease the size of the intake hole. The flow of fuel is adjusted by one or two needle valves at one or both ends of the spray bar.

Older 2-stroke engines (and many 4-strokes) have a single high-end needle valve to adjust the mixture at full throttle and a small air-bleed hole in the front of the carburetor to adjust the idle mixture. As the throttle barrel closes, it opens the air-bleed hole to the venturi. A small idle-mixture screw meters the amount of air entering the carburetor. Opening the air-bleed hole lets more air in and leans the idle mixture, and closing it lets less air in to richen the mixture.

When the throttle barrel is closed, it also moves laterally, which in turn moves the low-end needle gradually into the fixed spray bar, thus leaning the idle mixture. Of the two types of carburetor, the two-needle type is more sensitive to adjustments and provides faster throttle response through the midrange.

Besides the mechanical differences between single-needle and two-needle carburetors, other things can affect your engine’s performance. Very often a poor engine idle can be traced to one or more of the following:

For a fuel system to work at its best, the tank must be located as close to the engine as possible. This is because when the nose of the plane is raised, the fuel flow is affected by gravity, and the draw lessens. Also, the tank should be positioned so its center is between 1/2 and 3/4 inch below the spray bar. This position is a good compromise and provides proper fuel flow for both a completely full tank and an almost empty one.

The size of the propeller also affects your engine’s idle performance. A larger prop with more mass provides a beneficial fly-wheel effect. Smaller, high-revving propellers such as those used with pylon-racing airplanes have less mass and don’t idle very well.

Another important factor is the engine’s glow plug. When an engine idles with an overly rich fuel mixture, the engine will begin to load up with unburned fuel in the crankcase. When the throttle is opened, this unburned fuel will transfer into the combustion chamber, quickly cooling or even killing the glow plug. If this is a recurring problem, first try to lean the idle mixture; but if it continues, use a hotter glow plug or install a plug that’s equipped with an idle bar. The bar helps shield the glow plug’s element from some of the raw fuel to maintain proper operating temperature. Also, for good sport flying, use fuel that contains at least 5 to 10 percent nitro. Using FAI fuels with no nitro content can lead to poor idling performance.

Remember, always be careful when making the high-end needle-valve adjustments, and since you’ll need to use a screwdriver, stop the engine to make the low-end idle mixture adjustments. Make all your initial needle adjustments by 1/4 turns; then, when you get closer to the idle setting, use 1/8 and 1/16 turns to home in on the ideal setting.

It is very important to obtain a reliable idle. More models are damaged because of an engine-out situation during the landing pattern than at any other time during the flight. Learn to properly adjust your carburetor and avoid that dreaded dead-stick landing! 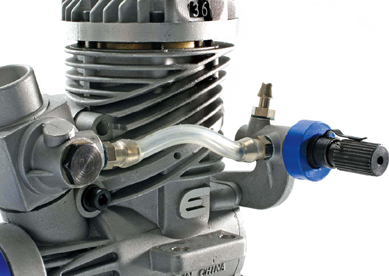 Many newer engines such as this Evolution .36 2-stroke, have their high-end needle valve assemblies placed in the rear of their engines away from the prop. It is connected to the carb with a short piece of fuel line.

Shown here with the throttle barrel fully open is the spray-bar fuel-jet assembly. The low-end needle assembly is to the left, and the fixed high-end assembly is at the right.

Here’s how I set my idle. Of course, to set up a reliable idle mixture, your engine must first be broken in properly. Be sure to install the propeller you intend to fly with the engine. Also, use a good optical tachometer to check the engine rpm.

Start the engine, let it warm up, remove the glow plug driver and open the throttle fully.