The judge directed attorney O’Grady to recall his witness. As Herring lowered himself into the witness chair, the two-surface model in hand, O’Grady asked for authorization to have the exhibit entered into evidence and summarily tagged. Hesitant to handle the delicate contraption, the court clerk came over to the witness stand to tag the exhibit. In the meantime O’Grady provided Judge Sawyer with the plaintiff’s explanation…

“Your Honor, Mr. Herring wishes to demonstrate the operation of his original 1892 two-surface machine—”

“Objection, Your Honor!” Robbins cried. “The witness is trying to turn this courtroom into a three-ring circus!”

“Your Honor,” O’Grady continued, “Mr. Herring believes strongly that a short demonstration flight will illustrate the culmination of his extensive research during the early 1890s.”

“The defense objects!” Robbins shouted. “There is no plausible reason to disrupt this proceeding. Moving outdoors for such nonsense is—”

“Excuse me,” O’Grady interrupted. “Mr. Herring is prepared to demonstrate his apparatus within the confines of this very courtroom!”

The court clerk broke the ensuing silence by sheepishly announcing, “Plaintiff’s exhibit number has already been entered, Your Honor. Perhaps a brief demonstration might be in order—”

Ignoring the clerk’s suggestions, Judge Sawyer wondered aloud as he peered at Herring’s age-yellowed contraption. “Mr. Herring, this is a courtroom, not an exhibition ground. Should your apparatus crash or stumble out of control… things may be broken! What say you, sir?”

“With all due respect to the court and its furnishings, the apparatus weighs a mere eight ounces – half a pound. It proceeds slowly through the air and will require but 15 or so seconds of the court’s time. I have prepared this historic machine to once again fly in the belief that a single demonstration may well substitute for many tedious words of summation.”

Shuffling his notes for several seconds, Sawyer raised his hands as if surrendering. “Very well, Mr. Herring. The court will allow you to show off your device. However, if things go awry there will be no excuses and certainly no second chances. Objection overruled. Proceed.”

Standing to the jury side of the witness chair, Herring took one last look at the machine’s cruciform tail adjustments before removing the safety pin. Holding the fusee pulley securely between the thumb and forefinger of his left hand, Gus turned toward the clerk’s desk 20 feet away, and motioned to the man to stand clear.

Appearing calm and unconcerned, Herring gently pushed the model forward with his right hand, while simultaneously releasing his grip on the fusee. Immediately, the twin, 16-inch propellers began spinning in opposite directions, thrusting the machine into its pre-determined turn to port. Traveling at about 10 feet per second, it flew over the front edge of the clerk’s desk and toward the massive glass chandelier in the spectator’s section.

At first, Herring thought that the model would again strike the fixture, but to his relief it passed behind the ornate lamps, flying majestically over the head of a smiling Chloe, who was seated two rows behind. Continuing its gradual arc, the model traversed the extreme rear of the room before entering the empty seating area behind the plaintiff/defendant tables. Within a foot of the ceiling, the gossamer-like model sailed steadily over the defendants, at which point the propellers abruptly stopped turning.

Three additional seconds and 20 feet of powerless gliding placed the old model directly above Herring, who calmly plucked it from midair. To the astonishment of most in the courtroom, Herring sat complacently in the witness chair… with his legs crossed!

Demonstration complete, a stunned silence ensued as observers contemplated what had just transpired. Without any prompting, spontaneous applause broke out in the spectators’ section, where curious visitors and journalists alike had gathered to view the long-awaited civil action trial.

Rather than gaveling them into a compliant silence, the smiling judge also began to clap – a signal that others might join in if they so pleased. The entire courtroom – with the exception of the defendants – celebrated what they considered to be an extraordinary accomplishment.

If you enjoyed this excerpt, pre-order the ebook for just $1.99 at DaveGierkeBooks.com. Hall of Fame recipient Dave Gierke’s lightly dramatized biographical novel is based on the brilliant but unrecognized American aviation pioneer, Augustus Moore Herring. Gierke states that unlike the Wright brothers, Herring believed that flying models were useful for developing full-size, man-carrying aeroplanes. During the 1890s Herring designed, built and flew many gravity-powered gliders and twisted rubber-powered craft. In 1902, he engineered and fabricated the world’s first practical internal combustion model airplane engine, which he used to power a successful free-flight model in January of 1903; this served as the basis for Ray Arden’s first engine in 1907. 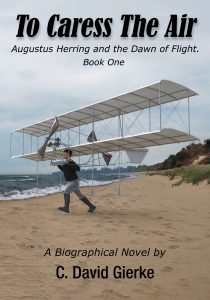