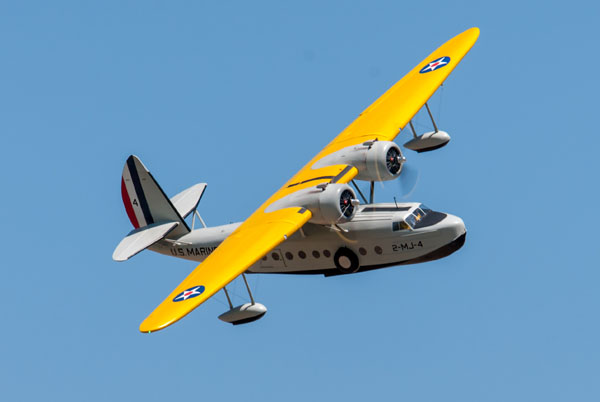 For many years, expert model designer, builder and pilot Carl Bachhuber of Mayville Wisconsin, has become famous for his amazing multi-engine giant scale airplanes. There is hardly a famous airliner or military bomber and transport that Carl hasn’t successfully built and flown. And for the most part, he usually takes less than a year to complete a project from plans to first flight. Recently, we chatted with Carl about his newest giant scale project. Here’s his inside story.

“I like building unusual aircraft and I chose the Sikorsky S-43 JRS-1 mostly because my good friend Bob Walker had an in with Kermit Weeks over at the Fantasy of Flight Museum. Kermit had just purchased Howard Hughes’ S-43 about a year earlier.  The S-43 has not been modeled all that much and I thought it looked like a fun build. I didn’t have a proper 3-view drawing with cross-sections to use to develop my woring drawing with, but Bob had an old plastic model kit which he allowed me to chop up and cut into sections which I then could scan into my ModelCAD program.” 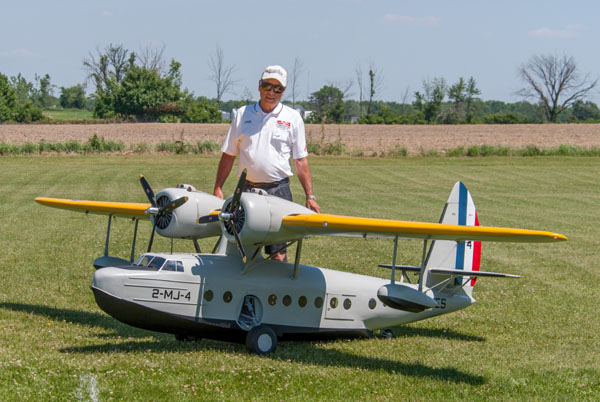 The aircraft itself is more of a sport standoff scale and the project begun in September 2013 and I finished it up in March 2014. The plane has a wingspan of 200 inches which makes it about 1/5th scale. The S-43 is powered with two Desert Aircraft DA-100 gas engines and the S-43 has a finished weight of about 110lbs. The engines came from my ill-fated Lockheed Hudson. It took 6 months to build and on May 4, 2014 the first flight lasted about a minute.  Took off very easily and climbed to about 150 ft.  I throttled back and at that point the left engine sheared off all 6 of the prop bolts.  However, the prop continuing to freewheel never left the plane.  Well after a couple of yawing turns I was able to set it down in the parking lot of the Fond du Lac field.  The plane is undamaged.  Engine is going back to DA.  These are the same engines used in the ill-fated Lockheed Hudson.

Once I had my general view drawings completed Bob started work on the pneumatic retract gear which is one his usual masterpieces!  Bob used 8-inch wheels and 1.25-inch diameter air cylinders to lift the gear and which feature Sierra Precision wheel rims and brakes. When the time came, everything just bolted into place. Bob also designed and built the tailwheel assembly. I use a Futaba 12FG transmitter and 14 Hitec RCD servos exclusively. Two 3600mAh 5-cell redundant NiCd packs power the Hitec servos and Futaba receivers.  Servos are connected to the control surfaces with short Titanium pushrods.  Control horns and ball links are all heavy-duty and are from Du-Bro Products. All the hinge points, air canisters, air connectors, and retract valves are from Robart Mfg. 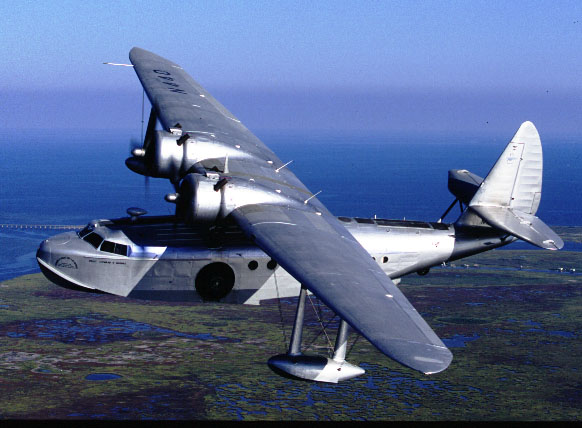 Known as the “Baby Clipper,” the S-43 first flew in 1935, and was a smaller version of the Sikorsky S-42 Clipper. It was designed to accommodate up to 25 passengers and two-crewmembers in the forward cockpit area. The S-43 was flown primarily by Pan American World Airways for service to and from Cuba and within Latin America. The aircraft was also in service in both Alaska and Hawaii and approximately 53 S-43 flying boats were built. On April 14, 1936, the S-43 piloted by Boris Sergievsky, (with a 1,100 lb. payload,) set an amphibious aircraft altitude record by reaching an altitude of 27,950 feet. Designer Igor Sikorsky was also aboard during the flight.