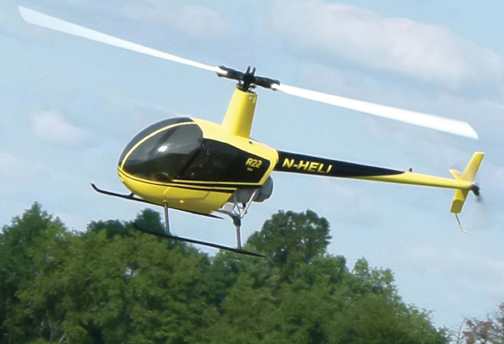 (Opener) Flybarless helis like this large Robinson R22 are rapidly taking over, but these impressive machines impose heavier demands on the servos.

Let’s address a question that seems to cause a good deal of confusion (or at least misunderstanding) among helicopter fliers—whether digital servos are really better than analog, and whether they’re worth the added cost. Servos provide the muscle to control our helicopters. In a traditional flybar heli setup for sport flying, the loads on the cyclic servos tend to be modest, and low-cost plastic-geared analog servos might work well. But switch to a flybarless head, and the servos no longer get the mechanical boost from the flybar assembly. Add in the high head speeds and abrupt control inputs typical of 3D flying and the demands on the servos get even higher.

A good many heli fliers look at the speed and torque specs and think that’s all there is to selecting the right servo. But focusing on these two metrics overlooks some important factors. Let’s address torque first because it’s the quicker to cover.

While a servo’s torque rating is a useful number, it doesn’t tell the whole story. First of all, the torque spec is determined by increasing the load until the servo stalls. Obviously, you don’t want to be loading the servo that heavily for normal use. Second, just because a servo is capable of putting out 100-inch/ounces of torque doesn’t mean the gears are up to the job. There are servos on the market that have a good chance of stripping gears near their supposed maximum load.

This is where a little common sense pays dividends. You may be tempted to use a nylon-geared micro servo that has 40 inch/ounces of torque, but think about the tiny plastic gears inside and ask yourself if that really sounds like a good idea. We’re lucky these days that metal gear servos are remarkably affordable. For any flybarless machine, I think metal gears are the better choice. But even for 450 and smaller flybar helis, metal gears last longer and fare much better in a crash.

Now let’s talk about speed. You might look at the speed specs for “equivalent” analog and digital servos and see they that have equivalent ratings, or perhaps the analog is even a little faster. But is it the better choice?

Bear in mind that the speed specs reflect how fast an unloaded servo can transit through 60 degrees. There are two problems here: First, our servos have to move a load, and for an aggressively flown heli, those loads can be significant. But more importantly, we don’t tend to bang our servos back and forth from one limit to the other. Generally we send thousands of small commands over the course of a flight, so that’s where the servo does most of its work.

A typical radio system updates the position of each servo 50 times per second—once every 20 milliseconds. Analog servos respond to these updates at the same frequency, which means for small changes they move slower and generate less torque than digital servos.

Analog servos show their limitations because most control inputs are fairly small. So, 50 times per second the servo is seeing that it needs to move just a little, so its internal electronics briefly pulse the motor in the correct direction until the feedback pot tells it it’s in the correct position. Then the motor shuts off and waits for further commands.

Because the motor is getting such short pulses of power, the analog servo neither moves as fast nor generates as much torque as its specs would lead you to expect. By the same token, if the servo is deflected by an external load, it’ll “give” a little before it really starts to put some muscle into resisting the load. You can feel this if you try to turn the output arm on an analog servo; it feels a little spongy, and the harder you turn, the more the servo growls as it tries to resist the added load.

By contrast, a digital servo’s internal microprocessor generates hundreds of control pulses per second. So for small control inputs the digital servo reacts sooner, moves faster and generates more torque. Incidentally, this high-frequency control loop is why digital servos “sing” under load rather than having the lower pitched “growl” of analog servos.

Twelve-cell 700-class helis are a major trend these days, with many manufacturers releasing updated or entirely new designs. At this year’s Toledo Expo I spent a lot of time looking at the latest 12-cell powerhouses, but one bird in particular caught my eye—the GAUI X7, distributed in the U.S. by Empire Hobby. GAUI has been around for years, but until fairly recently, this company was best known for lower-cost machines with many inexpensive injection-molded components. Over the last couple of years, GAUI has really raised its game with a growing line of advanced 3D machines featuring high-quality aluminum and carbon-fiber construction and innovative design features. With the X7 GAUI has really arrived in the top ranks. I spent nearly an hour discussing the X7 with Andy “Pinoy” Panoncillo, and the longer I looked, the cooler things I saw.

DIRECT SERVO LINKAGES: Many large helis use bellcranks and pull-pull servo linkages to give the servos as much leverage (and protection) as possible. While this is a sound approach, it makes for additional complexity (a large flybar-style heli has around 30 ball linkages to adjust and maintain). With its flybarless head and direct servo linkages, the X7 reduces this number to 10. This approach is made practical by the new generation of incredibly powerful high-voltage digital servos. The end result is a tighter, simpler, faster control setup. On the X7’s flybarless head the beefy pitch control tubes ride in a pair of yokes, eliminating the need for a conventional swash follower. Everything is done to make the machine simple and reliable.

SIMPLER FRAMES: With large helis now being designed from the ground up for electric power, features like battery accessibility are getting more attention. The X7 has a remarkably clean and simple frame design, with the batteries under slung in a saddlebag arrangement. The stout carbon side frames have narrow spacing for greater torsional stiffness, and all components are easily accessible. The frame also incorporates breakaway mounts for the landing skids. These help to localize damage, making repairs faster and cheaper.

TAIL DESIGN: One of my favorite details was at the end of the torque tube tail boom. The X7’s tail gear case is CNC machined from a single piece of aluminum billet! The result is a beautiful unit that is light, stiff and nearly indestructible. The tail pitch control links are secured with both press-fit washers and set screws. These details show how nothing has been left to chance on this heli.

All in all, the GAUI X7 packs impressive features into a kit with a street price under $900. Add on a high performance motor like the Scorpion 4035–500, a flybarless unit like the Mikado V-Bar or Micro-Beast and high-power servos like JR’s DS8717HV, and you have a truly outstanding machine. If you’re shopping for an unlimited 3D heli, the X7 should be on your short list.

The GAUI X7 is one of the most impressive of the recent crop of powerful 12-cell 700 class helis.

Designs and materials for full-size servos have advanced a lot in recent years, and these improvements are finding their way into micro servos. These Spektrum H3000s have features formerly seen only in much larger (and more expensive) servos; aluminum center case, beefy mounting lugs and very tight metal gears.

The lesson here is that even if an analog servo looks faster or stronger on paper, in the real world of constant small control corrections, the digital servo will generally outperform its analog cousin. You can even see this if you try to turn a digital servo by hand; the output arm will resist much more aggressively.

Naturally, all this comes at a cost, and the one significant downside to digital servos is that they consume a lot more power than analog versions. This is why today you see refinements like specialized heli receivers with high power inputs, high-capacity external BEC units and regulated 2S LiPo receiver packs. If you’re going to go digital, make sure you provide sufficient power, especially with 2.4GHz radio systems that can reboot if the voltage sags too low.

So, what can we take from this? Are analog servos always a poor choice? Well, not always. Honestly, for a conventional flybar heli, particularly for beginners and for sport flying, analog servos can work just fine, and I have several helis in my fleet that are so equipped. But for more demanding flybarless applications and for full-on aerobatics, digital servos are well worth the added cost.