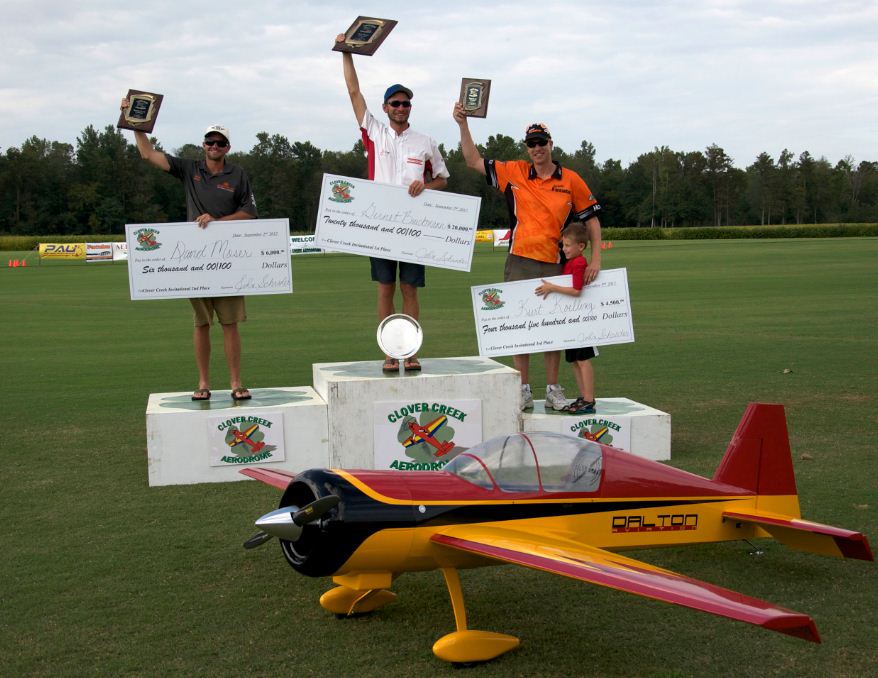 Top three finishers Gernot Bruckmann, David Moser, and Kurt Koelling standing tall and proud! In the foreground is the plane that Tony Russo from Dalton Aviation had built and finished for the event raffle.

Pilots started pulling into Toone, Tennessee about a week before the contest and the weather couldn’t have been better! Clear skies, light winds … the pilots were getting fired up to compete for the first place prize of $20,000! However, with Hurricane Isaac moving up the Gulf Coast and predicted to head straight toward Tennessee, the 2012 Clover Creek Invitational did not look too promising to take place over Labor Day weekend.

It wasn’t until Wednesday afternoon when weather forecasters had predicted the worse — 40% chance of rain on the opening day of the contest, and then a wash out for the remainder of the event! With only a few hours remaining until the pilots meeting, the event staff had a brief chat and quickly decided to change the schedule of events for Thursday. At the pilots meeting we announced these changes and all 16 pilots were receptive to the change and received instructions to be at the flying field and ready to fly at 7:00am! We concluded the pilots meeting by drawing for flight order and then handed out Unknown ‘A’.

Thursday morning arrived and we started right on time. The first pilot had taken to the air at 7:00am sharp and we were now under way. There were only a few times when the weather forced us to stop flying to allow some mild showers pass by, but we still managed to log a total of 96 flights and finished the day at 7:05pm. Those flights included 4 single sequence Known ‘A’ rounds, an Unknown ‘A’ sequence and even a Freestyle! The pilots worked tirelessly and poured every ounce of energy into their flying as it could have been the only day we had to fly! Everybody packed up and was ready to call it a night, leaving with a predicted weather forecast for Friday of 70% chance of rain.

Saturday’s flying ended with a fantastic sunset and everyone left to get ready for the banquet at 6:30pm. The food served was really delicious and was prepared by Tina Schroder, Pam Moser, and Cheryl Jorsenson. As a matter of fact, these fine ladies had prepared food for the volunteers, event staff, and judges every day and night for the entire week! At the banquet we were treated with a 25 minute video complied of some fantastic footage that was captured by a family friend of Nicolas Detry from France. He had taken these video clips over the first three days of competition and it was really an enjoyment to watch while having dinner. At the banquet, Joe Cutright (contest director) had acknowledged all of the volunteers by calling them up individually and allowing them to pick out several prizes that were graciously donated by some of our sponsors. He then went on to thank all of the event staff as well as the judges. But the primary reason of the banquet was to announce the top 10 finalist that would go on to compete on Sunday, the final day of competition.

With talented pilots attending from the U.S., and all the way from Italy, France, Canada, Puerto Rico, Austria, and Australia, it was very hard to announce the standings of 11-16. All of the competitors are very accomplished and deserved to make the cut, but only the top 10 finalist would go on to compete on the final day of competition. Gernot Bruckmann was announced as the first place qualifier after three days of competition. It should also be noted that he finished with a perfect raw score and was over 500 points in front of second place! It was safe to say that Gernot had come well prepared for this event. The top ten pilots to move forward were Gernot Bruckmann, Jason Shulman, David Moser, Nicolas Pinzon, Kurt Koelling, Frank Noll Jr., Nicolas Detry, Gabriel Altuz Jr., Matthew Stringer, and Will Berninger.

On Sunday, the finalist started with a clean slate and a new contest in itself. They flew 2 single sequence rounds of Known ‘C’, Unknown ‘D’ and ‘E’, as well as 2 Freestyles. Each pilot kept his best score in each category to determine the winner. Should there have been a tie on the final day, we would have gone back to final standings on Saturday to determine the winner.

The weather forecast for Sunday was no chance of rain – wrong, again!  We had some very light sprinkles in the morning and the winds picked up for a while, but by day’s end, the sun was shining down upon us! The flying was spectacular to say the least. Unfortunately Nicolas Detry’s aircraft had suffered some structural damage that prevented him from finishing the contest. David Moser’s aircraft also suffered some structural damage on his last Known sequence early in the flight, yet he continued to fly his aircraft hard to finish the contest. Kurt Koelling had pushed the envelope as well, crashing his freestyle plane in the bean field during his last flight of the day. Fortunately his aircraft suffered minor damage and will be able to fly again. Gernot Bruckmann had flown some very well choreographed freestyle routines and was on mark as usual. Gabriel Altuz was
the last pilot to fly Freestyle and he put on a show that will always be remembered as well as allowing him to win that round of Freestyle!

All the pilots had given everything they had and were mentally exhausted by the end of the competition. They flew like the true champions they are and all should be proud of how they finished. The competitors comprised some of the best in the world and they all did absolutely fantastic! With all the scores tallied, Gernot Bruckmann pulled off the win with only 29 points in front of second place! David Moser came in second followed by Kurt Koelling, Nicolas Pinzon, Jason Shulman, Gabriel Altuz, Matthew Stringer, Will Berninger, Nicolas Detry and Frank Noll.

The 2012 Clover Creek Invitational was another success! Debuting in 2008, Clover Creek is now known worldwide! We can boldly make that claim as we had judges and pilots attend from The Netherlands, Norway, Canada, France, Italy, Austria, Puerto Rico, Australia and all across the United States! Thank you to all that had attended and made this event what is was and what it will be in the future! –Joe Cutright

Gernot Buckmann (Austria), Filippo Materazzi (Italy), Nicolas Detry (France) along with their fathers take a moment out of their busy day for a quick photo.

John Schroder making his rounds during one of the practice days. John Schroders vision and dream started in 2008 and has now become a World reknown competiton!