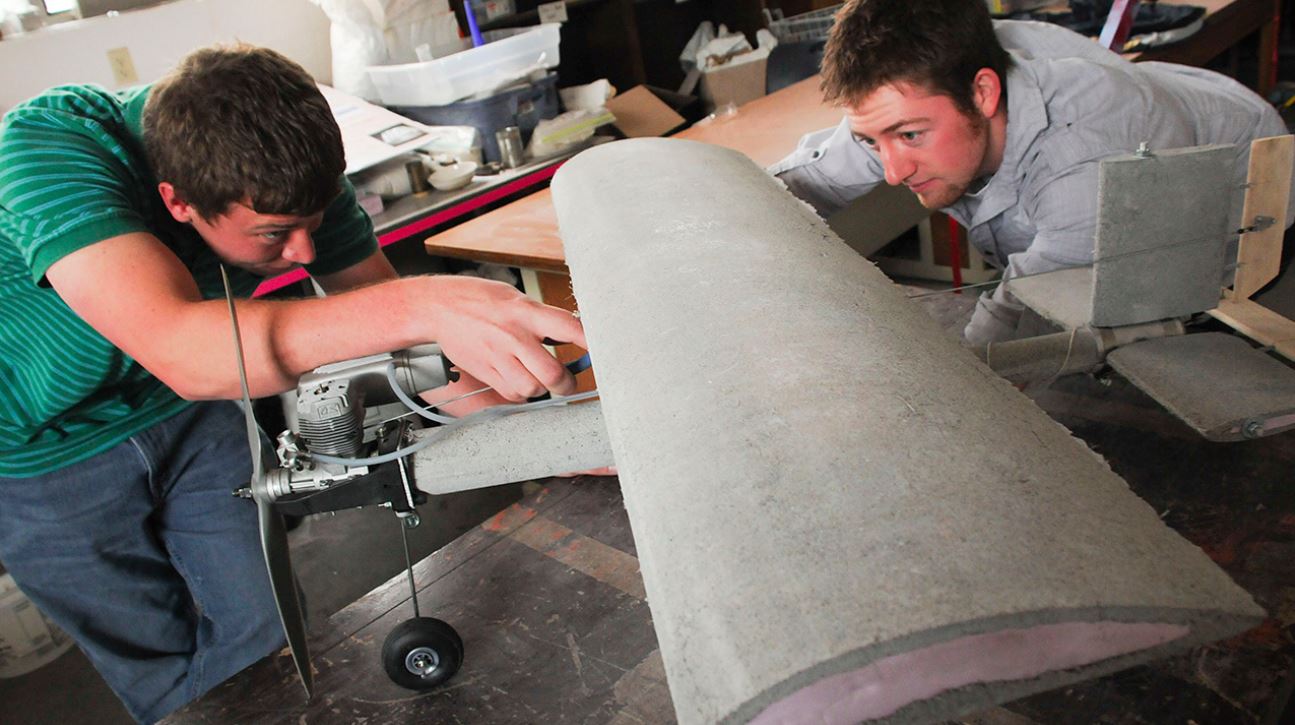 South Dakota School of Mines & Technology students David Haberman and Tyler Pojanowski  were the first to fly and safely land an 18-pound RC concrete aircraft. The flight was quick and wobbly with the landing equally erratic, but it was enough for the record books. The 18-pound plane held its own during a crash landing to become the second known concrete plane to fly and the only one to stay intact upon landing.

The only other concrete airplane known to have flown was designed at the prestigious Embry-Riddle Aeronautical University in Daytona Beach, Fla. That plane crashed and was destroyed, according to Mines advisor, M.R. Hansen, Ph.D., an expert in concrete design. “My friend, Dr. Mark Fugler, concrete advisor at ERAU, was my inspiration to try this project. Their concrete airplane did fly first and proved that it could be done. Our goal was to do that and have it land safely.”

Mission accomplished: “Ours flew and sustained some damage on landing but was not destroyed. So, you could say this is the first concrete airplane to fly and land,” said Hansen, who notified Embry-Riddle of the School of Mines’ milestone.

The plane, with a wingspan of 40 inches, was designed and built entirely by three SDSM&T seniors who recently graduated. David Haberman and Tyler Pojanowski, both mechanical engineering majors, and Seth Adams, a civil and environmental engineering major, worked on the plane for a year as part of their senior design project. Hansen and Lidvin Kjerengtroen, Ph.D., advised them throughout. The group had just one shot to test a year’s worth of work.

Watching the concrete plane taxi 200 feet along the runway at the Central States Fairgrounds was a bit unnerving, said Pojanowski. “I was really nervous. We put a lot of time into it to see if it would work or not, and once it took flight I was shocked. The numbers said it would fly, but numbers and actually seeing it fly are two different things. Seeing it was exciting and proved that what we did during the semester was true,” Pojanowski said.

Haberman produced calculations to determine the take-off and lift distances, and what he projected is what they saw. The main goal was for the plane to take flight and to survive the landing. Once the wheels were off the ground it was over in a matter of mere seconds, thanks to weight-balance issues associated with flying any plane. “There wasn’t much time because once it got air it just went over, it flipped over. I was freaked because I was really close to it and was worried it was going to hit me,” Pojanowski said.

Though made with carbon fiber reinforcement, it is concrete, after all, and a bold, yet fragile design to attempt to fly. And once it comes crashing down it would not be unreasonable to expect disintegration. In fact, that was Haberman’s initial thoughts when he saw a cloud of dust. “I was initially kind of disappointed because I saw a puff of smoke and thought it had exploded. I was excited to see it all in one piece. I think the smoke was some of the concrete kind of grounded against the asphalt,” explained Haberman, who was operating the remote control.

The plane sustained a crack in the fuselage and wing but otherwise remained intact, thanks in part to the students’ design plans and decision to reinforce the concrete to a safety factor of two, which meant it was twice as strong as it needed to be: strong without being too heavy. Adams, one of Hansen’s students, used the same concrete mixture that went into the university’s award-winning concrete canoe. It’s a light mixture with extra carbon fiber reinforcement.

“Everything in aviation you want to be high strength and low weight, and concrete is the exact opposite. That’s why the professors did the project, to challenge engineers, to see what we could do. The thing I’m most proud of is … we did it with two MEs (mechanical engineers) and one civil (engineer),” Haberman said, pointing out their success was accomplished with a small team. The issues with the plane flipping on its back while in flight weren’t completely unexpected. Learning to balance a remote-controlled plane while in flight is tricky and requires practice, a unique problem for students who hoped for a smooth landing so they could display their concrete airplane afterward at the Senior Design Fair.

“There is a lot more to aerodynamics and landing a plane than people realize. Even a regular remote-controlled plane of this size, which would normally weigh 4 to 5 pounds, those are hard to get up in the air and land,” Haberman said. “Landing wasn’t as big of a priority. The goal wasn’t so much to get it to land or even fly it around that much. It was more to get it up in the air and to prove that we could fly it and get it off the ground.” Which they certainly did.

“We could’ve tried to fly this one again just to prove it flew again and to try and see if we could land it more softly, but we just wanted to leave something to the school to show what we did, and leave it in one piece,” said Haberman, adding that the history-making concrete airplane will hang on display in the SDSM&T’s Center for Advanced Manufacturing and Production laboratory. Hansen is already looking ahead to the next challenge. “Phase III, hopefully next year, will add servo-controlled ailerons to control turning and help with a smooth landing,” he said. 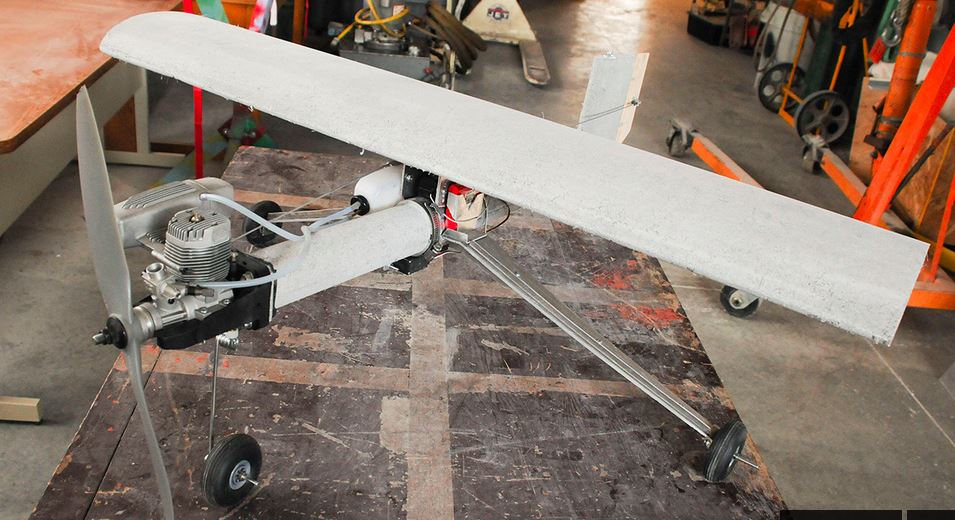