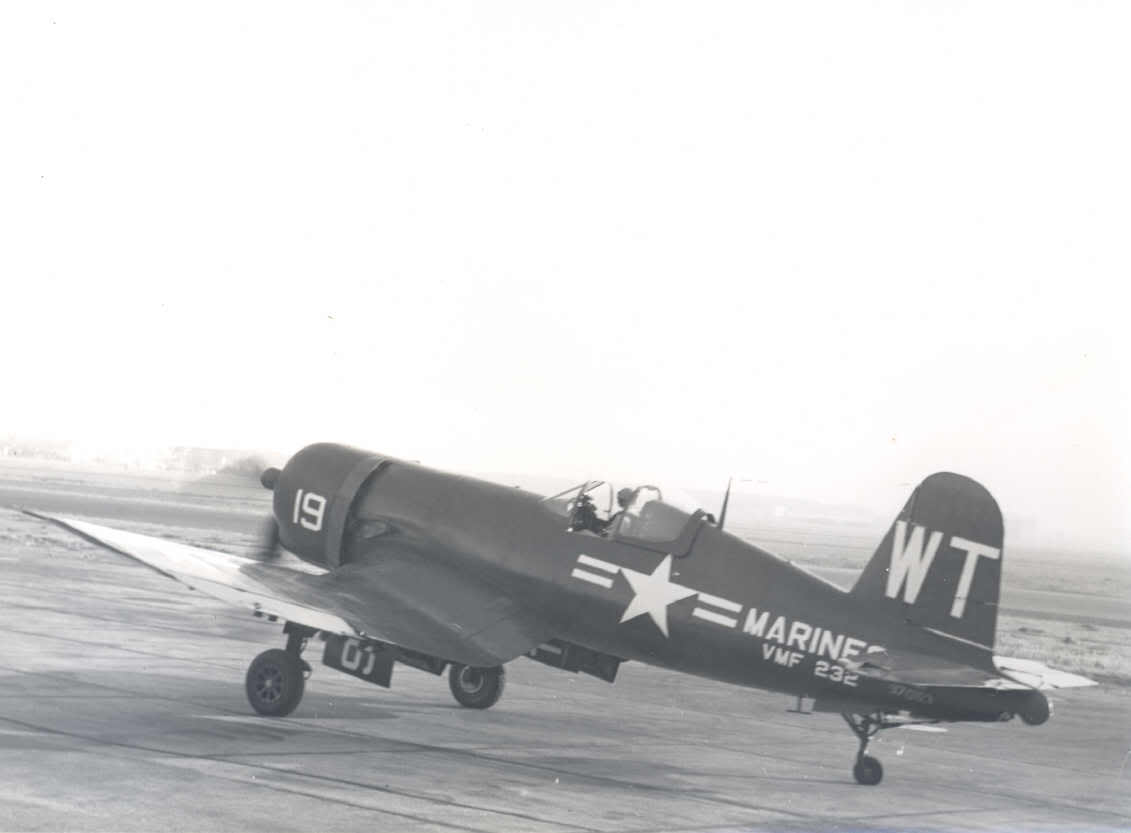 One of the great things about scale RC airplanes is that they give us an opportunity to learn more about history. The new giant scale F4U Corsair from Top Flite is a beautiful airplane and with a 55cc gas engine in the nose it will be a great warbird performer. The only thing wrong with ARFs is they all look alike and since this new Corsair has the same decals as its smaller 60 -90 size hangar mate, I wanted to make it look a little different. 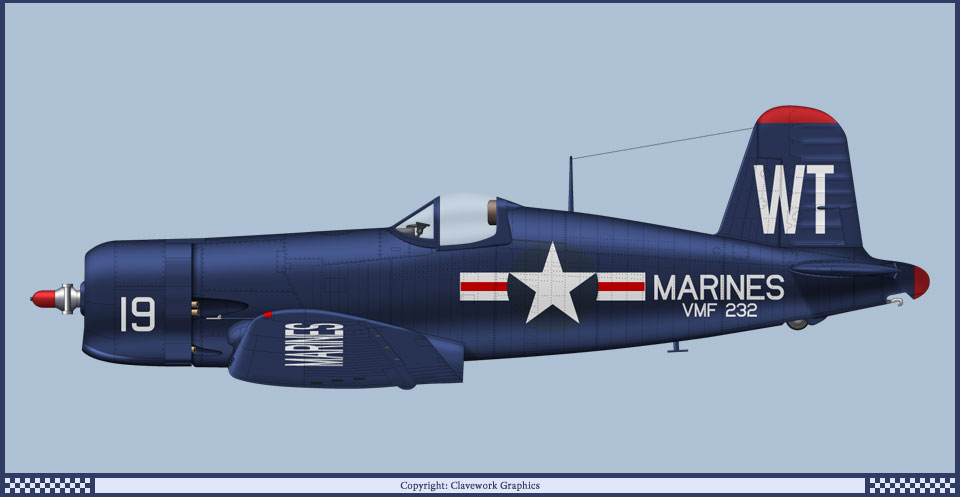 (Above) profile print of my subject Corsair. It is from the VMF 232 “Red Devils” Fighter squadron.

So, instead of a Navy fighter, I am going to use markings for a MARINES Corsair and had my friends over at Red5 Graphics cut some markings using a PDF file I produced with my CAD program. I also using a famous Marine pilot for the cockpit in the form of a Pappy Boyington figure hand painted by my buddy Lyle Vasser over at Best Pilots. That should do it as far as looking a little different and standing out a bit on the flightline. 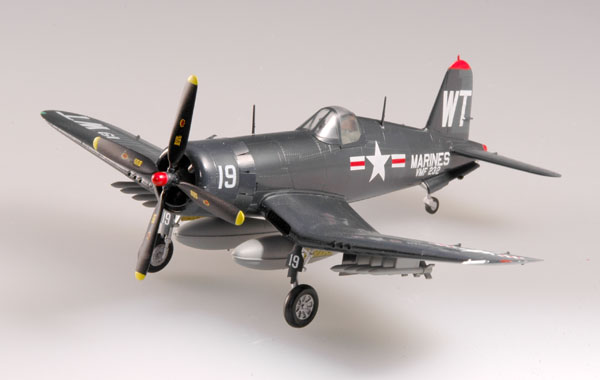 (Above) There are plenty of Scale Plastic Model sites on the web and they are a great source for markings guidance. Plastic modelers are known for their passion for scale accuracy.

Below are some other photos I grabbed from the internet and used as a guide to make my model, though not intended for scale competition, as accurate as I could make it. Some are not of the actual subject aircraft, but are good for figuring out how things should look like. 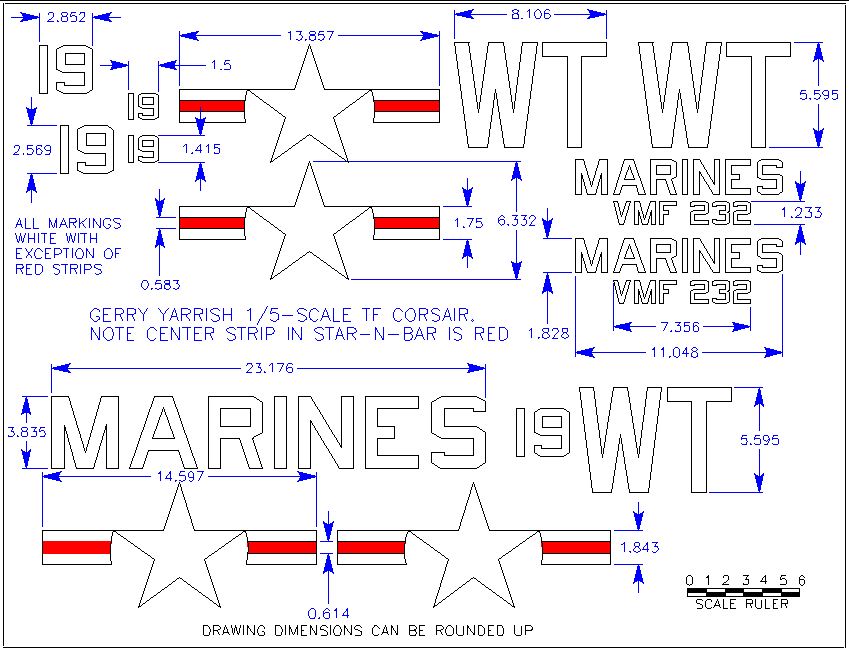 Here’s my CAD file for the MARINES Corsair aircraft markings. I used photos and a scale ratio to figure out the size and spacings. Also, while I was at the Toledo show where I saw the airplane for the first time, I was told, Top Flite decided to offer the plane without the decals applied to the plane to give the modelers the ability to decorate their planes the way they wanted… it does come with the popular US Navy no. 29 decals. 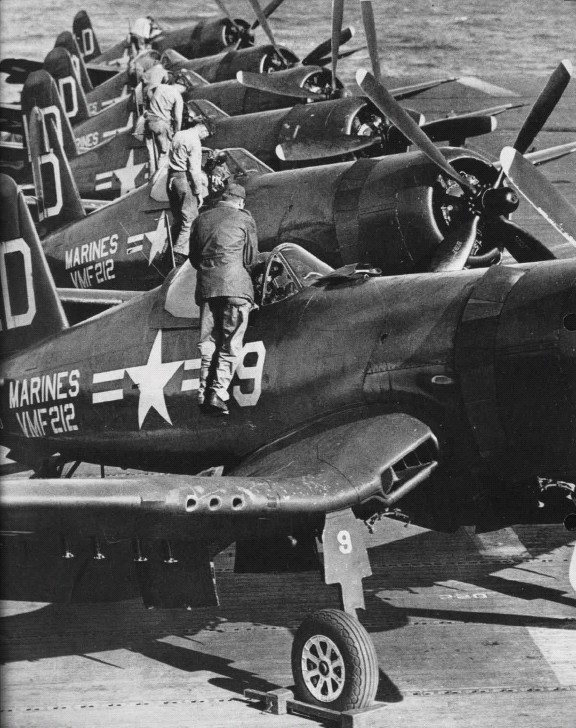 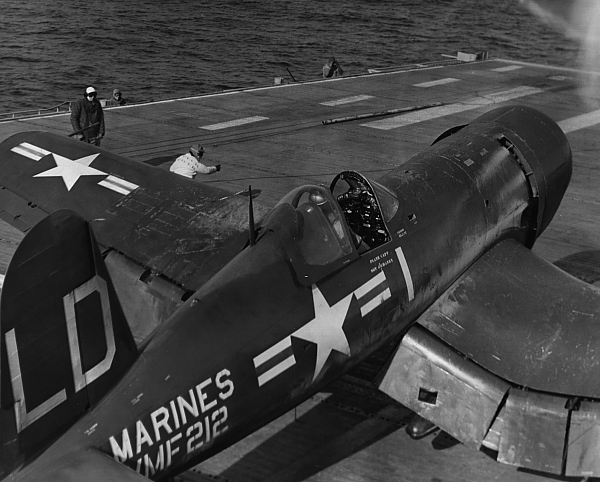 A bit of History (Courtesy of wikipedia.org)

In July 1945 the VMTB-232 “Red Devils” torpedo/bomber squadron began to fly strikes against the Japanese mainland until the surrender of Japan. The price of victory did not come cheaply. During its participation in operations throughout World War II, VMTB-232 lost 49 Marines and seventeen aircraft. On November 16, 1945, the squadron, one of the few to earn two presidential citations during the war, arrived at San Diego, and was temporarily decommissioned.

On June 3, 1948 the Red Devils were reactivated as a reserve fighter squadron at NAS Bennet Field, New York, with the name it currently holds; “Marine Fighter Attack Squadron 232”. With the outbreak of hostilities in Korea, the squadron was placed on alert and ordered to Marine Corps Air Station El Toro, California. There, the squadron received its first delivery of F4U Corsairs. Although the unit itself did not deploy to Korea, by April 1951 nearly all the original aviators and forty percent of the enlisted Marines in the squadron had been detached and sent overseas for combat duty.

In March 1953, the Red Devils transitioned to the jet age with the receipt of the Grumman F9F Panther.