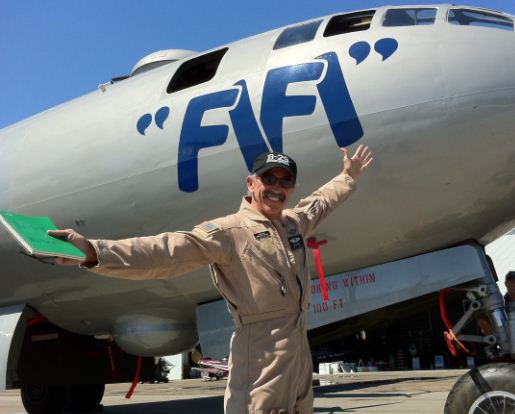 Not only is Aaron Tippin a world-famous country singer, he’s also an accomplished pilot! He recently completed his check ride in “Fifi,” the only B-29 Superfortress still flying today. Here’s his story:

“Getting checked out in the B-29 on this beautiful September day is a lifelong dream and the coolest thing ever”, Tippin exclaims. Now Aaron can say that he is the ONLY country star that can fly the B29, land it, and perform a concert on the wing.  Aaron and “FiFi” have been a part of the Red, White, and Loud tour this year. Tippin is the spokesperson for Commemorative Air Force (CAF).

About the FIFI, CAF’s B-29 Superfortress:
When the Commemorative Air Force (then Confederate Air Force) began searching for a B-29 for its collection of historical military aircraft, World War II had been over for 21 years. The Superfortress that helped end it had long since yielded to new generations of jet-powered strategic bombers and vanished. According to the United States Air Force, no B-29s remained in inventory, even at storage or disposal depots—until CAF discovered FIFI.

FIFI’s complete restoration was a long and expensive project involving more than three years of fund-raising and hard work. Late in 1974, FIFI joined the other World War II fighters and bombers to preserve the memories and teach lessons of mankind’s greatest war. For more information visit www.cafb29b24.org.

“While this is history in the making, for me, this is an opportunity of a lifetime to bring aviators and country fans together,” Tippin said. “My kind of country music is patriotic and all-American, so my involvement with CAF and the Red, White & Loud Tour is on target to generate excitement with both aviation and country music enthusiasts.”