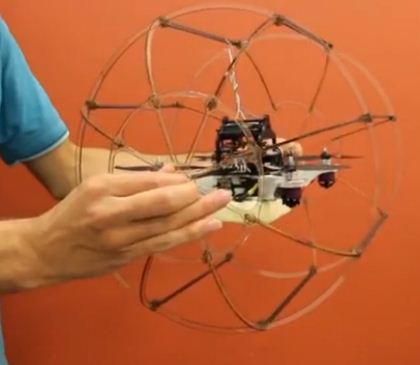 This hybrid flyer dubbed “HyTAQ” from the Robotics Lab at the Illinois Institute of Technology can fly over obstacles as well as roll on the ground when it’s too windy or to save on power. The quadcopter inside the cylinder is attached via shafts to the outer “wheels,” so it can roll in any direction.  Darren Quick of Gizmag writes: “With the quadrotors providing thrust for both aerial and terrestrial locomotion, there’s no requirement for additional actuators … When on the ground, the rolling cage means the robot only needs to overcome rolling resistance to move forward, and when it encounters an obstacle to difficult to roll over, it can simply take to the air to jump over it.

The developers say the robot’s hybrid nature makes it much more energy efficient than aerial-only systems, with the ability to operate almost six times as long and travel a distance four times greater than such systems. …The cage itself is constructed out of polycarbonate and carbon fiber making it both flexible and strong enough to withstand crashing.” Check out the video below, and for the full story click here.